Why You Should Be Informed (with 8 Tips to Become Informed) 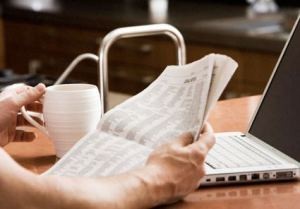 We Live In the Age of Information

Between 1750 and 1900, the total expanse of human knowledge had doubled. At that time of pre-technology human history, it took 150 years. Today, the growth of knowledge is occurring some 100 times faster. It is said that the entire sum of all known information, i.e., human knowledge, doubles every 1.5 years. By 2020 it is estimated that it will be doubling approximately every month and a half (72 days). Think about that…

This Information Age is one in which the average illiterate person, one unable to read or write – but who can understand language and watch videos – can easily learn more about science than those towering figures of centuries past like Louis Pascal and Isaac Newton. Another example: a 5 year old child holding a smart phone possess more technology than was required to send a man to the moon only 40+ years ago.

In a recent study by the University of California, San Diego, researchers found that we swim in a boundless sea of information, one in which the average American consumes 16 hard drives of information every day, be it through TV, radio, the Internet/computer, reading, and other digital devices. That means that Americans as a total consume 3.6 zettabytes every day, or 34 gigabytes per person. Ironically, with this enormous access to literally unlimited data, one in which we can learn everything about everything, the average American is not very informed about the world in which we live.

Note that I’m not saying that Americans don’t know very much, because we do. It’s just that the “average American” is simply uninformed to a large degree about the ultimate things that matter and that affect one’s life. Whether this ignorance is apathy, indifference, or something else, I do not know; but there is a relatively high level of societal ignorance considering the fact that our culture is awash in an infinity of information.

For example, while most people have instant recall on trivia like their friend’s speed dial numbers, their favorite TV shows’ times, nuances of their favorite video games or movies, most people seem to live without a working knowledge of what is truly important: civics, economics, politics, and especially spiritual and scriptural truth.

One might say, “Who really cares?” It may seem that not knowing much about the stock market, the strength of US currency, trade deficits, political processes, the separation of power, representation and taxation, healthcare, and things like that “makes no difference.” Some think that ignorance is bliss because, they reason, we can’t do anything about it anyway.

My response is many-fold, but if I were to reply, I would use these three brief answers:

1. Christians shouldn’t be ignorant about the world, because Jesus wasn’t.

For Christians, we should keep in mind that (of all people) Jesus himself had a working knowledge of those things, and he informed His disciples about them. He spoke more about money than he did the subject of “heaven!” In the gospels, Jesus shows familiarity with the Roman Empire and its government, the geo-political set up present in Judea and greater Jerusalem, and a deep familiarity with law, justice, economics, and even taxes. If Jesus did that – and frequently taught his own disciples on issues of those sorts – it can be argued that we should do the same as Christians.

2. Being uninformed leaves you open to exploitation and victimization.

Ignorance of the primary currents of our culture leaves us vulnerable to those things. Being unaware and disengaged of what is happening in any given area is a sure-fire way for those who have authority in those areas to act with impunity. An informed populace means that people can rise up and protest, shape public opinion (through free speech such as this blog), communicate with their senator, hold rallies, organize political movements, or a host of other things as a response. If we are ignorant, we don’t respond because we are, well, ignorant. We should keep in mind that an informed minority is always more powerful than an apathetic majority. For example, in the former Soviet Union, only an estimated 25% of citizens were Communist, but they controlled approximately 1/5 of the world. Informed minorities are always stronger than apathetic majorities. What is funny is that some people say “I can’t do anything, so why bother?” I say that we can do more than we think. But even if that were not true… even if we were powerless subjects being acted upon by the powers that be, at least by understanding what is going on, we can play defense and perhaps be better off than if we didn’t. Let me give an example: if I were an 85 year old man and had to face a 23 year old Mike Tyson in a boxing ring, I may not be capable of successfully fighting him; but the fact that I couldn’t win by playing offense doesn’t mean that I would lower my arms and take a merciless beating. Instead, I would at least put up my gloves and pull in my elbows and try to protect my vital organs and my face, head, and chest. Then, even if I didn’t win, I might at least survive. Similarly, when we don’t know much about our world, we are defenseless because of our indifference.

We need to be informed about the world because we are citizens in that world. This is where we live. This is where we exist. The condition of the world affects our lives. The things happening in our world affect our families. These things affect our children’s children and loved ones, friends, relatives, acquaintances and neighbors. And when I say that these things (civics, politics, economics, and so on) affect our lives, I mean that decisions made by people having authority who are not held accountable by informed, thoughtful, engaged people, affect you nearly every moment of the day. So while we live in an apathetic state being brainwashed by time-wasting novelties, decisions and actions in the stock market, bond market, futures, congress, judiciary, governmental officials and agencies creating regulations, and so on– while those things are going on, they affect everything in life. For example, gas taxes raise your gas prices; Standard & Poor’s downgrade makes loans for a car or school harder to get or to pay; new regulations on coal means higher prices for air conditioning at home; OPEC trade imbalances means it costs more for trucks to bring products to your favorite stores, raising the price of mac & cheese. Do you see what I mean? All of that to say that being uninformed doesn’t make you invulnerable to these bad things; it makes you and your family and everyone you care about more vulnerable and, yes, potential victims.

Being Uninformed Always Makes Us Gullible

The irony of being a victim, however, is that those who are both victims and who are uniformed OFTEN (almost always) blame the wrong people for their problems. Instead of kicking ourselves for being willfully ignorant – and instead of holding the right people accountable, those who actually caused the problems – our ignorance typically makes us unable to discern what actually happened. When this happens, we become gullible. That gullibility makes us vulnerable to slick slogans and simplistic explanations, where we are more likely to believe someone because they speak with passion or eloquence, and we begin to believe certain things because the person is “speaking loudly” or pounding his or her fist.

Gullible people are defenseless to these things because they lack essential knowledge and discernment. And since they don’t know the facts, they fall for rhetoric and emotion instead of believing things because they are actually true. Does that make sense?

We all have areas of ignorance; I know I do. But the key is to do something rather than nothing. My advice to those who feel unable to discern what is happening in our world and who are at a loss to understand what to do is this: