Immanuel Kant thought that, ”Taken literally, absolutely nothing worthwhile for the practical life can be made out of the doctrine of the Trinity” (The Conflict of the Faculties, 1798). I am convinced by Scripture and experience that the great German philosopher could not have been more wrong on this point. The one God who exists as three inter-loving Persons has everything to do with “the practical life.” The Trinity is a precious and practical doctrine, one that touches all of life—how we break anti-loving cycles in our hearts, how we pray, how we worship, how we do church, how we build relationships, etc.

Perhaps Kant’s assessment was informed by a failure of 18th century European churches to intentionally live out Trinitarian realities. As J. Scott Horrell laments, “We have done little to consciously express Trinitarian belief in our daily lives and in the community and mission of the church” (“An Ontology of Mission” in Global Missiology, Vol. 1 No. 6 [2008]). In other words, we need not only Trinitarian orthodoxy—correct doctrine of the Trinity—but also Trinitarian orthopraxy—correct practice that accurately reflects the reality of one God who exists as three inter-loving Persons. Jesus prayed for His church to form a kind of angled mirror, bonded together with the kind of love that directs the world’s gaze upward to behold the Triune God of love (Jn. 17:11-24). Are we reflecting the Triune God clearly, or do our churches often form more of a cracked mirror, fragmented shards with animosities and apathies caked like mud, refracting little light from above?

We could list many reasons why churches fail to clearly reflect Trinitarian reality to the world. I’d like to focus, briefly, on just one reason that is rarely considered. I am convinced that one reason we often fail to reflect the Trinity is that we often do not have a robust enough doctrine of the anti-Trinity. Before sewing a scarlet H (for "heretic") onto my tweed jacket, allow me to explain what I mean by "the anti-Trinity”:

Yet the Bible also reveals an unholy anti-Trinity—three destructive forces at work against the Triune Creator’s mission. Protestant Reformers, like Martin Luther, saw these three forces accurately as the Devil, the Flesh, and the World. I call these three “the anti-Trinity,” not because they afford us with some kind of analogy of how one God could exist as three Persons (they offer no such analogy), but because the Devil, the Flesh, and the World are set directly at odds against the redemptive mission of the Triune God. We must not downplay the reality of any of these three destructive forces as we join the Triune God’s mission.

Biblically, just who are the members of the anti-Trinity?

The Devil cannot be allegorized away as some fictional villain, like Darth Vader or the Joker. In the Bible, Satan and his legions are really there and launch daily warfare against God. Whereas the Father—the first member of the holy Trinity—is our great “Justifier,” declaring us “not guilty,” (Rom. 3:26), a God who “never lies” (Tit. 1:2) and who “gives life” (Ac. 17:25), the first member of the anti-Trinity is the great “accuser” (Lk. 22:21; Jn. 12:31), “the father of lies” who “was a murderer from the beginning” (Jn. 8:44). We must prayerfully suit up with the armor of faith, truth, and the gospel, and fight back against Satan’s power with Scripture’s power (Eph. 6:10-18). If we ignore the first member of the anti-Trinity then we live out a kind of oxymoronical “Christian naturalism,” oblivious to invisible warfare, naked on the battlefield, duped by the Devil’s great trick of convincing the world that he isn’t real.

If, however, we stop with the “father of lies” then we become a kind of inverted mirror image of the Arian who limits His concept of God only to the Father. As Arianism keeps people from engaging in worship of the Son and the Spirit as they should, so limiting our concept of evil to the Devil keeps us from engaging the Flesh and the World as we should. With such an inadequate view of the anti-Trinity, we end up with an unhealthy, superstitious fixation on the invisible world. We find Satan in every sniffle, fear demons in every dark corner, and blame Beelzebub for our own self-induced blunders. “The devil made me do it,” we may say, when in reality, “My own stupidity and addiction to the rush of sin made me do it.” We end up more preoccupied with “the father of lies” (Jn. 8:44) than focused on “the Father of Lights from whom all good things come” (Jam. 1:17).

The second unholy member of the Bible’s anti-Trinity was often referred to by Paul as “the flesh.” By “flesh” Paul did not mean our hundred-or-so pounds of carbon and H20. Rather by “the flesh” Paul referred to the sin nature, that deep drive within all of us to do things our own way, by our own power, for our own glory. It’s that force inside you like a giant invisible magnet pulling you back into those same old selfish sins. It is the force that the great Russian novelist (and notorious gambling addict), Dostoyevsky, knew so well when he observed that “in every man, a demon lies hidden.” Or as INXS sang, “Every single one of us has a devil inside.”

Narrowing our view of evil to demons out there causes us to ignore the the “demon” in here, the evil propensities within our own hearts, the fact that, in a sense, we are all “possessed” by that evil force Paul called our “flesh.” What are we to do with the second member of the anti-Trinity? Paul, again using warfare terminology, commands us to “kill” it prayerfully by the power of the Holy Spirit (Rom. 8:13). The Puritans used to call this sacred duty “mortification.” If we are not orthodox enough in our view of the anti-Trinity, if we limit our concept of evil only to the Flesh, then we may grow preoccupied with ourselves, morbidly introspective, and stray armorless into spiritual warfare against the Devil out there.

The Bible’s third member of the anti-Trinity is “the world.” The Bible does not picture the 6.6 sextillion ton sphere of heavy elements spinning around the sun as some evil force (God called that world “good” when he made it). Rather, the World as an evil entity refers more to the “spirit of the age,” the social system that hails greedy consumption, radical self-assertion, and boundless sexual exploration as seminal virtues (1 Jn. 2:16; Eph. 4:17-20; 2 Pet. 2:12-14). It is a system that measures people’s stature in terms of the cars on their driveway, the zeroes on their bank statement, and the notches on their bedpost. Friendship with this World system (again using the Bible’s warfare language) is to make ourselves “an enemy” of the God who wants so much more for His creatures (Jam. 4:4).

We are not commanded, however, to build cult compounds, stockpiled with guns behind high walls sealed off safely from this world. We are called to live in this world in a radically countercultural and redemptive way. We are to think of ourselves like Paul, as “crucified to the world” (Gal. 6:14), too dead and nailed to a cross to leap off and indulge in its falsely advertised, ultimately unsatisfying, and self-destructive pleasures. We are to be non-conformists against “the pattern on this world” (Rom. 12:2), refuting a system of self-exaltation with lives of irrefutable, self-sacrificial love.

Again, limiting our concept of evil to this member of the anti-Trinity, leaves us detrimentally imbalanced. We find ourselves on a self-righteous crusade against all the evil forces in culture, e.g., those socialist lefties out there, those God-hating pagans out there, those Christmas-banning secularists out there. We disregard the evils in here, the corruption in our own hearts. It is, after all, far easier to blame the unbelieving world than face ourselves squarely in the mirror. Is it any wonder with such an inadequate view of the anti-Trinity that the loudest spokesmen against culture’s evils are so often the same names making scandalous headlines with their own personal evils? In our battle against external evils it is all too easy to leave our internal evils unexamined and unopposed. Without a biblical awareness of the anti-Trinity, we become the very evils we are fighting.

WHICH DO YOU IGNORE?

To echo my original thesis: one reason we often fail to reflect the Trinity well is that we often do not have a robust enough doctrine of the anti-Trinity. We reduce evil to the Devil, the Flesh, OR the World, when all three are daily at war against our joy in God and the joy of the nations. Which member(s) of the anti-Trinity do you most often ignore? Where does your soul stand unguarded? Do not be intimidated, overwhelmed, or discouraged. The anti-Trinity is no match for a Triune God of love. 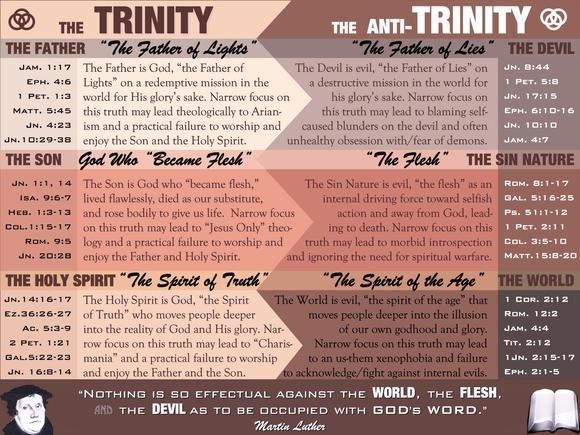