Paul is not Talking about Himself: Why I take the "pre-Christian" Reading of Romans 7:14-25 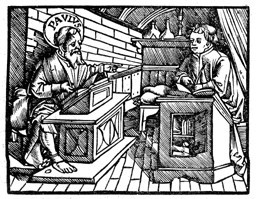 Earlier this semester, my good friend Ken Berding and I were discussing the different views on Romans 7:14-25 and decided that we would each write a blog post summarizing our reasons for holding opposing views on the passage. Last week, Ken gave a great defense of the view that Romans 7:14-25 is autobiographical and is thus about the Christian struggle with sin. I found Ken’s reasons 3, 6 and 7 very strong (Ken also gave a fine experiential discussion of that struggle in an earlier post). As Ken pointed out, there are many smart people on both sides of this issue, so this is not a “slam-dunk” interpretational problem.

Here are some of the reasons that I am in favor of option 2:

If Paul says that Christian are no longer in the flesh and are no longer slaves or prisoners of sin, then it seems to make the most sense to say that he is talking about pre-Christian experience here in Rom 7:14-25.

The picture: The Apostle Paul (dictating the book of Romans to his scribe, Tertius), in the Zurich Bible, 1536. Courtesy of the Digital Image Archive, Pitts Theology Library, Candler School of Theology, Emory University.