I recently returned from an excavation at Tel Dan in Israel. The season was for four weeks (June 25-July 20, 2012), but I only stayed for the first two. I was accompanied by Ivan Haq, an MA-OT student at Talbot/Biola. Neither of us is a professional “field” archaeologist, but we paid for our room & board and flights and we offered our labor as volunteers.

Tel Dan is one of the longest ongoing excavations in Israel. Avraham Biran began digging there in 1966. The current director is David Ilan of the Nelson Glueck School of Biblical Archaeology (under the auspices of Hebrew Union College—Jewish Institute of Religion, my alma mater). This season, there were also volunteers from Indiana Wesleyan University, Hebrew Union College (Cincinnati), and elsewhere.

Some of the well-known treasures from Tel Dan include the “House of David” inscription, the Israelite Gate complex, the Canaanite Arched gate (see picture), the “High Place” (see picture), and the springs that serve as the primary source of water for the Jordan River (see picture). 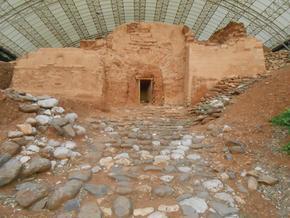 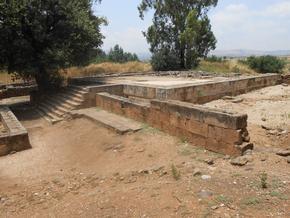 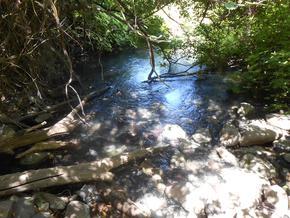 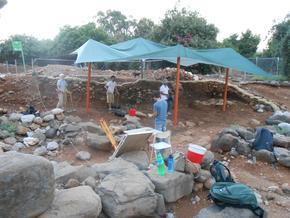 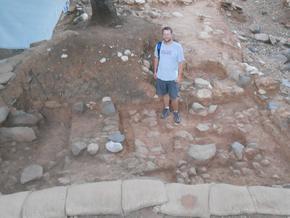 Our typical daily schedule went like this. We get up very early and leave the Mt. Hermon Field School at 5:15 AM to begin our work. We have breakfast on the tel at around 8:30 AM. We have a “fruit break” at 11:00 AM and we leave the tel at around 1:00 for lunch and rest (and showers). Around 4:30 PM we do pottery washing/reading. In the evening we have lectures, dinner, and field trips. In short, we stay very busy and I was always completely exhausted. Excavation tasks might include picking (with a large or small pick), hoeing, troweling, sweeping, moving rocks, filling sandbags, sifting soil (for small finds), filling/dumping wheelbarrows, making tags for buckets/finds, photography, and taking elevations (levels for opening, closing, special finds, etc.).

While there are many tasks on the dig, I would say that the bulk of our attention as excavators was focused on two things: identifying walls (stone and/or mudbrick) and collecting pottery. Pottery sherds are collected in every locus; then they are washed and “read” by the expert staff members. We especially look for sherds that are “diagnostic,” meaning that a rim or handle is indicative of a certain vessel style or form. Such information is used to identify sequencing in the stratigraphy and the historical period that is represented by the stratum. Besides walls and pottery, there may also be many special finds that emerge on the excavation, including objects of bone, stone, clay, metal, and wood. For example, this season volunteers found a female plaque figurine, Roman glass and coinage, and I found part of a zoomorphic (animal-shaped) vessel (see picture). 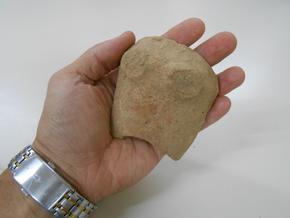 One of the things I like most about working on excavations is that I learn a great deal not only about the site itself but also about the whole region. For example, we took many field trips to local sites in the Hula Valley (Upper Galilee), including Mt. Hermon, Har Bental, Nimrod’s Castle, Druze towns, various museums, Banias Springs/River (see picture of Ivan), Gamla, “Dolmen” fields, Bethsaida, Omrit, Hazor, Sea of Galilee, etc. 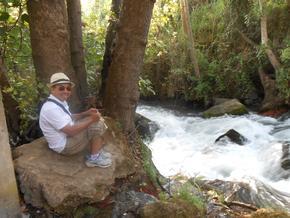 All in all, I had a wonderful experience. I wrote about sixty pages of notes in my journal, even though I had been to Israel on two previous occasions! If you haven’t gone yet, I want to encourage you to make it a priority to travel to Israel, and perhaps even to volunteer on an excavation (see my previous post, “Can You Dig It?,” at http://thegoodbookblog.com/2012/jan/25/can-you-dig-it-2012-edition/). I guarantee that it will transform your understanding of Scripture forever. So what are you waiting for?

I want to thank Talbot School of Theology (esp. Drs. Dennis Dirks, Michael Wilkins and John Hutchison) and my family (esp. the LeClercs, Lilliendahls and Koenigs) for their generous financial and logistical support on this trip.