Early last year I did a blog post by this same title, and I want to revisit the subject again. Around this time every year the excitement begins to build for archaeologists and for those who are interested in archaeology. The reason for elation is that summer plans for excavation in Israel are announced every January. This summer, there are around twenty excavations in Israel that are open for volunteer participation. Yes, that means YOU can be a part of unearthing the next great discovery in Israel!

I personally have participated as a volunteer excavator at Gath (Tell es-Safi)—one of the capitals of the Philistine Pentapolis. I worked for the whole season (four weeks) and learned a great deal in the process. While I was on site I journaled about sixty pages of notes about biblical history and religion. I was given the opportunity to unveil Philistine cultic paraphernalia (such as painted incense stands) and many small and large vessels which still contained organic remains from ninth-century BC Philistia (see photo). I was even the first to breath in “Philistine air” that was trapped for about three thousand years! Does that sound exhilarating or what? 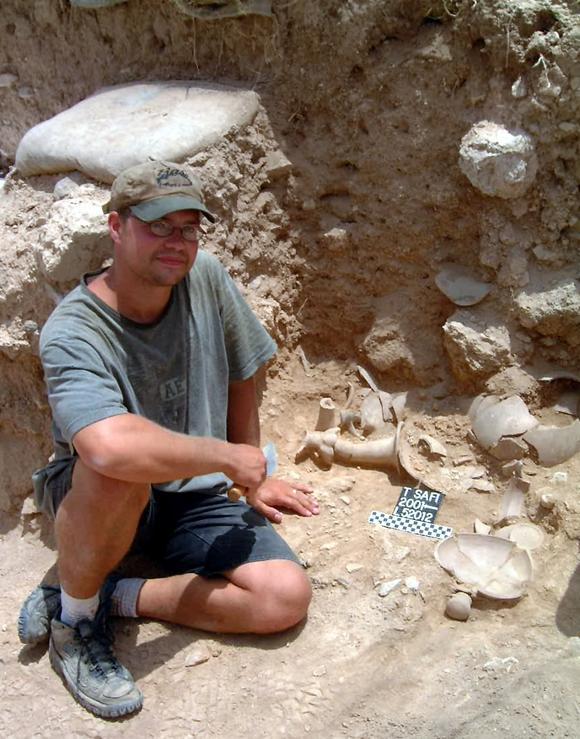 So, here’s the catch. If you volunteer on a dig in Israel these days, you actually need to pay your own way. Contrary to popular perceptions, there really is not much money in the field of archaeology. For the most part, archaeological research is driven by donations. So also, most of the grunt work on Israeli excavations is provided by inexperienced volunteers. That’s where you and I come into the picture! On average, you would probably have to pay around $500-600 per week to the institution organizing the dig and they would provide you with room and board for the duration. Of course, you would also need to secure your own flight to and from Israel. But, in my opinion, this is all a very small price to pay for an experience that will reap invaluable dividends for personal Bible study and research.

So what’s the next step? You should visit one of the lists that are available on the internet so that you can choose your site. There is a list compiled by the Biblical Archaeology Society and there is another list by the Israel Ministry of Foreign Affairs. Make your selection, then contact the appropriate person, send in your deposit, and you are Israel-bound!

This summer, some of the options include Akko, Ashkelon, Azekah, Bethsaida, Burna, Dan, Gath, Gezer (water system), Hazor, Jaffa, Jerusalem (Temple Mount sifting), Megiddo, Qeiyafa, Rehov and Tiberias. If you can’t manage to go this year, then there is always next year. Personally, I am planning dig this summer at Tel Dan—a large Israelite site located north of the Sea of Galilee. I can’t wait to go! If you’re interested, you should act quickly. Perhaps I will see you there!

Discipleship in the Time of Coronavirus

Do “Random” Mutations Occur by “Chance”?