Thinking in Circles about the Bible 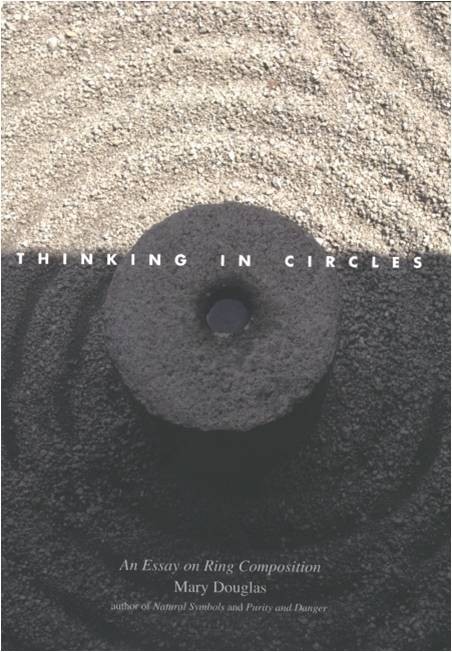 One of the best books I have read in the last couple of years is Thinking in Circles (Yale, 2007) by Mary Douglas. I highly recommend this book to anyone who is interested in hermeneutics, literary approaches to the Bible, or the cultural background of the Bible. It is a non-technical read that is filled with fresh and provocative insights, and since it is only about 150 pages, one could read it in just one or two sittings.

The author is an anthropologist who has written many seminal studies related to biblical interpretation—especially focusing on the ritual and legal genres of the Pentateuch. In Thinking in Circles, she draws on some of her previous works, including In the Wilderness (Sheffield, 1993) and Leviticus as Literature (Oxford, 1999). In all of these books she discusses aspects of “ring compositions,” which are basically complex chiasms. She explains that the primary distinction between a mere chiasm (e.g., A-B-B’-A’ or A-B-C-D-C’-B’-A’) and a ring composition is that in the latter, the central section (D) reinforces the rhetoric and themes of the outer framework (A and A’). To this primary feature Douglas adds six additional features that characterize rings (but you will have to read the book to discover the six others!).

Such ring compositions are found throughout ancient Eastern Mediterranean literature (like Homer’s Iliad) and even in “modern” compositions (like L. Sterne’s Tristram Shandy, and we can now add J. K. Rowling’s Harry Potter series!). But the student of the Bible will be delighted to discover numerous biblical examples of ring structure. Douglas explores smaller passages like the Eden narrative (Gen 2-3), the Binding of Isaac (Gen 22), the Balaam narrative (Num 22-24), and she explores longer texts—like the whole book of Numbers—at length. Indeed, her analysis of the structure of the book of Numbers is the most valuable contribution of this work, in my opinion.

Douglas’ book—which I should mention is also brilliantly crafted as a ring—has raised all kinds of prospects for me as I thumb through the books of the Old Testament. I wonder if books that have been analyzed as macro-chiasms (like Genesis, Deuteronomy, Joshua, Judges, Ruth, Kings, Esther, Job, Proverbs and Jeremiah) may actually be ring compositions upon further scrutiny. In order to test out one of these hypotheses, I have recently written a paper that argues for the whole book of Judges as a pristine example of a ring composition based on the seven characteristics delineated by Douglas. I have presented this at regional and annual meetings of the Society of Biblical Literature (2011) and I will also publish it as an article in a forthcoming festschrift (to be published by Eisenbrauns) and in a commentary on Judges (to be published by Baker).

But my ideas about the structure of Judges would not have come together without reading this short book by Mary Douglas. So I want to encourage you also to read Thinking in Circles so that you can apply ring theory to additional books and passages of the Bible. This could be the topic of your next sermon, paper, thesis, dissertation or book!

By the way, the above five paragraphs of this blog post also follow a simple chiasm (A-B-C-B’-A’). The first and fifth paragraphs mention the title, author, brevity and reading of the book. The second and fourth paragraphs talk about the relationship between chiasms and rings in the Bible. And the central paragraph highlights the single most valuable contribution of the book.