On Set During COVID-19: Cinema and Media Arts Alumna Shares Her Experience 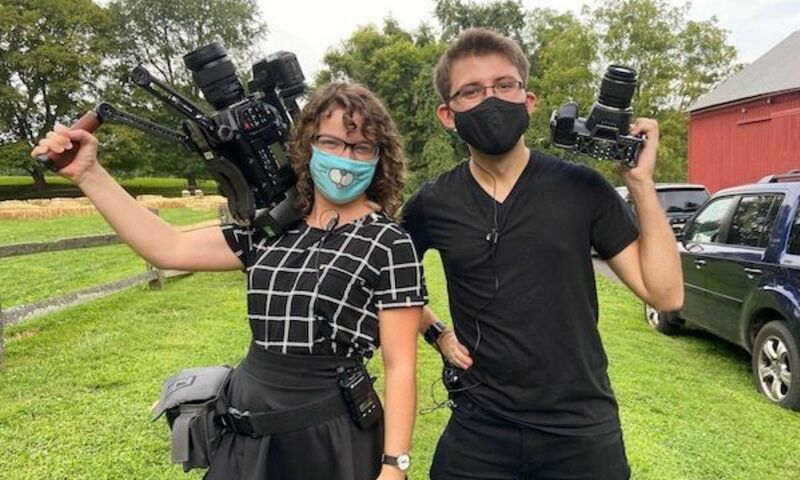 Rebecca Baliko (’20) graduated from Biola University during what is arguably the most chaotic period of the COVID-19 crisis. With less than two months before the end of the semester, Baliko had to evacuate campus and finish her degree remotely. She accepted her award for School of Cinema and Media Arts Outstanding Production Student during the school’s virtual senior chapel. Her parents watched via Zoom.

Growing up in Canada, Baliko dreamed of going to film school and pursuing a career in film. You could say that art runs in the family. Her father, Bela Baliko, is a renowned nature photographer, author and jigsaw puzzle maker. We asked Baliko to reflect on her professional journey so far.

How did you become interested in filmmaking? And why did you choose Biola?

I used to make a lot of home videos of our family’s travels and quickly realized that a simple video could help inform and encourage others by exposing them to something positive and informative. I really wanted to do that on a larger scale, so I began to pursue filmmaking as a career toward my later years in high school. Originally, I was interested in cinematography and documentary work, but I have since specialized down into First Assistant Camera (AC) work.

Although Biola was not originally on my list for film schools, several people from our home church in Orange, California strongly encouraged us to check out the campus and their CMA program (which was not yet its own school). After visiting the campus a number of times and sitting in on Professor John Schmidt’s excellent Cinematography & Editing class, I fell in love with Biola and knew it was where God wanted me to be. I could not imagine how my life would have gone if I had attended a different school — virtually all of my closest friends were my fellow students and nearly every paid film gig I have had can be traced back to a Biola connection. Those four years at Biola were an incredible adventure, and I am so thankful that God led me there to grow as both a Christian and an artist.

You were involved with some ambitious student films. Can you name a few that were particularly meaningful or formative for you?

Caesura and Silly Human definitely top the list as two of my favorite short films. “Caesura” was one of the best short films shot at Biola (it not only won Best Picture at the Guerrilla Student Film Festival, but also Best Director (Andy Brewster), Best Actor (Brendan Shannon), Best Cinematography (Tyler Skillings), among many other awards). It was directed by my friend Andy Brewster, who also worked with me on our feature-length film, Rubaru. It was actually kind of like a Rubaru reunion for us, since most of the department heads were from that indie film. My good friend, Tyler Skillings, was the Director of Photography (DP); and Andy Aragón was our gaffer (who later went on to DP the other acclaimed short, Silly Human).

Caesura had its own particular set of challenges, since the topic itself was pretty heavy, and we were shooting in a lot of different spaces. We shot all across the university campus, and even out on the desert flats for the really dramatic ending (which included burning a piano). The camera team had to roll with the punches and accommodate all of the location changes, so I kept the camera build pretty light and we all worked together to smoothly switch it from the Fisher dolly to sticks to Steadicam. The short revolves around the music world, and the set itself felt like a dance at times.

Both of those projects really demonstrate how team-oriented the industry really is. It was only a couple weeks later that Andy Aragón and I were on set together again, this time doing camera prep at Panavision for Silly Human. Silly Human was also a pretty incredible set to be a part of (and also featured one of my heavier camera builds), since most of it was shot on a 50s-style film set that the art department constructed inside the studio. It was definitely one of the most intensive shorts I've worked on, but after seeing the finished film, I think we can all say it more than paid off. I loved seeing everyone in their element. Andy killed the cinematography on that one; and he's even been acknowledged by the American Society of Cinematographers for his work on Silly Human.

You’ve been working steadily since graduating in Spring 2020 — the semester interrupted by COVID-19. Can you share a little about what it’s been like entering the industry at this point in time?

I’m sure I speak for most of my class when I say May 2020 was an incredibly discouraging time to graduate. There was basically nothing going on, production-wise, from late-March until around mid-May. Even through the summer, work as a freelance First Assistant Camera was very spotty, and there were a number of times I had no idea how I was going to be able to afford rent. With my family thousands of miles away in Canada, and nearly all of my friends gone from the area (heeding the call to return home for the “two-week lockdown”), I found myself quite alone, without work, in a strangely quiet and closed L.A. I basically had to hand everything to God and say, “If I’m meant to be down here in the film industry, you will make a way.”

As the restrictions lifted, and my friends began returning to L.A., I started to get gigs again. Andy Aragón pulled me onto a few smaller sets, and my friend Tyler Skillings got a full-time job as a DP for a company that regularly shoots Amazon ads. My AC friends that remained out-of-state were great to refer me for L.A. gigs they were unable to accept, and slowly but surely, I found myself having a more-or-less steady stream of work again.

What’s been the most important thing you’ve learned at Biola?

Kindness is never overrated, and the importance of spending quality time with people cannot be overstated. If you don’t make it a priority to make time for your family or your friends (meaning, hanging out off of the set), it becomes very easy to get overbooked with film sets, schoolwork, and side jobs when you are a CMA student. Staying up with the hustle is important, but there is also great value in quietness and stillness. Make time for rest. Do a daily devotional. Book a weekend off. Get your film friends together and go to the beach, or do something else that’s unrelated to film. Even though filmmaking is what we are most passionate about, it is not what defines who we are.

Similarly, as Paul wrote in Philippians 4:5, “Let your gentleness be known to all men.” Hollywood is an incredible place to work, but it is also an industry that tends to run off of status and superficiality. Don’t fall into that trap. Being genuine, and going against the grain by being gracious and kind, really does impact the people around you. Make it your priority to serve others, no matter what position you are on set. People will tell you it’s a cutthroat industry, but kindness and positivity really do go a long way.