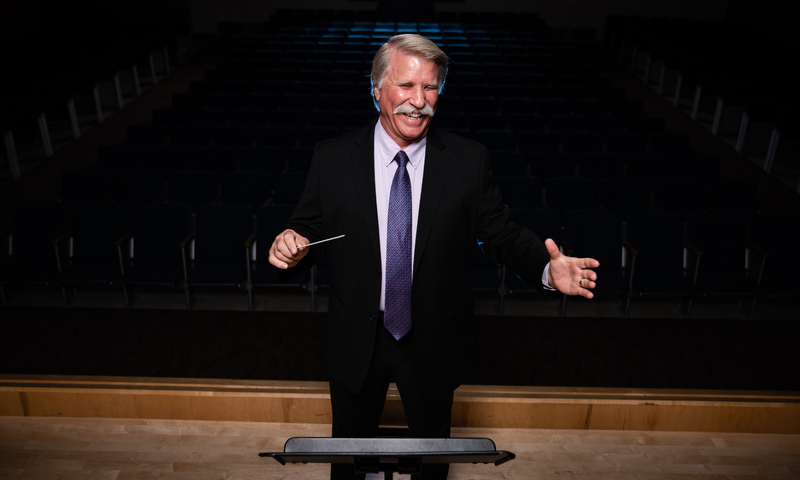 Biola University Conservatory of Music Head of Winds and Percussion Robert Feller was selected as one of six finalists for the 2020 Arlin G. Meyer Prize, which recognizes faculty members from across the nation for exemplary works of art aligned with their Christian faith. Feller was selected as a finalist for the prize based on his performance in 2018-2019 when he directed Symphonic Winds.

“Obviously, it’s quite an honor to be in a mix with such great Christian musicians,” Feller said.

Feller was among musicians and artists from other Christian institutions including Dr. Stephen Heyde of Baylor University who received the award.

“Congratulations on bringing such a high caliber of music and performance to your campus, and enriching the lives of your students and community. Your work was tremendous, and we are pleased to recognize your efforts,” said Dr. Matthew Mireles, 2020 Arlin G. Meyer Prize Coordinator.

Fine arts faculty members who teach or perform in creative writing, art, music, and film can enter, but only five are chosen as finalists. Due to COVID-19, this year’s winner will be publicly announced next year at the annual Lilly Fellows Program National Conference in October 2021 at Boston College.

Feller shared that being selected as a finalist is an opportunity that will bring attention to Biola’s Conservatory and he hopes students will be motivated by this recognition.

“So these [awards] ... keep us inspired and motivated to keep working hard, to keep pushing our students to the highest levels possible,” said Feller.

The prize honors Arlin G. Meyer, professor emeritus at Valparaiso University, who served as program director of the Lilly Fellows Program in the Humanities and Arts from its inception in 1990 until his retirement in 2002.

Apply or learn more about the Biola Conservatory of Music.