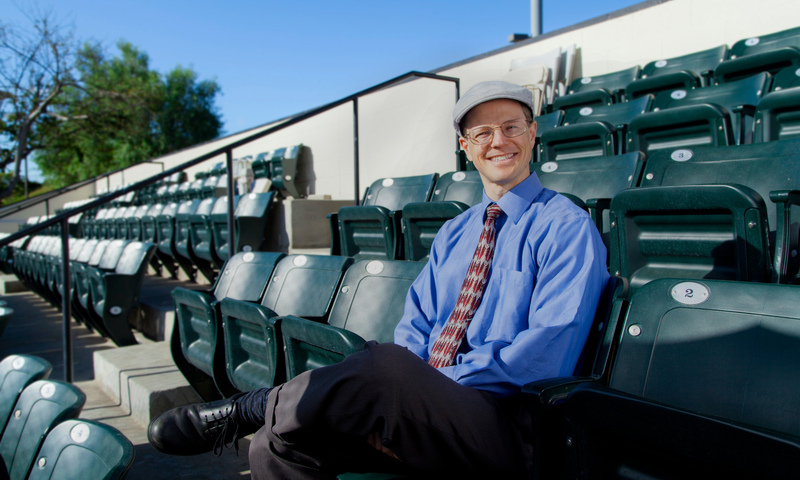 Dr. Jason Wilson, Biola University professor of statistics, helped develop a formula called Quality of Pitch (QOP) that can detect the quality of a good pitch versus a bad pitch in baseball. He used it for a new purpose this year — to discern whether or not players were cheating.

“We want to establish QOP as the MLB standard in measuring pitch quality. If we can do that, then the statistic will become widely known,” said Wilson. “No one else has been able to use pitch quantification to detect illegal sign-stealing. If we can do it reliably, then this could be the thing that elevates QOP.”

Sign-stealing is part of baseball, but the use of only players’ eyes is what makes it part of the game. Using his formula, QOP, Wilson recently released a report that determined how using technology illegally contributed to the Houston Astros hitting pitches that otherwise would be impossible for batters to predict in the 2017-2018 Major League Baseball scandal. His report was covered by the media including an article in Orange County Register: “Hoornstra: New sign-stealing report corroborates evidence against Astros, Red Sox.”

QOP utilizes technology to grade pitches, show pitcher starts, and the pitcher’s seasons stats. With last year’s investigation into a cheating scandal, Wilson decided to test his measurement and see if QOP could discern cheating.

Biola alumnus Jarvis Greiner (’12) had formulated the original QOP statistics report for a class in 2012. Current student, Brain Zarske, a mathematics major, recently wanted to test whether Houston Astros and Boston Red Sox players had been laying off high-quality pitches that other batters could not so he teamed up with Greiner.

“When we first started research for this project, we had no idea that we were going to find anything. Like any research, you run different tests and hope a result may show up. I think this is the first time we have seen hard evidence that sign-stealing changes how a player performs,” said Zarske.

Using Quality of Pitch, Wilson’s recent report corroborated reports of cheating on behalf of the Astros in the 2017 season, including during the 2017 World Series when they won the title. The report also confirms the Red Sox cheated in the 2018 season. The Red Sox won the World Series title that year.

“The first draft of our tech report was a proof-of-concept paper to see if we could retroactively detect known cases of illegal sign-stealing. And we did. The task now is revising that paper in light of peer review we received, and getting it to the right people,” said Wilson.

Six players from the Astros were sampled to determine how accurate it was for them to choose pitches that were undetectable without the aid of a camera in center field and various banging on trash cans, which the teams used to notify teammates on the field of a good pitch in order to cheat.

“[When researching] we now see that swing rate (depending on the quality of pitch) plays a big role in seeing who may or may not be stealing signs. And figuring that out is just the tip of the iceberg for tracking sign-stealing,” said Zarske.

Wilson and Zarske’s report showed the benefits that these players got from being able to detect when a high-quality pitch was being made. Those players had a higher percentage of batting averages which therefore concluded that their pitching selections were premeditated and QOP was able to accurately detect that batters from the Astros were illegally sign-stealing.

“Guessing what pitch is coming is a huge part of the game of baseball. Anyone could get a sense of that from simply playing a video game of baseball. So as we continue to dive into this research, my long term goal/dream would be to come up with a system that could predict when sign-stealing may be happening, rather than learning about it a few years after it happened,” said Zarske.

Further research continues for QOP as this brings more insight into baseball and the ability to catch cheating in action — a feat that is highly esteemed in the math, statistics, and Biola communities.

“I am grateful to God for the opportunity to do this kind of interesting and challenging work. He has given us favor for it through the protection of using our validated proprietary metric, and that path He has led us on to this point. If we did not have that, we would not be able to compete against the time and resources of our competitors who are trying to do the same things with pitch quantification,” said Wilson.