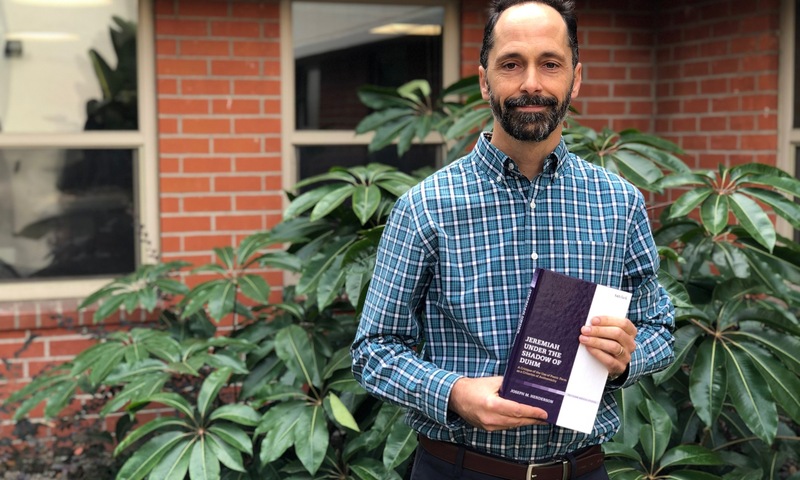 Biola University professor Joe Henderson has been studying the book of Jeremiah for more than two decades. Last month, he celebrated the culmination of over 25 years of studies in Jeremiah with the release of his new book, Jeremiah Under the Shadow of Duhm: A Critique of the Use of Poetic Form as a Criterion of Authenticity.

For Henderson, the book represents the outcome of more than two decades of thought and research which have followed him through his years in seminary and nearly twenty years as a professor at Torrey Honors College. Henderson’s fascination with the book began in a class he took at Asbury Seminary in 1993.

“I was initially drawn to the book [of Jeremiah] because I found it to be powerful literature. As an English major, I found that I could read it like I read other books,” said Henderson. “It’s very much like in Torrey, how we read books of the Bible like we read Western classics… In particular, I was intrigued by the challenge of figuring out the structure of the book and how the different parts fit together.”

Over the years, Henderson has written on various topics from the book of Jeremiah and also used it for the basis of both his master’s thesis and his doctoral dissertation. Despite his interest in the literary form of the book, much of his work is a critique of a particular compositional theory.

“I increasingly found that what was keeping scholars from appreciating the structure of the book or, its presentation of the prophet, or of God — was their commitment to a model of how the book was composed,” Henderson said. “To help Jeremiah studies move forward, I thought it would be best for me to address that obstacle so that people could have a fresh look at the book.”

The heart of this project lies in Henderson’s counterarguments against a German scholar Bernard Duhm, who wrote an influential commentary on Jeremiah in 1901.

“According to Duhm’s theory, only the poetic parts of the book are authentic,” explained Henderson.

This is a framework that Henderson finds troubling and unfounded and that he believes has consistently derailed Jeremiah studies in the century since Duhm put forth this proposal.

“The way I see it, there was a long process in the mainstream biblical scholarship of trying to make the prophet Jeremiah and his poetry conform to expectations about prophecy and poetry that come from Romanticism,” said Henderson. “I show at several points that what modern scholars are trying to do is recast Jeremiah in the mold of a Romantic poet, like Wordsworth or Blake.”

For Henderson, the solution to this interpretive assumption lies in a systematic critique of the shaky foundations of Duhm’s claims. In the book, he exposes the Romantic origins of Duhm’s framework and seeks to clear out the interpretive snares that Duhm has inadvertently laid for a century of scholarship.

“In actuality, the portrait of the prophet is right there for any reader to see,” said Henderson. “There is nothing on the face of it that makes it historically implausible. But 100 years of Jeremiah scholars have been unable to see that because before they even start looking at the book’s portrayal they are conditioned to view the different parts of it according to a model of how the book was composed.”

Henderson hopes his work will enable future scholars to focus on the more operative questions of Jeremiah scholarship without being hamstrung by unnecessary compositional obstacles. Now that the book is published, Henderson is thankful for the ways in which this 25-year project has shaped his own life and understanding of Jeremiah, and he looks forward to seeing the vital truths of the prophet rise to the surface again with the distractions of Duhm’s ideas cleared away.

Drawing on his love for J.R.R.Tolkien’s classic Lord of the Rings series, Henderson explained how he hopes his book will pave the way for other scholars to “build and plant.”

“Sometimes I think of my work as like Frodo’s quest to destroy the ring. Bernard Duhm crafted a powerful tool for interpreting Jeremiah, that like the ring, basically corrupts everybody who uses it. And so, I've thought of my mission being to take it back to Mount Doom, where it came from, and throw it into the fire. This work is mainly destructive - but the hope is that afterward, the Shire would come back to life.”

Cinema and Media Arts Alumna Launches Her Career at Disney