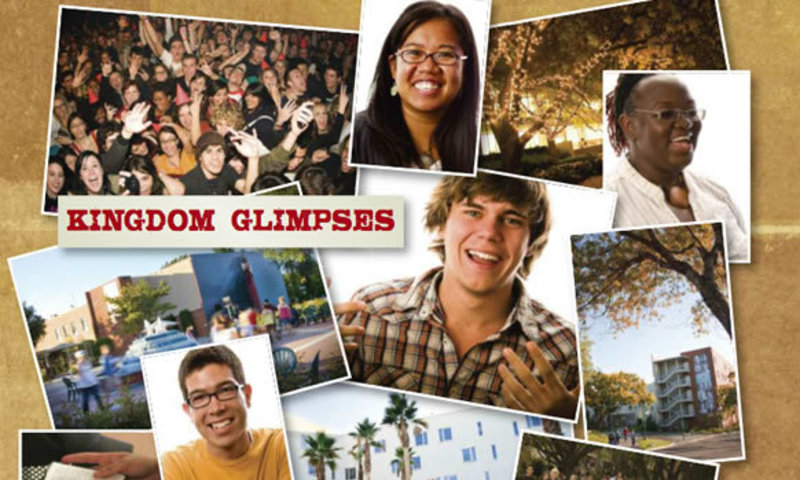 In the 2007 book, unChristian, Biola alumnus and Barna Group president David Kinnaman (’96) presents a startling array of statistics about the perceptions people have of Christianity.

One of the most significant findings of the book’s research is the report that among young outsiders, 84 percent say they personally know at least one committed Christian, yet just 15 percent think the lifestyles of those followers are significantly different from the norm.

See and hear from current Biola students in their own words.

At Biola, though, is this the case? At a time when Biola is seeing record numbers of enrolled students — students choosing to attend a university known for missions rather than binge drinking and spiritual formation rather than sexual awakening — the statistics of unChristian don’t seem totally applicable.

For several weeks this fall, Biola Magazine went to the source, interviewing students of diverse backgrounds, majors, interests and ages — both undergraduate and graduate — to take the pulse of Biola in 2009.

It’s a student body that is focused outward, actively seeking ways to make the world better and bring people to Christ, as well as inward — striving to be an authentic, transformed community of believers. They’re part of a generation of Christians that is tired of being against things and would rather live lives that are for something. They are committed to a confident faith, less embattled than empowered and motivated by building a kingdom rather than defending a fortress.

They are spiritual entrepreneurs, dreaming of ways to impact the world for Christ. This is what they’re all about.

Reaching Out to the World

Let’s be honest. Christian colleges don’t have the reputation of being particularly engaged with the outside world. Rather, we are known for being sheltered, insular and a little bit detached from reality.

The reality at Biola, though, is that the current batch of students is remarkably broad-minded and outward-focused.

Community, for them, must necessarily go beyond the sheltered world of a Christian university or well-to-do suburban congregation.

Talbot student Aaron Mascaro, who works as chaplain for Long Beach Rescue Mission, hopes to one day plant a church that is focused on leaving comfort zones to minister across cultural and socioeconomic borders.

“Unity, diversity and reconciliation are big issues for the church today,” he said. “We have to create a church that is more reflective of the gospel, of God’s kingdom.”

Coupled with this focus on diversity and cross-cultural ministry is the strikingly global mindset of many Biola students. By the time they have graduated, many of them will have traveled internationally. Record numbers of students are participating in study abroad programs, and many of them express interest in living abroad permanently after graduation.

This international orientation makes sense in a world that is increasingly “flat” and globalized, and it’s a trend that goes beyond Biola.

Still, many Biola students are finding that their desire for cross-cultural experiences fits well with a more robust, kingdom-minded faith. Senior anthropology major Caitlin Risser speaks for a lot of students when she says that an openness to study and visit foreign cultures offers us a chance to “see who God is through all sorts of different lenses.”

Caitlin thinks it is important that we think of the Great Commission in the context of globalization — accepting new ideas while still holding strong to our core biblical values.

“Tolerance is both positive and negative,” she contends. “We should accept cultures for how beautiful God made them, but we should not accept the sins within them.”

Students like Charlotte Evensen are clear that creating an accepting, tolerant community is not about saying yes to every lifestyle as much as recognizing the basic humanity in people.

Indeed, a mindfulness of humanity and our call to love and care for people is something more and more students are committed to.

Students like sophomore Rachel Aspinwall and senior Danika Dahlin exemplify the heart many students have for humanitarian work and social justice.

A missionary kid from Thailand, Aspinwall volunteered in three AIDS orphanages during high school and hopes to use her nursing degree from Biola to return there one day. Dahlin has worked for the past few summers in Malawi for her parents’ nonprofit, Water Wells for Africa, and has been involved in the Darfur Awareness Club on campus. She’s been overwhelmed by the sheer enormity of the problems that need solving in the world, and believes that “social justice” causes are not sustainable unless people come at them with a faith in God.

She’s just one of an increasing number of students who are reaching out to the world not because they think they can change it, but because they know God can. He, and he alone, changes things.

Opening Up to One Another

Students’ renewed fervor for impacting the wider world, however, begins with a desire to effect change on a smaller scale—in their own lives, in their own community. Building God’s kingdom, after all, must begin by laying down a solid foundation, by establishing the core values that inform everything else that we do.

The “solid foundation” for this generation, it seems, is authenticity. For these young people, who grew up in a world of marketing and hypocrisy from every direction (the media, their families, teachers, politicians, preachers, etc.), there is a profound desire for something real.

At Biola, this desire parlays into a commitment to openness and honesty — to God, to each other, and to oneself. Increasingly for Biola students, the facade of perfection is something they want to do away with.

Junior Josh Penman is one student who is tired of hiding his faults. He’s a passionate activist involved in social justice causes like ending sex trafficking, but he readily admits that his more righteous ambitions have sometimes been sidelined by his personal struggle with pornography.

Josh is an example of a trend toward honesty about sin among Biola students. They want to confess sin to each other rather than letting it fester and deter them from their higher priorities.

Central to this is a commitment to community, which is another big emphasis of Biola students today.

If we are to cultivate a “kingdom culture,” where God’s priorities supersede our individual cultural norms and values, we must begin by forging real, authentic relationships with one another, Phil said.

Whether through increased participation in small groups, prayer ministries or informal discipleship communities in dorm lounges, students at Biola are seeking each other out and putting the community — the body of Christ — in a higher place of prominence.

Transformation, From the Inside Out

Certainly, transformation is the crux of the matter — the tie that binds the inward and outward focus of the Christian experience. And it’s crucial in the lives of Biolans today.

Community is hugely important for them, but many students are recognizing that “being real” is ultimately just one part of “being transformed.”

“Beyond being authentic, we have to get better,” said Christine Jensen. “It’s about truth and being in a relationship where you can speak into each other’s lives, have the risky conversations and maybe even hurt each other a little along the way. The kingdom dynamic is transformation.”

Indeed, the power of transformation is the key to understanding what makes Biola students stand out from the unChristian model. The first thing these students will tell you about their transformation is that it is not about them; it’s not a result of anything they’ve done. It’s about God seeking them out, pulling them unto himself.

“Christ not only offers salvation from the corrupt world, but begs you to grasp hold of that salvation,” said Josh Penman. “As one who sees you suffering as a result of your own actions, he calls for you to take his hand and let him pull you out.”

Christ is in the business of pulling people out, which is something Aaron Mascaro can testify to. He grew up in a Pittsburg home surrounded by drug use, divorce, sexual immorality and other dysfunction, and couldn’t find any hope or security there. But when he accepted Christ, “it was like night and day.”

For others, like senior Stetson Butler, it hasn’t been like night and day, but it’s been no less sweet. For the past several years, Stetson has felt God transforming him spiritually, teaching him to feel pleasure not in the things of the world but in the company of God’s people.

“It’s such a beautiful picture, looking back on it now,” Stetson said. “It wasn’t any of my own doing. It was just the Spirit working in me and transforming my heart. I really began to find pleasure in following Christ, which is not something I could have done on my own.”

Stetson is graduating from Biola this December, and — like many of his cohorts — he’s not quite sure what he’s going to do. But this is not a fear as much as it is a thrill. He has the confidence of a man who’s been grabbed hold of, but the humility of one who knows he can never wield salvation like a weapon.

Rather, he will venture forth into the world unafraid — a spiritual entrepreneur building up the kingdom with bridges rather than battlements, with an ear to the ground and an eye to the heavens … and hands in the dirt.

Brett McCracken is a writer and journalist based in Southern California. He is the senior editor for The Gospel Coalition, and author of Hipster Christianity: When Church & Cool Collide (Baker, 2010), Gray Matters: Navigating the Space Between Legalism & Liberty (Baker, 2013) and his most recent book Uncomfortable (Crossway, 2017). He has written for Huffington Post, CNN.com, The Princeton Theological Review, Mediascape, Books & Culture, Christianity Today, Relevant, IMAGE Journal, Converge, Mere Orthodoxy and Q Ideas.