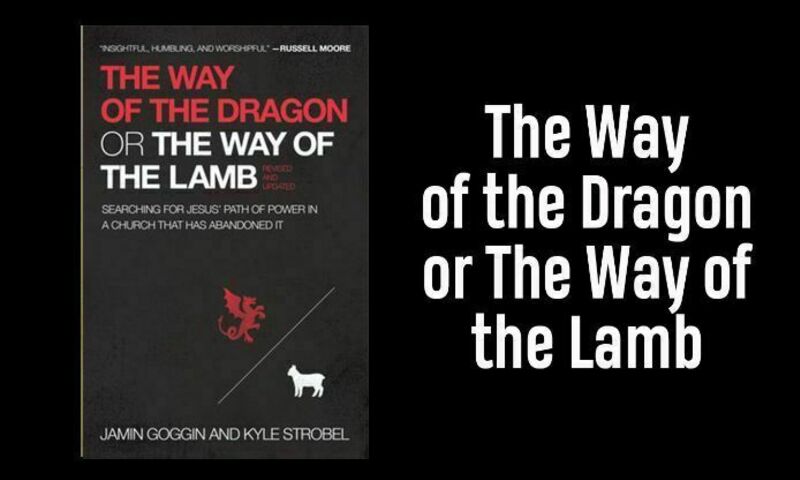 This guest post is by J. D. Greear, the pastor of The Summit Church in Raleigh-Durham, NC, and former president of the Southern Baptist Convention. Greear posts about leading his church staff through the question of power and weakness by reading “The Way of the Dragon or the Way of the Lamb” by Jamin Goggin and Talbot School of Theology professor Kyle Strobel, whose second edition has just been released.

“So I exhort the elders among you, as a fellow elder and a witness of the sufferings of Christ, as well as a partaker in the glory that is going to be revealed: shepherd the flock of God that is among you, exercising oversight, not under compulsion, but willingly, as God would have you; not for shameful gain, but eagerly; not domineering over those in your charge, but being examples to the flock. And when the chief Shepherd appears, you will receive the unfading crown of glory.” — 1 Peter 5:1-4 ESV

Recently our staff team read through a challenging and prophetic book — The Way of the Dragon or the Way of the Lamb. The authors, Jamin Goggin and Kyle Strobel talk about a dangerous trend in churches like ours — a trend toward focusing less on the humility, weakness and servanthood of sacrifice, instead prioritizing the triumph, power and boasting of success. They say, “With the decreasing emphasis on the pastor-shepherd, we have seen the rise of the leader. … We are often looking more for a dragon than a lamb. These pastors are much like the shepherds in Ezekiel 34, who were fixated on feeding themselves and disinterested in actually feeding the flock” (pp. 117-119).

In contrast to the self-interested shepherds of Ezekiel 14, Goggin and Strobel point to Peter’s epistle. The word Peter uses for those of us in ministry is partaker (1 Peter 5:1). As they write, “We are invited to partake in [Jesus’] way. We become shepherds who serve in hiddenness and are surprised when recognition comes. We become shepherds who are committed to being personal and present” (121).

The danger here, as the authors remind us, isn’t power itself. Jesus spoke and healed and lived with incredible power, and he invites us into that same life. But the way Jesus used power was diametrically opposed to the way we inherently use it. Jesus’ approach to power, the “way of the lamb,” uses power for love. It is the power that doesn’t come from talent or visibility. It is a power, ironically, found in weakness through faith.

As more prominent Christian leaders fall, the more Goggin and Strobel’s warning seems incredibly timely. So I tried to distill their advice into “8 warning signs” that well-intentioned ministers may be leaving the way of the lamb and following the way of the dragon:

1. Jealousy Toward the Success of Others

Here’s Goggin and Strobel again: “I have seen my thirst for power driving my ministry. I have viewed other pastors as competition and the church as a means of self-glory. I have acted in ways that place me alongside the powermongers I so readily critiqued” (5).

I have seen this in my own life, and it’s never been pretty. Early in my ministry, I was praying for miraculous revival in Durham, where our church is. The Holy Spirit impressed upon me this thought: “What if I bring the revival you are asking for … but do it through another church?” I knew the right answer. I should have said, “Yes, Lord! You must increase and I must decrease!” But the impulsive answer that bubbled up from my heart was much less flattering.

2. Dissatisfaction in How Little You Have Accomplished

“Success,” Goggin and Strobel write, “is not determined by what I accomplish, but rather by my faithfulness — faithfulness to the One who called me and to his gracious invitation” (107). I am no longer a man in my 30s, but I remember the anxiety and comparison that filled that decade. Everyone else seemed to be accomplishing more, and I had nothing to show for my efforts.

Or so I was tempted to think. The more we find ourselves frustrated at our lack of “accomplishments,” the less we will compassionately focus on the ministry God has put right in front of us. Fruitfulness matters, but the only road there is through consistent faithfulness.

3. Resentment at Not Being Recognized

If we are partakers with Christ in his ministry, we should expect most of our service to be done in secret, often overlooked and rarely praised. The shepherd, after all, is more concerned with caring for his sheep than for his reputation among the other shepherds. If others praise you for your service, accept it with humility. But you can’t be in this for the recognition. You’ve got to be in this because you want to serve God and his people.

4. Inattention to “Small Things” (Because You Are Focused on “Big Things”)

Goggin and Strobel write, “The word that came to Jeremiah was, ‘Do not seek great things for thyself.’ … We should just get out of the business of seeking great things. Now, if we do that, then we will be more observant of the small things. … We will begin to care about the people around us. They are the neighbors God told us to love. You can’t do that if you are in a hurry [to accomplish great things]” (P. 132).

This is probably my greatest temptation in ministry. I am always eager to rush ahead, trying to get to the “next thing.” That impatience might look impressive to others (and it may feel great when I’m “accomplishing” things), but it leaves hurting people by the wayside.

Now, a brief caveat. Be a necessity, someone has to be focused on the big picture. There will be lead pastors and organizational CEOs and seminary presidents. And we need those people. But there is a world of difference between rushing to those positions because they are “big” and occupying those positions with a spirit of foot-washing.

5. Distance from People in the Flock

If you are no longer in the ministry out of love for people, you’ve left the lamb and embraced the dragon. That doesn’t mean every minute of your work week has to be face-to-face with people. Our tendency, though, is to remove ourselves, incrementally, from difficult situations and difficult people. But a shepherd that doesn’t smell a little stinky — like his sheep — isn’t doing his job.

If you have a talent for leading large, do it well to the glory of God. Your leadership is a way to serve. But never, never, never lose your connection to people. If even the earliest apostles were bringing meals to widows (cf. Acts 6), then it is certainly not above you to be in the nitty-gritty of people’s lives.

“We get frustrated” as Goggin and Strobel write, “because God did not make others as I would have made them. [But] God did not give them to me so that I could dominate and control them, but so that I might find the Creator by means of them. Now other people, in the freedom with which they were created, become an occasion for me to rejoice, whereas before they were only a nuisance and trouble for me. God does not want me to mold others into the image that seems good to me, that is, into my own image.”

Rather than seeing people as created by God, to be loved as such — and placed into my life to sanctify me! — we tend to see them only as tools to benefit our mission.

This reminds me of the story of Shimei (2 Samuel 16:5-13). Shimei was an enemy of King David, and while David was on the run, Shimei took the opportunity to publicly shame him and curse him. David’s gung-ho military man, Abishai, wanted to stop Shimei’s tongue by removing his head. But David told him to refrain. Perhaps, David said, even this cursing fool has a word for the Lord for me. If there are Shimei’s in my life, I want to hear the correction God may have even through them.

The power of the dragon cannot thrive in an environment of honesty and vulnerability. This is why the pull of isolation is one of the clearest signs that your life has become all about you. As Proverbs says, “A fool takes no pleasure in understanding, but only in expressing his opinion” (Proverbs 18:2). Powerful fools today may have many people in their lives, but they don’t have peer relationships with those who can oppose them, correct them, or question them.

Listen, the people in my life who know me best are the least impressed with my accomplishments. They love me deeply, but they also know my mess. That’s incredibly healthy. Are there people in your life who aren’t so impressed with your “success” that they can be completely candid with you?

8. Inattention to Developing Other Leaders

Our attitude toward power should always be, “I will serve in this role until someone better comes along.” Always.

Don’t get caught up asking, in fear, “What will happen to me if I raise up this other leader?” After all, people don’t usually look to those who empower new leaders and think, “Well, that person is dispensable.” Empowering others isn’t self-sabotage; it’s wise.

But we shouldn’t just pour into others because it impresses other people. God forbid. We should develop others for their own sake. Are there two or three people in your life that you’re pouring into, hoping that they will one day excel, replace or surpass you?

For a free downloadable study guide, and to find links to buy The Way of the Dragon or the Way of the Lamb, visit: WayOfTheDragonBook.com