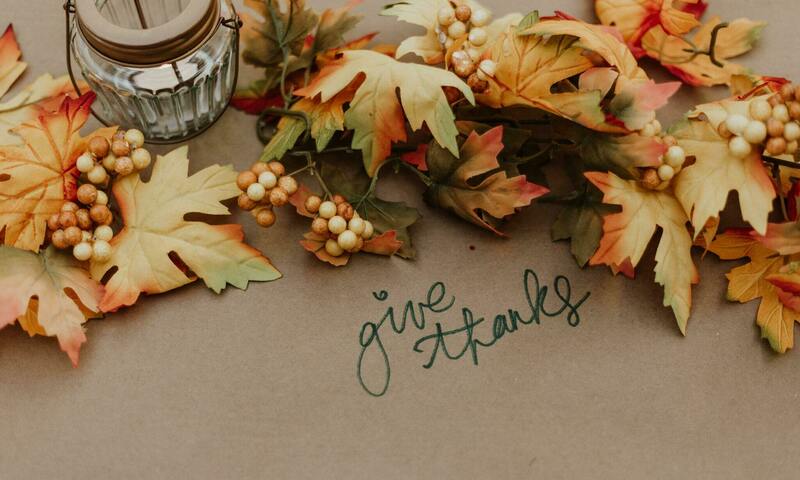 Thanksgiving in the United States is one of my favorite holidays. I used to view it as the only holiday still untainted by secularism and materialism. But that was before football took over.

Now, for many of us, largely because of the national obsession with American-style football, the most thanks that gets expressed on our day of thanksgiving is a brief prayer offered before we inhale a magnificent spread of turkey and stuffing (brief, so people can get back to watching the game!). Of course, there is a type of thanksgiving expressed—loudly and with whoops of joy—when a favorite football team wins a game, though such thanksgiving is not (usually) expressed to God. Ironically, our exuberant thankfulness at our favorite sports team’s success may be closer to the level of exuberance expressed by the Apostle Paul (in places like Ephesians 1) than are the words of thanks many of us utter during our pre-turkey prayer.

But thanksgiving in Christ is way more than a short thanking of God for a meal or a favorite team’s victory. Thanksgiving in the letters of Paul is one way of describing the entire Christian life. This is not an exaggeration. One simple way to describe the Christian life is this: God showed us grace, and our response to that grace should be a life lived out of gratitude. Paul put it like this: “And whatever you do, in word or deed, do everything in the name of the Lord Jesus, giving thanks to God the Father through him” (Col 3:17). This gratitude-in-all-of-life impacts numerous aspects of Christian living.

The manner in which we serve illustrates the point well. Christian service isn’t simply making a decision to serve, and then “gritting out” our service. We perform acts of service in conscious awareness of the lavish grace we have received from God! God looked upon us, criminals (“sinners”) that we were, and chose to send Jesus to die in our place. As a response, we sacrificially serve others because we have received unbounded grace.

The sinful woman who poured expensive ointment on Jesus’s feet and wiped his feet with her hair illustrates the relationship between thankfulness and service. When Simon the Pharisee complained (in his own head) that Jesus shouldn’t have allowed a sinful woman to touch him, Jesus challenged those thoughts with: “he who is forgiven little, loves little” (Luke 7:47). But the woman at Jesus’s feet knew how much she had been forgiven, then allowed that grace to move her heart toward thankfulness, and the result was an extravagant act of service to Jesus.

Did you know that Abraham Lincoln issued his two famous Thanksgiving proclamations (proclamations 106 and 118) in 1863 and 1864 respectively—before the end of the American Civil War? Lincoln recognized that thanksgiving should not only be expressed when things were bright, but was vital during dark and dangerous days as well. Paul said that we should “give thanks in all circumstances; for this is the will of God in Christ Jesus for you” (1 Thess 5:18). We need to live all of life with an attitude of thanksgiving for God’s grace to us in Christ Jesus whether life is relatively easy or desperately hard.

The Christian life is, quite simply, a life filled with thankfulness for what God has done in Christ.

This post is an adaptation of “Thankfulness in Christ,” chapter 54 of How to Live an ‘In Christ’ Life: 100 Devotional Readings on Union with Christ (Christian Focus, 2020).