When Pursuing a Ph.D., "Discipline and Diligence Are the Main Things"

Christian Megapolis is conducting a project, which considers the following two issues: (1) the nature of doctoral education and (2) actual national Ukrainian doctors and doctoral students as living, interesting personalities. To this end we invite you to enjoy this interview of Eduard Borysov by Rostislav Tkachenko. 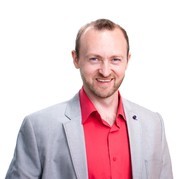 Eduard Borysov is a doctor of theology (Ph.D. in Divinity), a specialist in the field of New Testament biblical studies and patristics, the On-Site Director of the Kyiv Extension of Talbot School of Theology and Chief Editor of the new Russian-language periodical, "The Evangelical Theological Journal" (the first issue is currently being prepared for publication). He earned a B.Th. from Kyiv Theological Seminary (Evangelical Baptist Union of Ukraine), a Th.M. from Evangelical Theological Faculty in Leuven, Belgium, and a Ph.D. from Aberdeen University, Great Britain. Eduard is member of Hope Church in Kyiv.

Eduard, you graduated from a doctoral program in New Testament biblical studies. We sincerely congratulate you! Tell us, why did you decide to continue your education at the doctoral level? And why did you choose your particular program of study at a British university?

My decision to continue my education after M.A. studies was determined by several factors. First was the desire for personal development, for the expansion of my horizons and as a kind of test to determine what I am capable of. Second was the need of the Talbot School of Theology-Kyiv Extension (TST-KE) and Kyiv Theological Seminary (KTS), for both of which I worked, in raising the qualifications of their staff and teachers. Although in Ukraine there is no serious competition in obtaining a teaching post for people with a doctoral degree, this reality awaits us in the future, I hope. Third was the interest of my friends in America, who prompted me to think in the direction of further education and assured me of financial support.

When I began to research doctoral programs in the USA, I noticed that, unlike the British programs, they consist of two stages: first - the passage of a series of courses, which ends with "general" comprehensive examinations, second - directed research and writing of a dissertation. For me, the first stage seemed an unreasonable burden, so I aimed for the British system of education, in which the doctoral student works on her thesis from the first year of study. After the first year of study, the student passes an examination, which is designed to determine both her potential as a student and possible problems in her dissertation plan.

When choosing a university, I focused most on finding a professor whom I considered to be a potential project manager. Turning to a number of specialists in the field of the New Testament, I received a positive response from only one: Dr. Andrew Clark, lecturer at the University of Aberdeen.

What is unique about the doctoral system of education in the UK, in general, and in Aberdeen, Scotland, in particular?

In the UK, doctoral students are mainly engaged in independent research under the supervision of an advisor, with whom they must meet at least once a month to discuss progress and/or challenges. In addition, once a week or every other week, each department conducts seminars in its field. For example, in the New Testament department, one semester's seminars feature papers delivered by local or visiting teachers, another semester's seminars feature papers prepared by the doctoral students themselves.

What were your expectations of doctoral studies before your education began? To what degree were these expectations justified?

To be honest, I expected to work more closely with my supervisor. I thought I would receive specific answers and direct instructions about which books to read and which theologians to include in my discussion. But the essence of the Ph.D. is that the student must learn for herself how to determine the main thing, how to make decisions and to bear responsibility for her research. On the one hand, it was frustrating. On the other, it developed my own sense of intuition and responsibility, which my manager referred to as "ownership."

What was the focus of your doctoral research? Why did you decide to work in this direction?

Initially, my plan was to study the New Perspective on Paul, promoted by James D.G. Dunn, N.T. Wright and others. I wanted to compare Paul's soteriology from the New Perspective with Eastern Orthodox soteriology. But during the course of my studies the plan changed so that I devoted only the first chapter to the New Perspective. In the remaining chapters I discuss the nuances of the patristic understanding of theosis, i.e., deification, the attitude of reformers Luther and Calvin to theosis, the modern interpretation of theosis by John Zizioulas, as well as contemporary attempts by Protestant authors to interpret Paul's doctrine of the salvation in light of the concept of theosis. For many years I had been interested in questions of patristics and Pauline theology, therefore, in my thesis, I wanted to combine both of these interests.

How has doctoral studies changed your life, your views and your practices?

I think when a person encounters an abundance of different, and sometimes contradictory views, he becomes either a fundamentalist or a person more tolerant of alternative positions. I belong to the second category. This does not mean that I have compromised my theological convictions. I just do not react sharply to new and alternative positions, at least not before I study them. In Aberdeen, I attended a Presbyterian community in which sound, biblical sermons were preached, although I did not agree with some of its practices, such as pedobaptism. In other words, I learned to be more tolerant of Christians with various views.

Who are you now after completing the doctoral program? What does it mean for you to be called a "doctor"?

My great blessing and advantage over most of my fellow students in Aberdeen was a clear understanding of where I would work after the completion of the studies. I had an agreement with the leadership of the KTS and the TST-KE that I would return to Kyiv to continue my work in the seminary. Few graduates from America and Europe have an idea of where they will apply their knowledge. The American and European "market" for teachers is oversaturated by doctors. At the same time, I feel that the Ph.D. degree for me is a big advance. This is a loud title that for many others means that I am an expert in the Bible, theology, Christian ethics, practice and so on. In fact, I am afraid of the responsibility that this title imposes. Having only investigated one sphere of theology, I've come to learn how much I do not yet know. This instills a sense of humility.

What advice can you give to people who are thinking about or just starting out in doctoral studies?

In making a decision to study in a doctoral program, you need to take into account many factors. I would highlight the following: (1) Marital status: It was easier for me as a bachelor to concentrate on studying, although a family has its advantages. (2) Financial condition: Without external financial assistance obtaining a doctoral degree is an unthinkable burden and luxury. (3) Intellectual challenge: There can be periods of loneliness, doubt about the appropriateness of your chosen topic and, in general, questioning the decision to study. These must all be faced and overcome fairly regularly. (4) Spiritual aspect: Most likely, active participation in church ministry will have to be postponed. Also, the balance between considering the Bible as God's Word to me rather than a mere subject of exegetical analysis must be constantly remembered.

If you have already decided upon an area of research, the topic and even a specific plan, you need to be prepared that much can change. I would recommend not looking for a school or a program, but for a teacher who specializes in your research topic and who is ready to work with you. And then it makes sense to apply to the school where this professor works. If possible, study languages: not only the biblical languages, but also German, and in some cases, French. And most importantly: discipline and diligence. I do not consider myself an erudite person, but in my case these two qualities helped me attain my goal.

Note: This interview was originally published on October 27, 2017, on the Christian Megapolis website. Permission was granted to republish the material on the Good Book Blog by Eduard Borysov, Rostislav Tkachenko and the editorial team of Christian Megapolis.