Workbooks in the History of Redemption: An Interview with Kenneth Berding

A creative series of workbooks for classrooms and churches has recently been released: Workbook in Romans; Arranged According to the History of Redemption. Following is an interview with the series editor and author of the first workbook, Kenneth Berding. 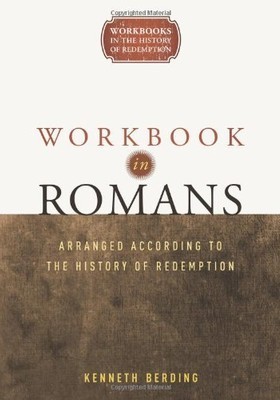 You claim that this series and the first workbook in the series (on Paul’s letter to the Romans) is unique. What’s so different about this series of workbooks?

This series of workbooks is a new and creative way of drawing out the back story that lies behind the writings of the Bible.

What is a “back story”? Dictionary.com defines it as “a narrative providing a history or background context, especially for a character or situation in a literary work, film, or dramatic series.”

The back story of the Bible, however, is far more important than that of any book, film, or drama ever written. The supporting “story” that lies behind every book in the Bible is the history of redemption—God’s unfolding purposes, plans, and processes in redeeming and restoring a world in desperate need of salvation.

These workbooks provide an entryway that will allow you to start uncovering this story for yourself. The authors of the Bible are so full of God’s story of redemption that they cannot help but sometimes “leak” it out in their writings. Other times the biblical authors directly and intentionally point their readers to the big story. Either way, it allows you as a serious reader of the Bible the opportunity to tap into that story—the most important story ever written—and so, if you will, to find your own story by bringing it into submission to God’s grand story of redemption.

Did you always understand that there was a “back story” to the books of the Bible?

I know that early in my own journey into the Scriptures, I read the Book of all books as a random and disconnected collection of verses. Those verses were helpful, inspiring—even sometimes convicting—but on their own they didn’t seem to take me into the fuller understanding of God’s plans and purposes that I longed to know. But the more I came to see the connections between various parts of the Bible, and the gravitational pull of those parts toward the person and work of Jesus Christ, my own reading of the Scriptures moved to a deeper and much more satisfying level. Moving from a verse-centered reading of the Bible to a redemptive historical reading is like walking away from your two-dimensional (flat) screen TV into a three dimensional drama where Christ is center-stage and you are personally being invited to join the story.

The first volume in this series, Workbook in Romans: Arranged According to the History of Redemption, is a study of Paul’s letter to the Christians in Rome. But Romans is a letter, not a story. Why should we be concerned about the story behind a letter?

The most important story behind a letter is the reason the letter gets written in the first place. For example, a letter to a newspaper editor is written in response to a provocative article. A business letter is written to develop a business partnership, avoid a tax difficulty, or complain about a flaw in a product. A love letter is written because someone cares deeply for someone else.

Although the immediate reason for writing a letter is the most important story for understanding it, a deeper story needs to be understood about Romans. This is the story of what God is doing in history. Simply stated, Paul believed that there was one grand story that all followers of Christ should already know—the story of God reconciling the world through Jesus Christ. But how do we know that that is the deeper story for Paul? We know about it because Paul keeps connecting to it in his letters, and especially in his letter to the Romans.

In recent years, biblical scholars and theologians have been talking a lot about the storyline upon which a particular New Testament Gospel (like Matthew), apocalypse (like Revelation), or letter (like Romans) is built. In other words, New Testament authors assume that the grand story of what God is doing in history supports what they were writing. Students of the Bible are beginning to recognize how useful it is to become familiar with that underlying story.

A story behind a letter? Can you give me a bit more evidence?

One quick way to become convinced of how important the grand storyline is for Paul is to make a list of how many persons in the history of Israel that he mentions in Romans! In this letter alone, Paul mentions Adam, Abraham, Sarah, Isaac, Rebekah, Esau, Jacob, Benjamin, Moses, Pharaoh, Jesse, David, Elijah, Hosea, and Isaiah by name. Why would he make such a list of characters if he wasn’t seeking to make explicit connections with the history of Israel in order to communicate to his readers what he wants them to know and believe?

How is Workbook in Romans arranged?

As the subtitle suggests, it is Arranged According to the History of Redemption. So rather than moving through Romans verse by verse like most Bible study workbooks, this workbook is organized by the parts of the story that make up the big story. Here are the chapter divisions:

The workbook moves along with questions (like you would often be asked in a workbook created for a men’s or women’s Bible study), but with a different goal than most workbooks. The main goal is to help you see the overall story of redemption that underlies and supports the book of Romans.

Toward the end of the workbook, I take the questions that Paul asks in Romans (Paul asks lots of questions in Romans) and reframe some of them for personal application.

Who are these workbooks for?

Workbooks in the History of Redemption are designed to be used either in a church context or in a classroom setting. Workbook in Romans can be used by groups or by individuals desiring a fuller understanding of the Bible. The studies are not difficult, but they will make you think. They do not require that you possess much previous knowledge about the Bible, but they will help move you from where you presently are in your appreciation of the Bible into a deeper place in your understanding of God’s Word.

What other workbooks are in the pipeline?

If we wanted to get a copy of the workbook, where should we go?

You can purchase the Workbook on Romans through many online sites and some bookstores. The workbook is printed and distributed by a new publishing house, Weaver Book Company, and was acquired by the highly regarded book acquisitions editor, Jim Weaver. Here is a link to the website of Weaver Book Company if you would like information directly from the source.

Thanks for the interview!