Lessons from the Foundry

"Nor do I doubt that whoever considers this art well will fail to recognize a certain brutishness in it, for the founder is always like a chimney sweep, covered with charcoal and distasteful sooty smoke, his clothing dusty and half burned by the fire, his hands and face all plastered with soft muddy earth. To this is added the fact that for this work a violent and continuous straining of all a man's strength is required, which brings great harm to his body and holds many definite dangers to his life." (Vannoccio Biringucci, De La Pirotechnia, "The Bronze Founder," Venice, 1540)

"But as for you, the Lord took you and brought you out of the iron-smelting furnace, out of Egypt, to be the people of his inheritance." (Deut. 4:20) 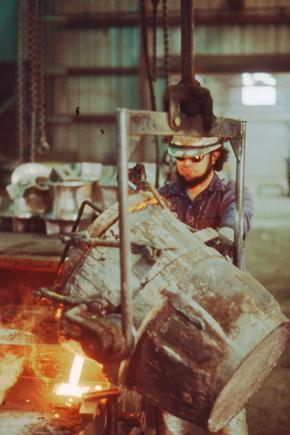 My family’s business, in the modest Colorado town where I grew up, was a foundry. For the uninitiated, a foundry is like a steel mill. Its basic operation is to melt ore (in our case, iron, brass, and aluminum) in a furnace, pour it into molds, and thereby produce metal castings. Our family joke was that my parents were “in the iron and steel business” – my mom would iron while my dad would steal. (I’ll spare you the rest of the foundry jokes.) Foundry work is hard, hot, dirty, and notoriously dangerous. Our furnace room temperature was 140 degrees fahrenheit.

From an early age I was doing weekend odd jobs in the foundry, while my friends were playing (but I’m not bitter . . .). During high school, college and beyond, often full-time, I worked as a regular laborer in the plant. I learned a lot while working in the foundry. I learned to work hard. I learned to show up and do a job well, even if it’s the last place on earth I want to be. I learned – quickly – that foundry work wasn’t something I wanted to do for the rest of my life. And in the foundry I came to understand, vividly, the common biblical image of the furnace.

Our foundry’s signature products were iron pump impellers, the core components of large irrigation pumps. Impellers enable the pumps to push high quantities of water out through irrigation systems. If you’ve seen a farmer’s massive irrigation sprinklers spray streams of water in circles hundreds of feet in diameter, you can imagine how much pressure the guts of those pumps must withstand. For those castings to do their job, the metal must be pure, free from impurity. Otherwise they will crack and break under the pressure. The iron must be purified. 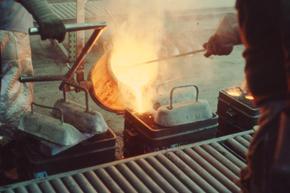 The process of purifying iron is smelting. It’s pretty simple: you heat the ore to a temperature of over 2,000 degrees fahrenheit, where it becomes a bright red-orange (“red hot”), molten liquid. At that temperature, impurities in the ore rise to the surface. These impurities, called “slag,” are skimmed off the top and thrown aside – worthless, useless, and destined to be buried. Anything short of heating the iron to this temperature will not bring the slag to the top; the impurities will remain hidden, only to become evident when the casting breaks down under pressure.

The image of a smelting furnace is common in Scripture, especially to describe times of suffering. In Deuteronomy 4, Moses is giving final instructions to God’s people, preparing to do what God has called them to do: to inhabit the Promised Land and display to the nations what true humanity under God is meant to be. In fulfilling this calling, they will face many tests and experience tremendous pressure. Will they pass the tests? Can they withstand the pressure?

Moses reminds the people that God has in fact been preparing them for just these challenges in the world, foundry style: “But as for you, the Lord took you and brought you out of the iron-smelting furnace, out of Egypt, to be the people of his inheritance” (Deuteronomy 4:20). In the suffering of slavery, God was smelting his people, purifying them to become the kind of people who could do what he had called them to do.

We don’t know all God’s reasons for allowing suffering. In particular, we don’t know all his specific purposes for Israel’s suffering in Egypt. But we do see an important one here: in the very best sense, God was in the iron and steel business. God wasn’t absent during those 400-plus years in Egypt. He was hard at work, isolating and removing their fatal impurities in the only way that can be done – with heat, by smelting.

Their suffering was not pointless or random. Whatever other factors may be involved in the causal picture as a whole, God’s intention for his people through this experience was their purity – “to be,” Moses says, “the people of his inheritance.” To be like God, holy (Leviticus 19:2), so as to represent him in the world as a “holy nation” (Exod. 19:6), to act like God in the world, doing the good works which God prepared in advance for them to do (Eph. 2:10). 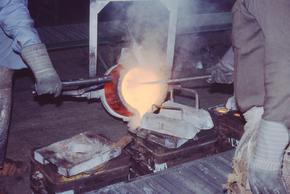 God is still in the iron and steel business. He still purifies his people through suffering. The heat he applies is an expression of his love. He loves us too much to leave us as we are. He has called us each to play a unique role in his kingdom work, and he is about making us able to do what he has called us to do.

Working in the foundry helps me understand, and so to trust him in the heat.