Doing the Right Thing: An Interview With Scott Rae 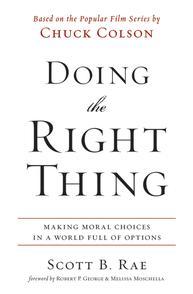 Scott Rae, professor of Philosophy of Religion and Ethics at Talbot, just released the new book, Doing the Right Thing: Making Moral Choices in a World Full of Options. He kindly took some time to answer a few questions about the book.

How would you briefly summarize your new book, Doing the Right Thing? What areas of ethics and morality are discussed in the book?

Doing the Right Thing (out in November) is a companion book to the film series by the same title that Chuck Colson produced (co-written with Princeton Professor Robert George) and hosted by long time newsman Brit Hume. The book follows the film series in its six sessions--so the first three chapters take up how we should think about morality (How did we get into this ethical mess? Is there a Moral Law? and If We Know What is Right, Can we Do it?) and the final three the application to medicine, the marketplace and the world of public life.

Who is your target audience and how will they benefit from reading the book?

The primary audience is the thinking person who cares about the subject of morality. It appeals to both Christians and the culture at large, students and people in the church. It is ideal to read the book in conjunction with seeing the film series.

What led you to write the book? How does this book relate to your previous scholarship? And how does it intersect with your classroom teaching at Talbot?

I was asked to write the book by the Colson Center and Zondervan. Colson intended to write the book himself but died before he could even start it. I was involved in two of sessions in the film series as a panelist and was a part of the "road show" to publicize the film series--we put on 1/2 day conferences in major cities around the country. I was involved in six of those conferences. In addition, I had written several books on ethics that Zondervan had published and the Colson Center and Zondervan agreed that I would be a good fit for the book. I was deeply honored and humbled to be writing a book that Colson had intended to write and tried to make it a work of which Chuck would have been proud.

What do you see as the most important ethical questions in our culture today? What about the next 20 years?

The most important ethical questions are the ones that are addressed in the final 3 chapters--matters of life and death (bioethics), ethical questions about life in the marketplace (business ethics) and questions about the ethics in government and public life. More specifically, issues about what constitutes a human person/who is included in the human community are central to bioethics. Further, business ethics issues are key since they deal with the virtues necessary for the marketplace to flourish.

Can consensus be achieved on moral truth without belief in God or some other transcendent authority? In other words, can an ethical society exist even as it embraces secularism and pluralism?

I do believe that there is a moral law that can be known and that it is realistic for people to do that moral law without having to specifically believe in God. However, it is impossible in my view to adequately ground a moral law without theism, but that is a different question than whether or not someone can be good without God (though clearly not good enough to merit salvation). The grounding for the moral law is the more important question.

One of the prevailing "ethics" of today is tolerance. The idea seems to be that as long as one's behavior isn't harming anyone, it is OK and cannot be judged in any sort of moral sense. What is wrong with this approach and what are the implications of a "tolerance"-centric approach to ethics?

I find that some of the strongest advocates of "tolerance" are sometimes very intolerant of those who disagree with them! Usually people give up their relativism (which is the moral theory that undergirds most views of tolerance) when they are the victim of injustice or have their rights violated. At that point they usually become very principled in their view of morality and sometimes rigidly so.

How the Miracles Of Jesus Compare with other “Miracle-Workers”