Commentary Review: The Letter of James (NICNT) by Scot McKnight

After thirty-five years of service, James Adamson’s NICNT commentary on the Epistle of James has received a much-needed update by Scot McKnight. McKnight’s contribution to the series significantly expands on its predecessor volume—being more than twice its size—which is due, in part, to the mounting scholarship on James appearing since its 1976 publication date. 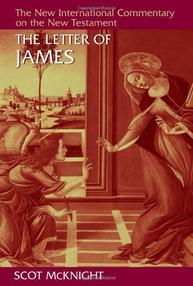 While maintaining a more implicit conversation with current scholarship, McKnight intentionally speaks to pastors, preachers, and teachers producing “an ecclesial commentary that attempts to expound the meaning of the text” (p. xi, emphasis original). The result is a pastorally sensitive reading of James that is as profitable as it is accessible.

Commentaries are not often enjoyable reading; however, McKnight has managed to produce a readable, even lively, yet substantive treatment of James. His commentary treats James holistically, often reminding readers of the larger connections between sections in the text, while at the same time offering deeper exegetical forays into the language and syntax of the letter in rather well developed footnotes. As anyone who has worked with James in the last few decades will appreciate, he thoughtfully acknowledges the contribution and untimely death of Don Verseput—the scholar originally assigned the revision of this commentary.

After a concise and useful bibliography, McKnight sets out his reading of James in an introductory chapter (pp. 1-55). In addition to surveying the traditional issues of historical context and structure, he offers a theological context within which to read the letter. Generally, both ecclesial (Luther) and scholarly (Martin Dibelius) studies have minimized (or dismissed) James’ contribution to Christian theology. However, using the category of narrative analysis, McKnight skillfully reads the letter within the historically and theologically rich story of God’s work culminating in Jesus the Messiah. Within this story, “his letter summons the twelve tribes to live out the Mosaic Torah as God’s enduring will. But even here … James reads and renders the Torah in the way Jesus taught it, namely through the combination of loving God (1:12) and loving others (1:25; 2:8-11)” (pp. 5-6). The sections “James in the Story” (pp. 4-13) and “James, Brother of Jesus, and Theology” (pp. 34-38) are a breath of fresh air in the stuffy room of historical criticism’s judgment that James has no theology—this delightful breeze continues throughout the commentary. One of the most important “story” connections for McKnight centers on the “Torah observance” of the author. For McKnight, James’ “ethic is Torah observance through the lens of Jesus for a messianic community” (p. 44). Thus, rather than “perfection” (John H. Elliott, Douglas Moo) or “friendship of God” (L. T. Johnson), it is “Torah observance in a messianic key” that constitutes the ethical center of the letter (p. 47).

Along with consistently reading James within the framework of “story,” McKnight also reads James with an eye to structure. After considering James as a “paraenetic encyclical” (p. 13, with Richard Bauckham), he focuses on the structure and rhetoric of the text rather than arguing for a specific genre within which to interpret the text (p. 48). This position surfaces most clearly in McKnight’s understanding of how James 1 functions within the whole letter. Some have argued that the first chapter is a loosely connected series of proverb-like sayings that functions as an introduction to themes expanded in the rest of the letter (Bauckham, Johnson, L. L. Cheung). However, McKnight argues that it “is not a collection of disconnected ideas but a focused address about how to live under economic oppression.” He concludes, “[i]t might be wiser to think that James has one major concern on his mind that emerges regardless of the topics he discusses” (p. 133). As with Peter Davids, McKnight has admirably attempted to demonstrate the thematic connections running through James 1; however, as with many such attempts some texts must be pressed hard to fit (e.g., his treatment of 1:17).

The major theme uniting not only James 1, but connecting much of McKnight’s exposition, is the economic oppression and exploitation of the impoverished messianic community. Rather than general “trials” (1:2), he argues, “that James has socio-economic suffering in mind when he thinks of the social situation of the messianic Jewish community” (p. 76). When James speaks of trials again (1:12-18), McKnight contends that James “has never left the topic of being tested by economic stress…” (p. 105). Whereas L. T. Johnson has argued that identifying the social situation in James is notoriously difficult, McKnight disagrees: “it is hard to think that either James or his readers would be dabbling in general moral considerations when their survival was at stake” (p. 110). Though others also detect such a social context behind James (e.g., Robert Wall), this reconstruction seems forced especially in understanding the gift from above (1:17) as “economic gifts…from Diaspora Christians for the poor saints in Jerusalem…” (p. 126).

Though opting for a maximal historical/social reconstruction, McKinght both acknowledges its limitations and refuses to allow it to force its way into every interpretive decision. The strengths of McKinght’s reading of James clearly outweigh any weaknesses and his work will be of great use to preachers and teachers of the text. It is sure to repay the careful and attentive reader with wise and practical insights into this often neglected letter.

Ten Uses of the Bible: Part 2

Thoughts on a New Book on Christian-Muslim Relations, “Vulnerable Love”