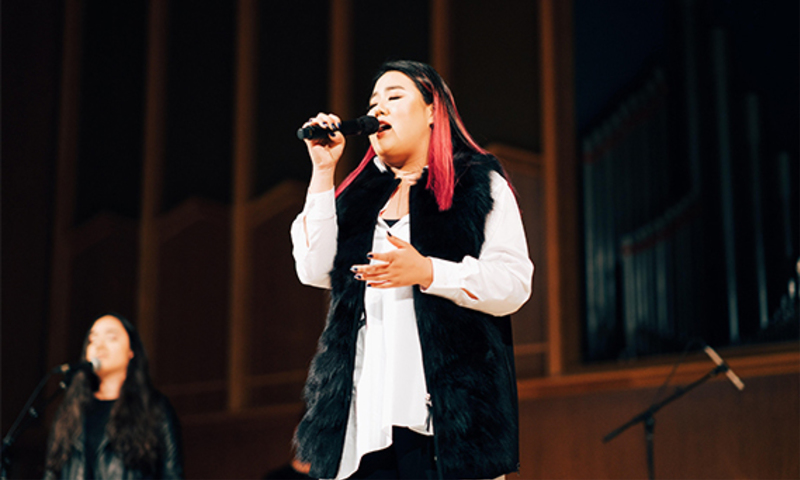 Alumna Judy Kim (’18) has been involved in music in some capacity from a young age. She started by learning piano and violin in kindergarten and added guitar in third grade, but her primary instrument now is voice.

As a young child, she always loved to sing but did not do so outside her bedroom or the shower. During her senior year of high school, she began to get serious about music and started moving toward it as a career path.

Though her family isn’t musical, they have always supported her in her musical pursuits. She recalls her dad telling her to “do something that makes you forget that time exists.” That something for Kim is music. As she approached the end of her high school career, Kim had to decide not only where to continue her education, but what to study. Biola became a top choice because she knew that’s where she would find a high quality, faith-based education.

“One thing that drew me to Biola was that I was able to incorporate my education with my faith,” said Kim. “Having gone to public schools my entire life, I was eager to finally feel safe in voicing my thoughts and opinions, coming from a Christian perspective, without any judgment or shame.”

Kim decided to become a music in worship major and was privileged to lead the Biola community in worship during chapels throughout her time as a student. She also became involved in the newly launched commercial music program as a vocalist in several pop ensembles. The classes she took allowed her to hone in her craft.

“My favorite classes were the sight singing and dictation classes,” recalled Kim. “I actually felt like a musician whenever we were reading or transcribing musical excerpts. In that class, I was given an opportunity to apply what I learned from my music theory class.”

The Conservatory of Music’s faculty have also played a significant role in her growth as a musician.

“One of my favorite professors is Dr. Jeff Askew. He always believed in me when I didn’t, and pushed me to do things outside of my comfort zone to make me better,” said Kim. “He also clearly understands that life can throw curve balls at you, and you need to do whatever you can to overcome it. Therefore, he was always incredibly supportive of all of the students whenever we were going through rough patches.”

Kim has also had several opportunities to sing off campus at other venues and even in the recording studio. One such experience was singing background vocals on worship artist Jadon Lavik’s latest songs. She and a few other Biola vocalists had the privilege of going to his studio to record his latest album.

As Kim looks forward to life after graduation, she is excited about all the possibilities and can’t wait to see where God leads her. She is considering attending Biola’s Talbot School of Theology at some point, but one thing is for sure, she will continue to sing and lead the people of God in worship.

“I’m not sure what else I would do besides leading worship and singing. I believe that God created me specifically for this kind of ministry, and I want to be obedient and steward my gifts to my fullest ability,” said Kim.

For more information about the Worship Arts program, visit the Conservatory of Music website.