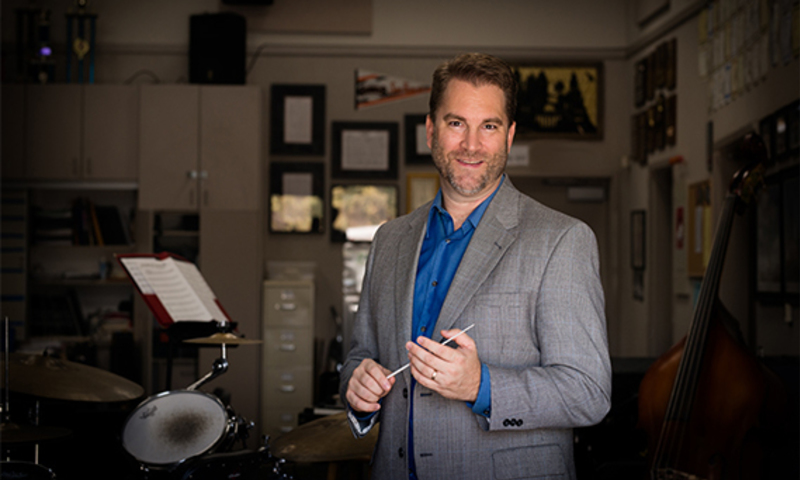 For more than 20 years, Mitch Bahr (’96) has been impacting students through music in the classroom. His passion for students and music motivated his efforts to rebuild a music program, which led to the state recognizing him in 2016 when he was named one of five California Teachers of the Year.

Bahr first became interested in music as a career in junior high school. Inspired by his band teacher, Robert Smith, Bahr decided that one day, he wanted to impact students through music in the same way he was influenced as a young man.

Bahr’s journey to Biola began because his girlfriend, Carmen, was attending Biola. He was attending community college in Northern California and looking to transfer.

“I auditioned at Westmont, [Azusa Pacific University] and Biola,” Bahr said. “After meeting Bob Feller and sitting in with the Symphonic Winds, I had no doubt where I wanted to be. Twenty-two years of marriage later, I’m sure glad I followed Carmen Bahr down to Biola!”

As a brass player, Bahr performed in many Conservatory ensembles and worked hard to be part of some of the more competitive groups, like the brass quintet, led by Associate Professor of Music Composition and Theory Robert Denham.

“I wanted to be around him [Denham] as much as possible,” said Bahr. “Not only was he such a wonderful musician, he was just the glue that made our ensembles so much fun during the mid-90s. So, when the trombone position opened up in the brass quintet, I worked my tail off to audition for the position. Brass quintet helped me fend off any feeling of vulnerability as an artist … there’s no hiding in a small ensemble. You are forced to come face-to-face with musicality with every note you play and every decision you make.”

After graduating with a Bachelor of Music in Music Education, Bahr taught at Rancho-Starbuck Intermediate School in Whittier. He taught there for five years before moving back to Northern California to teach at Foothill High School in Palo Cedro. He has taught there for 16 years and currently teaches five instrumental ensembles: two jazz bands, two concert bands and a string orchestra, as well as many smaller ensembles including drumline, jazz combo and trombone quartet.

“Biola prepared me for this job by putting me through the rigor of [many different ensembles],” Bahr said. “Being able to balance six performing ensembles with all the additional workload of a music education major forced organization skills out of me,whether I liked it or not! I learned quickly that my life didn’t have time for procrastination.”

When Bahr started teaching at Foothill, he had to do some pretty extensive program rebuilding, but his love for the students combined with a great deal of hard work have made the program a place where students learn and love music.

“Established in 1991, the school went through eight directors in eleven years before I arrived in 2002,” Bahr said. “Looking back, the biggest hurdle I had to jump was teaching the students that they mattered. Shoved into the corner as social outcasts, the band had previously faced things being thrown at them in performances, actual fist-fights in the band room with one another, and a revolving door of teachers who were either unwilling or unable to guide the program to a place of health. Suffice it to say that I love a challenge, and I relish the opportunity to teach and invest in students, one kid at a time.”

Bahr’s passion of investing in students has enabled him to build a successful music program at Foothill and empower many students throughout the state of California.