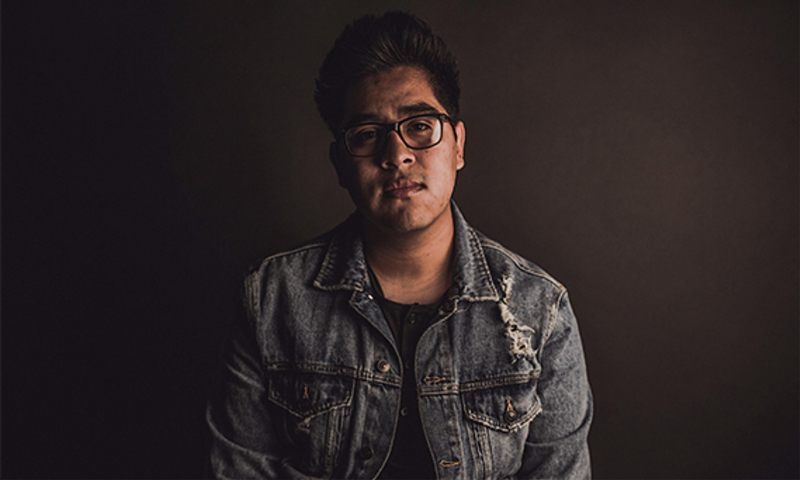 It’s not typical for college students to produce their own music in a professional studio, but for music major with a concentration in commercial music, senior Angel Ramirez, Jr., it was a reality. He produced his own single, “Back to Earth” with Adam Watts, a songwriter, producer and mixing engineer, who is one of the Conservatory’s newest adjunct faculty members.

“For us to go in the studio, knock out all the tracks in one or two takes, and finish the whole song in one day was unbelievable,” said Ramirez. “One of the best days of my life. The 15-year-old inside of me was freaking out ’cause I was finally doing what I’ve been dreaming of — with a professional, at a legit studio, instead of my closet studio. Bringing Adam Watts to the program was one of the best moves for songwriters in the Conservatory.”

Ramirez started at Biola as a music in worship major before the commercial music concentration was an option, but has always been interested in being a recording artist. When the commercial music concentration launched in 2017, he was eager to switch. As a transfer student, Ramirez considered Biola, Azusa Pacific University and Berklee College of Music as potential places to finish his degree. Biola was his top pick, but he wanted to pursue a commercial music degree program, which wasn’t offered at Biola when he transferred.

“I’ve always loved Biola but they didn’t have commercial music at the time,” recalled Ramirez. “I auditioned just because there was a rumor that they were going to add commercial music to Biola. Dr. Jeff Askew confirmed it, and I couldn’t believe that right when I wanted to transfer, the major I wanted to study in all the other colleges, opened up at Biola. I’ve loved Biola because every time I would step foot onto Biola, I could literally feel the presence of God. I would look left and right and students would be praying for each other or reading the Bible and I was also drawn to the real relationships you can have with your professors. I came from a community college where your professors barely knew who you were.”

Ramirez has enjoyed being a part of the new and rapidly growing program and paving a path for the students who will come after him in the program.

“I’ve enjoyed that we [the first crop of commercial music students] are being listened to as students to help shape what this program will be for years to come,” said Ramirez.

After graduation, Ramirez is looking forward to being an artist — writing, singing and producing music. He knows that his time at Biola’s Conservatory is preparing him to meet this goal and looks forward to all that God will lead him to do after he graduates.

“Although many people don’t really go to school to be an artist, I love music and I love guitar,” said Ramirez. “I’m able to be confident in my own instrument and communicate with other musicians in the studio by saying specifically what I want in a song because I’ve learned all the terminology. I don’t rely on other people when it comes to my music and am able to trust my own musical skills that I have been equipped with through the Conservatory.”

For more information about the Bachelor of Arts degree, Commercial Music emphasis, visit the Conservatory of Music website.