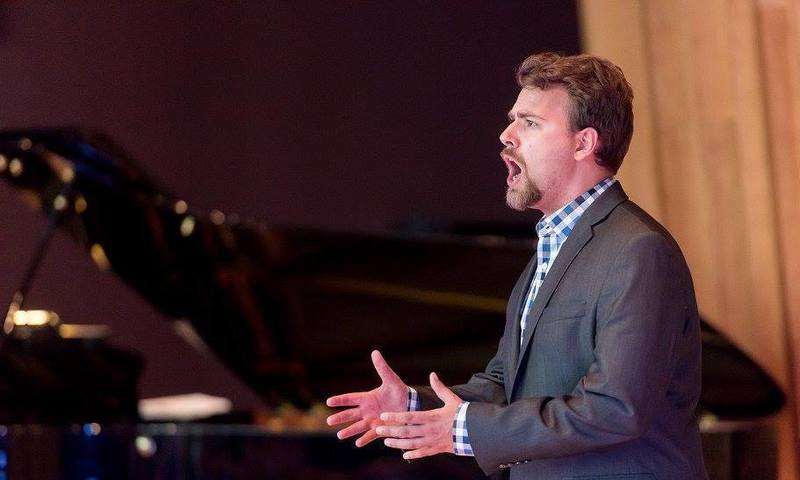 According to the National Institute of Mental Health, 16.2 million adults in the United States (6.9 percent of the population) suffer from major depression. Despite its ranking as the most common mental disorder in the U.S., depression continues to be a stigmatized topic. Balzun presented this recital in an effort to encourage conversations about mental illness, specifically depression.

Diagnosed with depression in 2012, presenting this recital was especially meaningful for Balzun.

“In 2017 I was met with a nearly year-long depressive episode,” Balzun explained in his personal letter in the program. “I was caught off guard as I was trying to negotiate what seemed like a war between my chemically-imbalanced brain and my soul which felt like it was being torn in two. I felt shame, intense anger, guilt over my inability to do my job and a thick brain fog which left me unable to do even the simplest of things, or do these simple things at an exceedingly lethargic pace.”

The first half of the recital consisted of music written during later depressive episodes in the lives of Robert Schumann, Pyotr Ilyich Tchaikovsky and Edward Elgar. The second half of the program consisted of pieces with poetry written by poets who suffered from depression. Charles Baudelaire’s collection “Quatre sonnets de Les Fleurs du mal” was performed alongside Richard Beale’s poetry which was featured in David Maslanka’s song cycle “Black Dog Songs.”

“Black Dog Songs,” the cycle which inspired this recital, vulnerably exposes the deep, raw reality of living with depression. Its namesake is from Sir Winston Churchill, who referred to depression as “The Black Dog.” The first piece, “When my father’s sperm…,” begins with an ominous, repetitive chord. Inheriting his father’s depressive gene, the speaker tells of the instinct to blame his parents, rather than accepting the disease as his own. “I am smeared with the tar of night” describes the depression as a thick, black tar that covers the speaker and keeps him from experiencing love. The next four songs of the cycle expose other characteristics of the speaker’s depression: acceptance of death, contemplation of Paradise, desire for love and encounter with manic episodes.

“On the subway platform” is the final song in the cycle. The speaker begins committed to jumping onto the tracks, but instead gets on the train. His antidepressant has failed to keep his mind at bay and he struggles against the desire to end the smothering darkness in which he feels trapped. At last, he feels release as he experiences the beauty of frost in the morning and the clear blue sky. He smells the leaves and smiles at the newness of it all. As he prays for the “newness to endure with the sun on [his] back and release in [his] heart,” the forbidding opening chord returns, foreshadowing the return of his depression.

Balzun closed the recital by singing “With So Little To Be Sure Of” from Stephen Sondheim’s “Anyone Can Whistle.” Its sweeping melodies complemented the preceding sets’ emotional struggle. Though depression is an awful and dark reality that many people live with, this piece reminded the audience of the beauty and awe of this life.

“Crazy business this is, this life we live in--

Can’t complain about the time we’re given--

With so little to be sure of in this world,

We have this moment!

Balzun expanded on his rationale for the recital program.

“I've always come back to this idea that we as Christian artists, are supposed to seek Truth (with a capital "T") in everything we sing,” reflected Balzun. “In this program, the Truth is that depression is an unfortunate part of the world that we live in, but we don't know how to talk about it because we refuse to talk about it. We openly talk about physical ailments, but if someone tries to talk about mental illness, people shy away from the topic and quickly try to change course or otherwise end the conversation by way of ‘quick fixes’ like ‘Cheer up!’ or ‘You can choose to not be depressed.’ I'm choosing to say something about my experience with mental illness for the sake of starting conversations, and as part of my way of ending this unfortunate and misplaced stigma.”

For more information about the voice department and to view the concert schedule visit the Conservatory’s website.