The award was presented at Biola’s 92nd Missions Conference 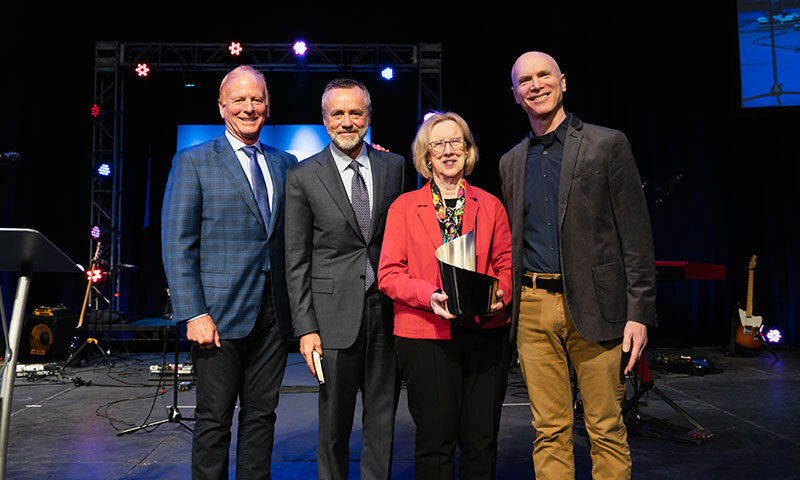 Biola President Dr. Barry H. Corey presented the award, which is awarded to people who are committed to advancing Christ’s kingdom through evangelism, discipleship and Christian worldview training and those who defend religious freedom and advocate for the weak and defenseless.

“Luis Palau was a remarkable evangelist, a powerful speaker, teacher and author who impacted billions of people for the Lord Jesus Christ,” said Corey. “Paired with his courageous and obedient service to the Lord right up until his passing, he embodies what Biola's Charles W. Colson Award represents. We are honored to celebrate him posthumously and present this award to his family, fittingly at Biola's 92nd Missions Conference.”

Palau reached hundreds of millions of people for Christ throughout his lifetime. He was born in a small town just outside of Buenos Aires, Argentina in 1934. By the age of 12, Palau accepted Christ into his life and shortly thereafter began sharing the gospel with people both in person and through his radio broadcast. Palau’s voice was heard in great numbers throughout his life as he spoke at numerous conferences, rallies and campaigns.

“I would have gladly had a business or been a lawyer, either one,” Palau said in an interview released by K-Love radio after his passing. “The real commitment of my life was to win people to Jesus Christ. There is nothing greater in the world.”

Palau’s commitment and calling on his life was to reach people and introduce them to Jesus. Palau held rallies in a variety of locations, including communist countries such as the Soviet Union (1989) and Beijing, China (2004). He held 500 campaigns and festivals in more than 80 nations, partnered with tens of thousands of churches, and spoke to 140,000 people at Portland’s waterfront park (2000).

Palau’s legacy has impacted the hearts of millions and the Luis Palau Association continues to carry the Christian faith to all nations, led by his two sons, Kevin and Andrew. In his book, My Life in Seven Words, he shared seven words (Delight, Surrender, Burn, Focus, Serve, Unite and Proclaim) that changed his life, his family’s life and now, through his work, the lives of many.

The 2022 Charles W. Colson Conviction and Courage Award honors Palau’s commitment to and passion for spreading the gospel to many ears in many nations.