Biola Alumna Honored as Woman of the Year 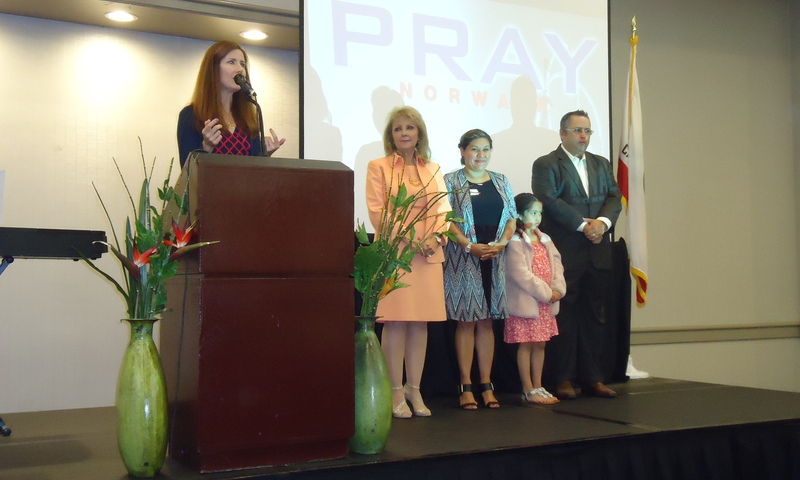 Devoted teacher and Biola University alumna April Reutter was recognized by the 57th California Assembly District as Woman of the Year this March. Her efforts as an educator as well as her community service work, primarily in Norwalk, have earned her respect and acclaim among her colleagues and the community members she serves. While currently postponed, Reutter and several others will be recognized at a ceremony in honor of Women’s History Month, which takes place in March.

“Receiving an award like this was not on my radar,” Reutter said. “I feel extremely honored and humbled to receive recognition from governmental leadership, when my pursuit was the transformation of Norwalk. I've loved sharing the testimonies of what God has done through the years as I've built relationships with city leaders, pastors, teachers and city organizations.”

After receiving her degree in liberal arts at Biola’s School of Education in 1993, Reutter became a teacher, focusing mainly on 1st through 4th grades. She has been teaching in the Norwalk/La Mirada Unified School District for over 25 years and is involved with many different co-curricular activities and serves on many different administrative committees. She also participated in the district’s teacher exchange program, representing Norwalk and La Mirada abroad in Isehara, Japan. Reutter was honored by her colleagues as Teacher of the Year in 2015.

Reutter has also served extensively in the mission field with many different nonprofits. In 2006, she lived in Sagona, Kenya and taught at Shepherd’s Home for Girls while doing research on the AIDS crisis. She taught English in Kaposvar, Hungary with Operation Mobilization, served in Chiang Rai, Thailand with Youth With A Mission, and travelled to Belmopan, Belize with Mission Builders. Since 2018, she has served on the board of directors for local nonprofit Door of Hope in Norwalk.

In keeping with her passion for education and other cultures, Reutter earned her master’s degree in cross-cultural studies with a focus on children at risk from Fuller Theological Seminary in 2007. She has been a speaker at several events, such as the Spirituality, Justice and Education conference at Biola University, Biola’s Educator’s Chapel and the L.A. / O.C. gathering for Christian educators and churches.

In 2009, Reutter launched a citywide prayer event called “Pray Norwalk” to gather community members, teachers and churches to pray for the city. Since its launch 11 years ago, the event has become a tradition and the effects have been felt all over the city. Her efforts were featured in World Magazine in 2016.

“Crime is at an all-time low in Norwalk in 35 years,” Reutter said. “Churches are partnering together across denominational lines. We have God-fearing city leadership. There are Bible clubs on the majority of the Norwalk school campuses. I'm seeing God at work among the teachers and students on my campus!”