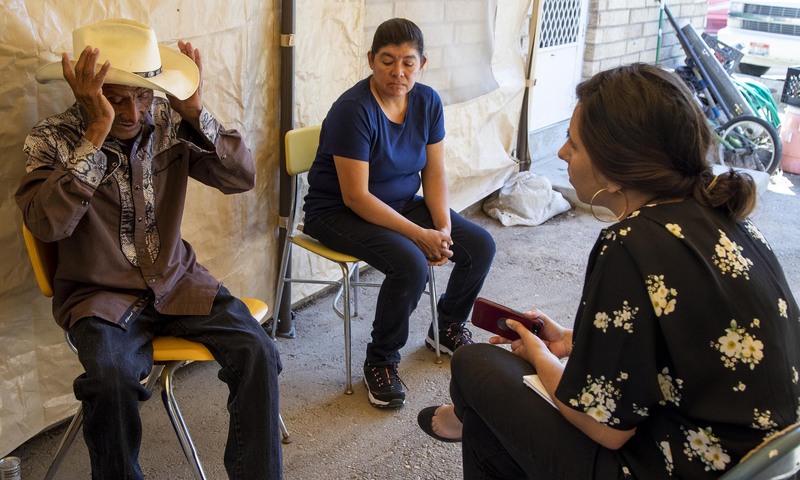 When alumna Nicole Foy (’16) began working as a reporter in Nampa, Idaho, she noticed a disparity in coverage at the newspaper where she worked — there was a disconnect between coverage in the publication and the local Latino/Hispanic community it served. Foy set out to close the information gap she noticed.

“I am really concerned about the information gaps in the community … a community who is not used to seeing themselves in mainstream news outlets,” said Foy.

Supported by her editor at the time, she worked to advance coverage at her newspaper for the Latino/Hispanic community. Today, she’s continuing that work throughout the state as one of 11 journalists accepted into Stanford University’s John S. Knight Journalism Fellowships for the ‘20-’21 year.

“Spending so much time [in the fellowship] will make me a better reporter,” said Foy.

The fellowship program is specifically for journalists like Foy who are working to close information gaps affecting people of color. Foy, who is Latina and white, has now been a reporter in Idaho for three years. She is currently working for another newspaper in Boise, where she is continuing to share stories from the Latino/Hispanic community.

“I am trying to get bilingual coverage out about the coronavirus. We don't have a lot of Spanish news up here,” said Foy. “We have radio stations, but that is about it. [The fellowship is] giving me support to expand that coverage. Idaho is a pretty isolated state.”

Foy is a firm believer in representation for the Latino/Hispanic community in the news media industry, and believes one of the best ways to serve the community is to hire within it.

“Reporters often rely on a sense of camaraderie. It really matters when they [Hispanic/Latino community members] can see themselves reflected,” Foy said in reference to seeing members of their community working in the media.

Foy pursued a story in Idaho about farmworkers who were being treated unfairly.

“A crop duster plane allegedly sprayed pesticides on them while they were working in the hop fields of Parma, Idaho,” said Foy. “My investigation into the incident won first place for agriculture reporting in the Idaho Press Club's Best of 2019 awards and was cited in the Idaho State Legislature during efforts to change the state's regulations for crop dusters and pesticides.”

As a Biola Journalism and Integrated Media alumna, Foy’s classes while a student developed the strong foundation she needed to be a reporter, she recalled. Foy shared that her concentration of Writing and Publishing was rigorous but made her understand exactly how the industry worked. She also found value in writing for the Chimes student newspaper. As a senior at Biola, Foy worked as a paid intern at the Orange County Register, which was the launch of her journalism career.

“Nicole caught the cross-cultural reporting bug in Biola's journalism program. She brought cross-cultural approaches to her course assignments, but also looked for ways to give voice to those whose voices were not being heard,” said Michael Longinow, professor and chair of Biola’s Digital Journalism and Media department. “Women suffering from sexual assault was one topic she dived into — with a four-part series for The Chimes, Biola's award-winning student newspaper. It was reporting that later generations of students built on to create ongoing awareness for violence against, and sexual abuse of women, problems too often downplayed in evangelical communities.”

Even deeper than foundational and technical training, Foy found her calling at Biola, and her faith drove her to be who she is today.

“Biola showed me that it makes you stronger if you do not divorce your faith from your work. [Christians] have a duty to speak out against injustice and speak up for the oppressed. It is our job to elevate them,” said Foy.

Foy felt especially called to be an investigative reporter because she has always been very justice-motivated.

“Christians are especially uniquely suited for investigative reporters,” said Foy. “We serve a God of justice and mercy who repeatedly says he cares for the poor and cares for the hurting.”

Foy’s time at Biola was not traditional as she had to take a year off after her freshman year because she lost her scholarships and needed to help take care of her grandmother. Despite the difficulties she faced as a college student and nonlinear path to complete her Biola degree, she is confident that God wanted her at Biola.

“I want to encourage people, especially right now,” said Foy. “For students who don't think they can finish school, it isn't over. The Lord is going to do exactly what he wants to do. The Lord’s got a plan, really, "I dropped out of Biola after my freshman year, returned to finish my degree at Biola after a year of online school and community college, and now I have a fellowship with Stanford.”

Biola is celebrating national Hispanic Heritage Month from Sept. 15 to Oct. 15. Look for more stories highlighting the diversity among Biola’s Hispanic and Latino students, staff, faculty and alumni this month.

Photo above features Foy interviewing farmworkers who said a cropduster plane allegedly sprayed pesticides on them while they were working in the hop fields of Parma, Idaho. Photo credit: Idaho Statesman photographer Darin Oswald.