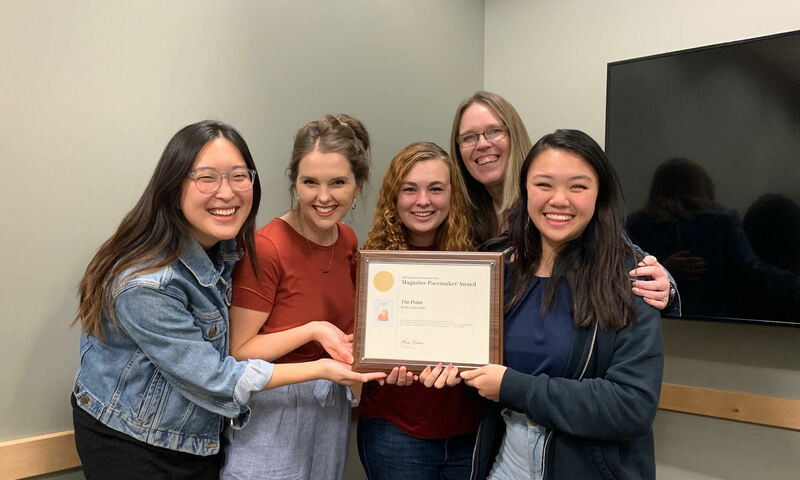 Biola University’s student-run magazine, The Point, took home a prestigious Pacemaker Award at this month's Associated Collegiate Press (ACP) conference in Washington, D.C. The Pacemaker Award is given to the nation’s top college campus publications by the ACP, with Biola’s winning Spring 2019 issue being one of only 14 magazines to receive the award out of 126 entries.

“When I look at the magazines I was able to be a part of [while at Biola], I can't help but be in awe of the beautiful and challenging details incorporated,” said alumna Rebecca Mitchell (’19), who served as editor of the winning issue. “One of the aspects I enjoy is the sheer honesty that students, staff and faculty brought in interviews and how writers, photographers and designers were willing to incorporate those in the issue.”

The Point is published twice a year and typically selects a culturally relevant theme to explore in order to bring unique perspectives to Biola’s campus.

“I'm so proud of our students and our faculty who prepare them for these student media experiences,” said Chair of Biola’s Media, Journalism and Public Relations department, Tamara Welter.

The 14 winners of the award, according to Laura Widmer, the executive director of ACP, are the “best of the best” of campus publications.

Both The Point, advised by Welter, and Gradient, a new magazine produced by students for a class taught by Professor of Journalism Michael Kitada, were recognized as Pacemaker finalists this year. The Point received a Pacemaker Award in 2008 and has since been selected as a finalist multiple times.

The Point allows students to gain more hands-on experience in writing, editing, design and photography. Mitchell, a graduate of Biola’s Media, Journalism and Public Relations department is now working for two local newspapers in Minnesota as a multimedia reporter. Mitchell has seen how working with The Point has affected her professional career.

“I grew in my willingness to approach people on sensitive topics, which makes me ask more questions and thus a stronger reporter,” said Mitchell.

Learn more about The Point.