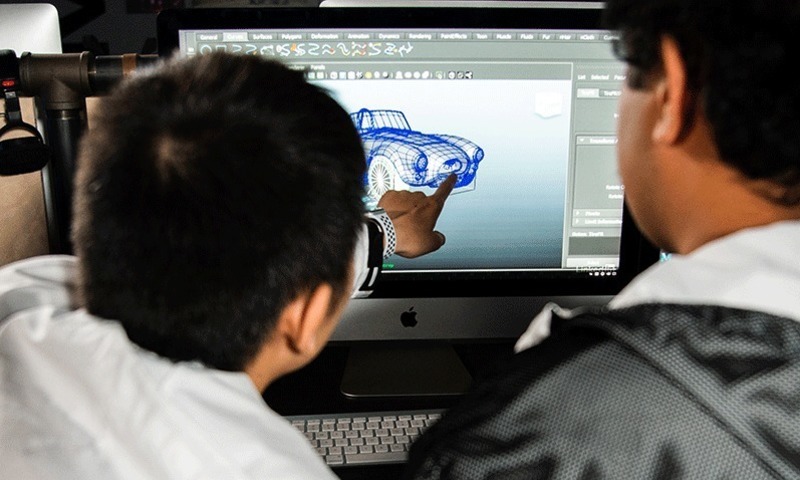 Last July, an audience gathered at the Arthur Ashe Stadium in New York for the Fortnite World Cup, one of the most anticipated esports events of the year, where a 16-year-old took first prize in a video game competition, winning $3 million.

Clearly, things have come a long way since the days of Pac-Man and Donkey Kong.

The video game industry, an estimated $150 billion-a-year industry, generates more revenue than movies and music, and continues to grow. Video games, however, have a bad reputation in some Christian circles — with content that is sometimes violent or sexually explicit, headlines about game addiction, and inappropriate online environments that target young consumers. Far less talked about is the creativity and positive potential of video game technology. How, then, should Christians engage with video games and esports?

For answers, Biola Magazine reached out to professor Michael Steffen, director of the new bachelor’s degree in game design and interactive media at Biola University’s School of Cinema and Media Arts. Steffen, who received his master’s from the USC School of Cinematic Arts, offers insights about the video game industry, the new game design program and what he likes to play for fun.

Some people may be surprised to learn that Biola is now offering a degree in video game design. For those who are unfamiliar with the industry, can you give us a sense of how this field is growing? What kinds of opportunities and needs exist for people with training in game design?

Depending on how you measure it, the video game industry is arguably larger (in revenue) than the film industry. Though traditionally played on PCs and consoles, games have seen an increase in casual players due to the rise of mobile games. Beyond the entertainment industry, games are also seeing increasing use in “serious” fields such as education, and for medical and military training.

Essentially, video games are one of the major ways that culture is being created and distributed, and so this industry needs Christians to create games that glorify God and ask difficult questions that ultimately find their answer in the gospel.

For any non-gamers out there who may think that games are just mindless entertainment, what are they missing? What good can come out of games?

Well, just as there are mindless films, there are also mindless games. But also, just as there are films with complex stories and meaningful messages, so is the case with games — though given what is advertised on TV, I can see how non-gamers could miss this. One of the greatest strengths of games is their ability to put players in a situation and then ask them to make moral choices.

There’s a great game that just came out last year called Detroit: Become Human, which has a lot of decisions like this. A central part of the game has the player-character leading a civil rights movement. As the story progresses, the player is given choices as to whether to conduct the movement peacefully (sit-ins, for example) or violently (say, throwing things at the police). These choices also affect other characters in the game, and you get to see the results of these choices play out.

According to the Pew Research Center, a majority of adults believe video games are a contributing factor to gun violence. Is this a valid position, or how would you debunk this belief?

I think that anything we take into our minds affects our thoughts, which in turn, affects our actions. We become what we dwell on, which is why the Bible tells us to fill our minds with thoughts of God’s righteousness. It would be a mistake to say that violence in video games directly causes gun violence; at the same time, it’s likely that violence in video games might push already-violent people over the edge. And I think taking in any extreme content (whether overly violent or overly sexual) has the effect of desensitizing us. That said, I do think it’s unfair to blame video games alone, given how much violence is present in modern movies and television. Again, I would primarily argue that violent video games represent only a portion of all the games that are out there.

How should Christians wisely engage with video games?

All media has the potential to be addictive. As Christians, we need to be aware of our idols (things we put above God). Are we engaging with this media in a way that glorifies God (perhaps it’s edifying, or perhaps it provides us with needed recreation)? Or, are we using this media as a substitute for things only God can give (say, filling that emptiness we feel inside)? I think media becomes the most addictive when we do the latter.

What inspired you to enter this field of work?

In particular, it was a game called Myst that inspired me to want to make games. Myst combined live-action video with explorable 3D worlds and a story that you had to uncover like a mystery. This led me to study both computer science and filmmaking. I am also strongly inspired by the gospel, particularly the idea that we all have darkness inside us, and that we cannot get rid of it without God’s direct intervention. Because I believe that the gospel is the answer to every person’s greatest longings, I feel driven to use the medium of games to communicate this in ways that resonate with audiences.

What are some of the most innovative and creative ways you’ve seen video games at work?

One of the biggest challenges in game storytelling is choice versus control. Interactivity gives the player choices over a story, however, it also takes control away from the storyteller. A recent game called The Stanley Parable toys with this idea: A narrator narrates as you play. If you listen to the narrator, you “win,” but you give up control. However, you can also ignore everything the narrator says, and you will eventually be free of him. But it leaves the game in a broken state until you restart. The gameplay itself is a commentary on game narrative, which I find fascinating.

What questions do you encourage your students to consider as they create or build their games?

First of all, “What story do I really want to tell? What interactive experiences am I especially excited about creating? Where might God’s truth already be present in my story, and how can I gently bring it out?” Next, “What ‘mechanics’ (i.e. interactive rules) will help me tell that story or achieve that experience?”

How often do you find yourself playing games? What are some of your favorite games?

I play games several times per week, and I primarily love games with strong storytelling. Some of my favorite games include Riven: The Sequel to Myst, Dreamfall: Chapters, What Remains of Edith Finch, Chrono Trigger and Detroit: Become Human.

Michael Steffen, assistant professor of game design, is a narrative game designer and the director of Biola’s game design program. He received his B.A. in computer science from UC San Diego and his MFA in Interactive Media from the University of Southern California. He has taught game design, digital technology, digital art and computer science at several colleges. Learn more about his work at steffenstudios.com.

Biola’s School of Cinema and Media Arts is launching a B.A. in Game Design and Interactive Media in fall 2020. Look for more information at biola.edu/game-design-ba.