A High and Very Noble Calling 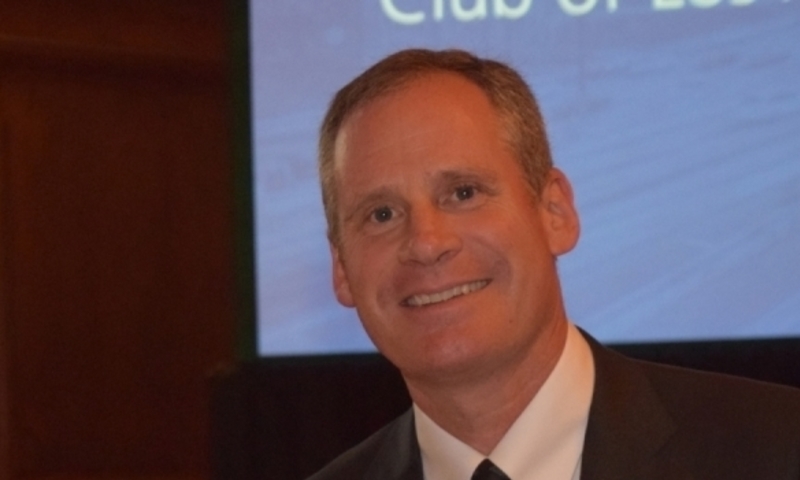 Andrew Crowell is aware of the often-negative public perception of Wall Street, but he strongly believes that, if it is done with integrity and honor, there should be no shame in a career in financial management. In fact, it should be the opposite.

“I think [financial management] is a high and very noble calling,” said Crowell. “[People in our industry] have the ability to pull a Bernie Madoff, and rob people of their hard-earned assets, or we have the opportunity to help them achieve the goals they’ve set out for themselves. For us, that’s what gets us out of bed every day; families who are counting on us to wake up and be at the top of our game every day.”

Crowell, vice chairman of wealth management at brokerage firm D.A. Davidson & Co., was a featured speaker at the Crowell Distinguished Speaker Series in fall 2019. The last name Crowell is no coincidence, as his parents, Suzanne and Donald Warren Crowell, gave the initial gift for Biola University’s Crowell School of Business building, which opened in 2007. Crowell’s father was the great nephew of both Lula Crowell, wife of Biola co-founder Lyman Stewart, and Alice Gray Crowell, for whom Crowell Hall, Biola’s Conservatory of Music building, is named.

Andrew Crowell began his career at D.A. Davidson & Co. in 2013, when Crowell, Weedon & Co., founded in 1932 in Los Angeles by Crowell’s grandfather, merged with D.A. Davidson. While it was challenging for the company to let go of the Crowell Weedon name, in D.A. Davidson, the company found a partner with similar values.

“Our advisors think this way – they’re deeply plugged into their communities,” said Crowell. “They serve on school boards, they volunteer at local nonprofits.”

D.A. Davidson & Co. turned to Crowell to pull these community service efforts together and give them some structure. The company is now in their second year of offering financial literacy education in the inner city, and have partnered with Boys & Girls Clubs and the YMCA to get financial literacy to teenagers to help them spend their money wisely.

“We want to get them launched on a smart trajectory,” said Crowell.

In addition to his work for D.A. Davidson & Co., Crowell serves on the North American Advisory Board of the London School of Economics and Political Science, the board of the YMCA of Metropolitan Los Angeles, the Advisory Board for Two Oak Investment Management, LLC and the board of Five Acres Children’s Aid Society in Altadena. He also serves on numerous educational and investment committees in his community. He is a native Californian who graduated from Stanford and holds a postgraduate degree from the London School of Economics and Political Science. Crowell has had a passion for serving nonprofits, as his previous career was at an advertising agency focused on serving nonprofit organizations.

Crowell recognized that in recent years, nationwide financial upheaval has left people skeptical about his line of work.

“Having done this for 25 years now, it grieves me that there is a sentiment in the media, and in the public eye, that Wall Street is the problem,” said Crowell. “Our firm, and many many others like ours, started because we wanted to be part of the solution. So to have this huge gulf between Main Street and Wall Street really grieves me. If we’re helping our clients, whether they’re individuals or companies, I hope that we’re helping in some small way to bridge that gulf.”

At D.A. Davidson & Co., Crowell sponsors a company-wide service week, where its 1100 employees put in 4500 service hours for over 100 nonprofits across 70 different cities and towns nationwide.

“It sounds like a lot, but it was a lay-up for me to just add a little structure and then watch the generosity of our employees roll in,” said Crowell.

D.A. Davidson & Co. donates a percentage of their gross profits yearly to charity. In 2018, the company donated $1.5 million back into the local communities they serve, including an employee gift-matching program.

“I’m proud to work for a company that exhibits [its] culture this way, and not just by a financial tote board that’s typical of Wall Street norms,” said Crowell.

At the Distinguished Speakers Series, Crowell offered three pieces of wisdom to students in attendance.

Crowell shared about his early career and several goals and plans that didn’t work out.

“Your journey may not resemble anything like a straight line,” said Crowell. “In fact, it would be surprising if you have it all figured out already and you end up where you think you’re going. It is normal for you not to know. And even with all the twists and turns and detours, it doesn’t mean you’re going to the wrong destination.”

Can you even think about purpose if you don’t know where you’re going? In his presentation, Crowell referenced Colossians 3:23-24, the verse displayed in the business building lobby, and pointed toward it as the greatest vocational purpose.

“Jesus’ focus is not on what you do, but on how you do it, as unto the Lord,” said Crowell. “Set that as your purpose. That gives meaning to life.”

At the event, Crowell was asked, “How do you do it, day in and day out?” His answer was simple but profound.

“Aim to leave situations—whether it’s a workplace, a relationship, a church—better than when you came,” said Crowell. “That doesn’t have to be complicated. It can be cleaning up a common area in your dorm. It can be a kind word, as you’re walking back from class, to someone working hard to make the campus look nice. It might mean calming an argument that you see between two of your friends. I want to leave a mark every single day. I had a client call me at 12:30 today, just before I left to come here, and he said, ‘Our daughter’s in trouble, what should we do?’ That wasn’t a distraction; that was where I needed to be right then. That’s what I mean by leaving a mark. I wanted to make that situation better.”

The Crowell Distinguished Speaker Series brings a selection of accomplished business leaders to campus to share their varied professional and personal insights and provides the opportunity to network with fellow attendees including alumni, MBA mentors, faculty, and current and prospective MBA students. Complementary light hors d'oeuvres and dessert are served after the event. The event is always free and open to all.