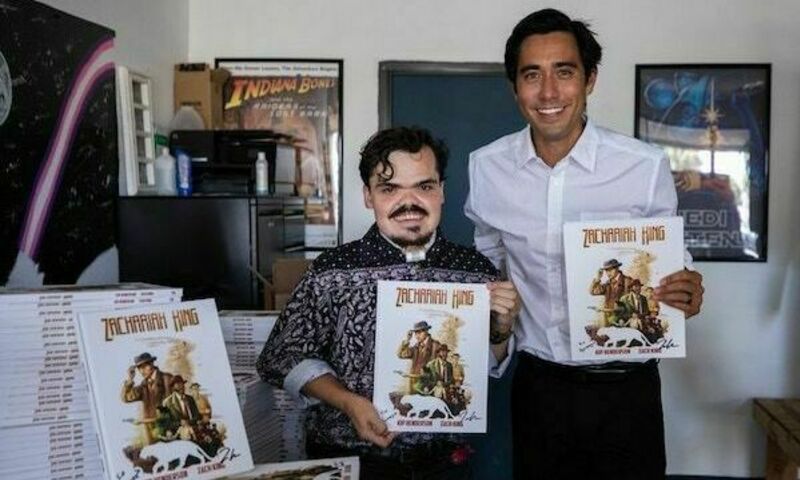 Where did YouTube magician Zach King (’12) get his powers? This question is answered in a new comic book by artist and author alumnus Kip Henderson (’19). Henderson took the concept of magic handed down from generation to generation and created a comic that weaves history, biography and fantasy into a rich tapestry called Zachariah King. The project was funded through Kickstarter and took four years to produce. Fans of King — a Biola grad and professional influencer with a vast online following — will find it an entertaining extension of his public persona, but the real star is Henderson, a graduate of the Biola University School of Cinema and Media Arts (CMA) who spent several years as a creative producer for King Studio.

Fantasy and comic book fans looking for some fresh reading will delight in Henderson’s digitally penciled and inked designs that hark back to classic comic book storytelling. The story takes place in Los Angeles in the 1930s and involves the adventures of Zach King’s great-grandfather, a Chinese-American FBI agent who can turn into a dragon at will. There are beautiful cityscapes, fight scenes, human-to-beast transformations and a supernatural creature called the Gem Keeper that controls the destiny of the protagonist. Henderson reflects on his creative process below.

What would you say is the theme of the story? What do you hope readers will get out of it, besides a very entertaining story?

Whenever I begin thinking about the thematic premise of my stories, the first place I always look is my own weaknesses and shortcomings. It’s a source of endless inspiration because of how deeply flawed I am. For this story, the weakness I was exploring was my resistance to depending on anybody. I pride myself on my independence, and have a hard time admitting to others that I need their help. That’s the arc I wanted to take Zachariah through.

Personally, learning to surrender has been the framework through which I view my spiritual life. I’ve found that there’s a terrifying amount of vulnerability in living out my Christian faith — I’ve got to surrender my hold on the things I use to protect myself. That includes lying to protect my reputation, saying no to time I could use to advance my career so I can read my Bible and go to church, or even returning to vices because I feel comfortable viewing myself as a sinner. Living for Christ means I remove all the armor I’ve crafted for myself and simply trust that God’s proposed way of life is better for me, even though I can’t see the outcome. That’s what Zachariah learns — the true measure of power is your ability to give it up.

What was the most challenging part of the creative process?

The hardest part of the creative process was assessing my own capacity. When I pitched the comic to Zach, I originally intended to complete the comic in about 6 months. I had no idea how long it would take me to make the comic, and quickly realized I had vastly overestimated the scope of the project I had signed up for. I spent the rest of my college career with literally no free time, because every second of every day I was thinking “I should be working on the comic.” It was extremely taxing, and made maintaining relationships that were important to me hard. In my experience, if you’re looking for wisdom, you’re likely going to have to sustain some amount of pain from failure to get it. That’s why I’m a big believer in failing faster — I believe that the faster you can find what doesn’t work and pivot to try something else, the pain-to-wisdom ratio becomes much more manageable.

You were a Cinema & Media Arts major at Biola, but have been practicing comic book art since high school. How did your education play into your art? What was something valuable you learned at Biola?

Because none of my professors were comic book artists, I honestly don’t view Biola primarily as a place where I learned valuable tips and tricks for my trade, but rather as a place where valuable parts of myself were nurtured and supported. My fascination with comic book history was supported by professor Dean Yamada, who for an entire semester hosted me weekly in his office to review what comics I had read. My desire to learn digital sculpting was supported by professor Mike Gonzalez, who approved CMA’s purchase of Z-brush so I could teach myself the program. My ambition to create a comic book was supported by professor Camille Tucker, who spent a semester reviewing the script I had for the comic and helping me refine it. Professors Gerry Fisher, Adam Johnson and Brett McCracken provided me a place to explore my love for critical thinking about movies in their class Faith and Film. I’m extremely thankful to all of those people because they genuinely believed that I both belonged in CMA, and that my passions were worth seeing through to the finish.