Sarah Millwee’s research poster won the Division 36, Society for the Study of the Psychology of Religion and Spirituality, contest 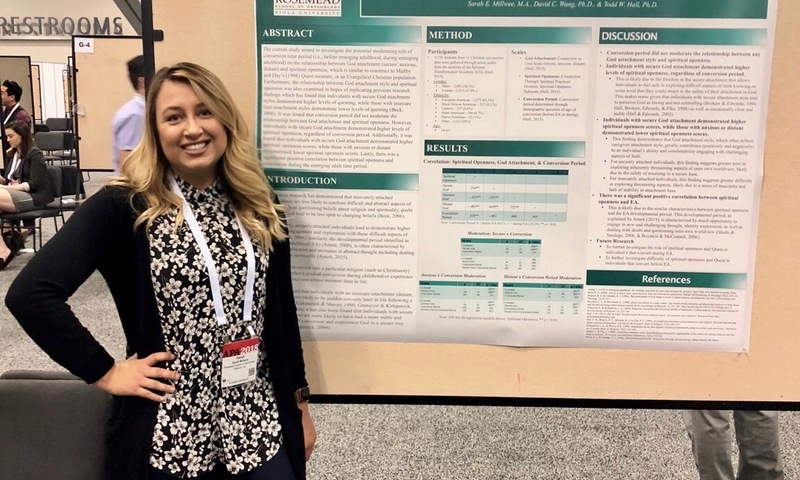 Rosemead School of Psychology student Sarah Millwee was selected as the winner of the American Psychological Association (APA) Division 36 — Society for the Study of the Psychology of Religion and Spirituality — poster contest at the APA’s 2018 Annual Convention. Her research titled, "Examining the Relationship Between God Attachment and Degree of Spiritual Openness as Moderated by Conversion Period,” was one of nearly 70 submissions in the contest.

“When I found out I won I was in complete disbelief and slowly began to take it in, as this has been a project I have been working on for years,” said Millwee. “I felt very supported by God and that my hard work had paid off, and I felt incredibly celebrated by Dr. Wang.”

Milllwee’s research explored the relationship between God attachment — how one relates to God securely or insecurely — and spiritual openness, a willingness to engage spiritual doubt and existential questions.

Additionally, Millwee examined if the age at which someone converted to Christianity impacted their relationship with God. She specifically looked at conversion from ages zero to 18 in comparison with conversion from ages 18 to 29. Millwee and her research team did not find anything in particular but did note that those who converted from ages 18 to 29 were more apt to be “spiritually open.”

“We concluded that this is likely because during emerging adulthood, 18-29, individuals are more likely to be open to other viewpoints and engage complex thought,” said Millwee.

The inspiration for this research stemmed from observation, observation of two groups: those who had suddenly converted and those who had gradually converted to Christianity, in relation to their respective levels of willingness to meet and experience spiritual difficulties.

“I wanted to see if there was something about the conversion process that impacted this,” said Millwee. “However, as I have done more research, I have found that the process is much more complex than just conversion type, and will be looking into factors that impact spiritual maturity between groups.”

In the future, Millwee plans to work with college students through the lens of clinical psychology, practicing therapy.

“This topic relates in informing me how something as central as faith can be engaged and used as a way to cope with engaging difficult questions — i.e. things that come up in therapy — as well as how it can also be difficult if there isn’t a sense of support in relationship with God — so providing more support as they engage faith in college,” said Millwee.

Milwee has discovered that the group of Emerging Adults identify with some type of faith.

“It is often a topic that comes up in therapy, so better understanding their attachment history helps me know what kind of therapy interventions or support the student might best need to flourish,” said Milwee.

Milwee notes that being a student at Biola created an environment in which she could think about the ways in which faith and her area of study related. Her undergraduate and especially her graduate programs have provided space for reflection and growth in passion regarding questions about faith, like the ones she most recently explored in her research.

“Having this opportunity absolutely aided in my passion for this research that contributed to winning the award for it!,” said Millwee.

President Barry H. Corey addressed all students, faculty and staff in person since the start of the pandemic