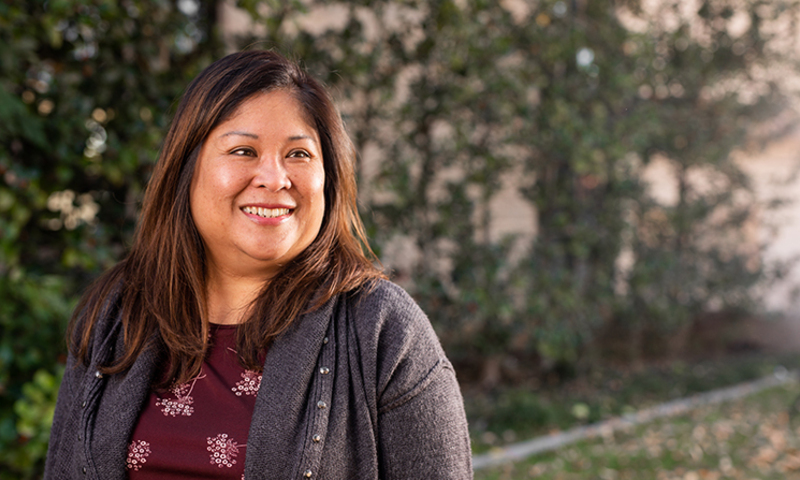 A few years ago, Lori Salvador (‘19) decided it was time to go back to school — without actually going back to school. From her home on the island of Oahu, Hawaii, Salvador became one of the first students in Biola’s fully online bachelor’s programs, a flexible option for students of all ages and backgrounds. After she and her husband of 25 years became more involved in their church as premarital coaches, she realized she wanted to study applied psychology and pursue a career in marriage and family counseling. In December 2019, she made the flight to Southern California to realize her dream of receiving a college degree (with membership in Epsilon Kappa Epsilon, Biola’s honor society, no less).

How long have you lived in Hawaii?
I was born in Torrance, California, and we lived in California until I was about 6 years old and then moved to Hawaii. I was raised on Oahu in a little town called Waipahu. I’ve been here since.

What led you to pursue the online bachelor’s program at Biola?
It was always my lifetime dream to get a college degree. I wasn’t a Christian until I met my husband. Prior to that, I did get into a relationship that wasn’t that great and it was directly out of high school. ... I had my children very young. For a long time, I was a single mom trying to get through life and so I couldn’t go to college. I was working, raising three kids. I was very blessed that I had met a man who was willing to raise my children as his own. So, we got married and we built a very good life together.

How did you decide to pursue a degree in applied psychology?
A lot of things were coming up with mentoring young adult women. Things from their past were starting to come up in their life, and I didn’t know how to help them walk through it because they had suppressed it for so long. But God was starting to unravel things. So that’s where I really got interested in psychology, because I wanted to understand the background of people and how I can better help them.

How did you feel about going back to school?
I was very stressed out in the beginning because I haven’t been in school for so long, so I was definitely afraid of that discussion board. One of the younger girls I disciple — well, there were several of them — they were laughing because they were like, “Auntie, 200 words? That’s only two paragraphs!”

What are your thoughts and feelings now, having graduated from the program?
To be a lifelong learner, you really have to be disciplined. Being in school for these last two years has definitely taught me how to be a lifelong learner, so it’s been a great journey for me. I look forward to doing graduate school. ... I really want to pursue being a counselor, being a marriage and family therapist.

What are some words of wisdom you would want to share with others like yourself who may be thinking about going back to school?
We never stop doing God’s work, and so no matter how old you get a degree, God will always use it for his glory. And I clung onto that a lot during my time, because you’re in school with a lot of young people. ... I should be thinking about retirement but God’s work never stops, no matter what age we are. God wants us to pour into the next generation, and if God opens those doors to pour into the next generation, then we have to be well equipped for it.