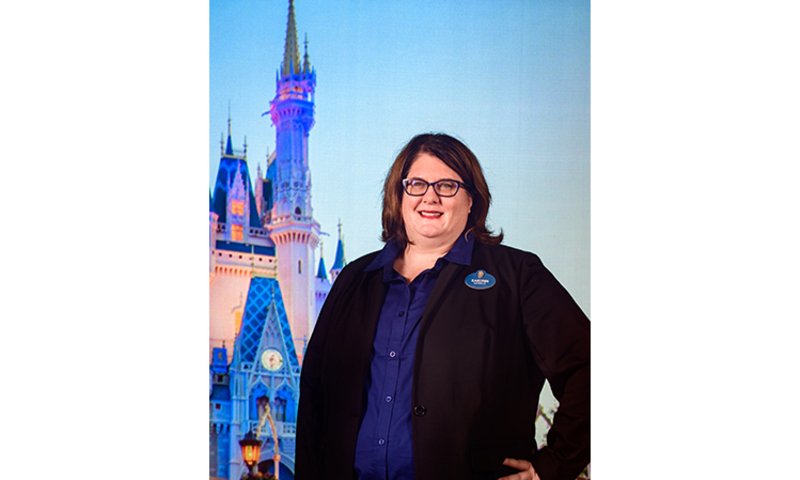 In 1998, a little boy was diagnosed with terminal brain cancer. His dying wish was to meet Buzz Lightyear. At the time, Karlynn Holbrook (MOL ’06) was an undergrad at Cal State Fullerton and a pageant helper — close friends to Disney characters — at Disneyland. As a “very good friend” of Buzz Lightyear, Holbrook’s time had come to make one boy’s dying wish come true.

Karlynn Holbrook believes in magic because she’s seen it. With Disney, she creates it.

After graduating from Biola with a master’s in organizational leadership, she worked at every Disney park around the world and is now senior manager of organizational operations at Walt Disney World. Essentially, she trains executives and leads a team that handles everything from budgets across all of Disney to billboards off the 5 Freeway. As a member of the Executive Steering Committee, she helps senior leaders ensure the department is running smoothly in every aspect of the team’s operations. But her journey wasn’t a straight line.

After serving as a pageant helper, she advanced in communications for 16 years. Then she was offered a position at Walt Disney World that took her around the globe. She was on the Aulani task force in Hawaii, at groundbreaking for Shanghai Disney Resort and at Hong Kong Disneyland during its fifth anniversary. At Walt Disney World, she worked her way to director of internal communications. Then, in 2014, she got an offer she never expected: to work with the Disney ABC television group in Burbank, California. She accepted. But after three years, she had an epiphany.

“I worked with a lot of red-carpet talent and met some amazing people,” Holbrook said. “But you know, it really doesn’t matter how high you work your way up in an organization. What matters is where your heart and your passion is. ... It’s not about just climbing the corporate ladder. It’s about where God wants you to be.”

It turned out God wanted Holbrook back at Walt Disney World in the position she has now, she said.

Holbrook is a firm believer that Christians can be successful business people without sacrificing their moral compass.

“There’s definitely a stigma attached to being a Christ-follower,” she said. “So you’ve got to lead with actions first. You’ve got to show them that, ‘Hey, I love on everybody! I want to see you be successful. ... I’m not going to go down a moral low ground just because other people are doing it.’ And believe it or not, that stands out by itself.” In August 2019, Holbrook received the Walt Disney Legacy Award — a peer-nominated award given to less than 1% of Disney’s employees.

Holbrook still keeps a picture of that little boy with Buzz Lightyear on her desk. She’s taken it to every job she’s ever had as a reminder of the impact we can make when we “lead with love.”