Empowered by a historic campaign that raised $214 million, Biola University is poised to begin a bold new chapter 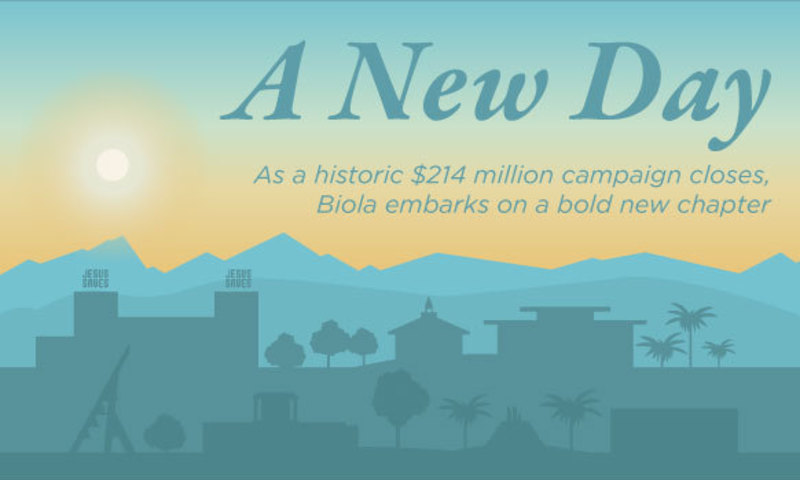 On a January day a little more than five years ago, the Biola Board of Trustees cast a vote that made me feel both exhilarated and daunted. By formally approving the launch of a five-year, $180 million fundraising campaign, the board was setting Biola on a course to bold new heights — but also tasking us with raising an amount nine times larger than any of the university’s previous fundraising campaigns. Yet we had faith that God would provide. He had provided for Biola for more than 100 years, after all, through recessions and the Great Depression and storms of other sorts, sustaining us financially and gradually expanding Biola’s size and impact. Why would he stop providing for us now?

Five years later, as I reflect on the successful completion of A Soul of Conviction, A Voice of Courage: The Campaign for Biola University, I am full of gratitude. God has indeed provided, beyond what we could have asked or imagined. Not only did we meet our goal of raising $180 million by Dec. 31, 2016, but we exceeded our goal by $34 million. Thanks be to God.

And thanks be to you, too! The entire Biola family stepped up in this historic campaign: alumni, parents, grandparents, faculty, staff, donors, foundations, friends and friends of friends. This was a team effort! We could not have done it without you. And so to all who prayed for and donated to The Campaign for Biola University, whether you gave $12 or $12 million, thank you. Your support was invaluable.

One of the themes of this campaign was continuity between Biola’s past, present and future. The name of the campaign reflects this. “A Soul of Conviction” is about remembering the unchanging truths that have always guided us, the truth of the gospel and the gift of God’s Word. “A Voice of Courage” is about moving forward unafraid, speaking truth and living with winsome relevance in a changing world. Conviction is about not feeling the need to reinvent the wheel in our core beliefs. Courage is about the freedom to adapt and explore new boundaries of how our 109-year-old mission might be enacted in today’s world.

The past and the future came together on May 9, 2015, when we publicly launched the campaign with our Conviction and Courage Gala in downtown Los Angeles, just blocks from where Biola was founded in 1908. In a large, clear-top tent behind the Ace Hotel, we gathered beneath the red neon glow of the “Jesus Saves” sign, which originally donned the tower of Biola’s first building at Sixth and Hope streets. Inside the Theater at the Ace Hotel, where we celebrated the campaign launch with a concert from Phil Wickham, Josh Garrels and The Brilliance, Psalm 119:89 is inscribed above the door: “Forever, O Lord, Thy Word is settled in heaven.” These are the same words that were once engraved above the entrance to the original Biola building.

These historical connections reinforced the continuity of this campaign between our past and future. It was never about taking Biola from x to y, but from x to x-squared. It wasn’t about rethinking the mission for which Lyman Stewart and T.C. Horton founded Biola in the early 20th century. It was about maximizing the effectiveness of that original mission for the 21st century.

The Biola of today is asking the same questions that Biola’s founders asked a century ago: How can an educational institution in a major global city like Los Angeles best educate men and women to make an impact on the world for Christ? The answer then and now is centered around a robust education in the Bible and its integration in the broader disciplines. But the specifics of what that looks like have changed.

The Biola of today is bigger, more global, more diverse in its community and more interdisciplinary than the Biola of yesteryear. The technologies we use are different. But the mission remains the same. Biola today is sending out students as it always has: with Christ-centered conviction, courage and compassion to be the lights Jesus calls us to be (Matt. 5:14).

One of the personal joys I experienced through this campaign was visiting some of these “lights” all over the world. As part of our 16-city Campaign National Tour, I was able to see how Biola graduates are making a difference in places like Washington, D.C., Phoenix, Portland, New York City, Jakarta and Seoul. Everywhere I went I was impressed to see the ways alumni were living with conviction, speaking with courage and loving with compassion. I know Stewart and Horton would have been impressed too.

At our Portland event last October, legendary evangelist Luis Palau was our speaker, and in his remarks he called Biola “a model for all Bible colleges and universities.” At our Los Angeles event in November, alumnus David Kinnaman (’96), author and president of the Barna Group, described the unique educational experience of Biola as a “counter-culture for the common good.” At our Chicago event, pastor and radio host Christopher Brooks (M.A. ’10) shared about how Biola shaped his view of urban ministry and God’s heart for cities.

Across the world we are hearing words like this from alumni, investors, observers and friends: Biola University is an institution occupying a rare and important space in higher education, one that the world needs now more than ever.

A Soul of Conviction, A Voice of Courage: The Campaign for Biola University has been about amplifying and accelerating the forward momentum that is already underway at Biola. There are so many encouraging signs of how this is happening now, and what the future holds.

One of the major emphases of the campaign has been providing facilities that inspire learning. Momentum in this area is hard to miss if you have been to campus recently. A new residence hall (Blackstone), a renovated Eagles’ Nest and patio, a transformed Emerson Hall (from a residence hall to faculty offices): this is just some of what is new in the last few years.

The biggest change to the campus “skyline” is still to come, with the Alton and Lydia Lim Center for Science, Technology and Health now under construction and set to open in less than a year. The area just south of Metzger Hall is currently home to a rising four-story steel skeleton that will soon become the largest academic building on campus. We look forward to the momentum this building will represent for our newly launched School of Science, Technology and Health, under the leadership of founding dean Paul Ferguson.

The next few years will bring even more campus improvements, with a new Admissions Welcome Center for prospective students set to open, along with a dramatic facelift to the interior of Calvary Chapel from internationally known Danish artists Peter Brandes and Maja Lisa Engelhardt.

More than the buildings and campus improvements, however, momentum can be seen in the people that comprise the Biola community.

This fall we had one of the largest freshman classes in our history, and we saw 8 percent growth in students of color among freshmen. Our students are graduating faster than they were a decade ago, and our graduation and retention rates are higher than average for our category. There is great innovation coming out of our Division of Student Success, led by dean Carrie Stockton, including a FirstGen Scholars Program that supports incoming students who are in the first generation of their family to graduate with a bachelor’s degree.

I believe today’s staff and administration team is the strongest in Biola’s history. With Deborah Taylor newly installed as provost and senior vice president, and André Stephens recently appointed vice president of student development, our leadership team is strong, diverse and united in the challenges they are together addressing. Similarly, our Board of Trustees is in a strong position right now in its composition, its diversity and its unity.

Another emphasis of the campaign has been a focus on academics and influencing the world of ideas. We are seeing momentum here as well. We have recently received full 10-year accreditation by the WASC Senior College and University Commission as well as the Association of Theological Schools — a very important endorsement of our academic strength!

Our faculty gets stronger every year, and this fall we welcomed 15 talented Christian scholars with graduate degrees from places like Stanford, Harvard, Durham, UC Berkeley and the University of Basel. They join a robust faculty with scholars who have come to Biola from prestigious universities all over the world, from Boston to Oxford and beyond.

Across our eight schools we are seeing innovation in program development and dramatic growth in online education, spurred on by the campaign’s investment in technology and global reach. Our global student population has grown and our roster of online programs is expanding, with three new fully online master’s degree programs launching in Talbot School of Theology in 2017, and others following in subsequent years. With the Biola Startup Competition and Praxis Academy, the Crowell School of Business is raising the profile of Biola as a hub of business entrepreneurship. Our Torrey Honors Institute and graduate apologetics and philosophy programs are internationally respected, and two of our philosophy professors — William Lane Craig and J.P. Moreland — were recently included on a list of the “50 Most Influential Living Philosophers.”

Exciting things are also happening in athletics, with our move to join the NCAA Division II on track. We will become a provisional member of the NCAA in 2017–18 and should gain full membership by 2019–20. Our student-athletes are excelling and our athletics staff is stronger than ever, led by Athletic Director Bethany Miller.

There is much more that could be said about the momentum we are seeing at Biola these days. In my 10 years of leading Biola I have never been more optimistic about the future. I’ve said it often this year and I mean it: Biola’s best days are yet to come.

STRENGTH FOR THE FUTURE

Biola University is in a strong position in 2017. We are academically strong. We are spiritually strong. We are fiscally strong, thanks in large part to the generosity of many of you who have given to our campaign. But as we look to the future and build on strength, our need for investors will be greater than ever.

Another key part in our affordability efforts is the Biola Fund. With a goal of more than $3 million each year, this is a pool of privately donated money that goes toward expanding student scholarships, enhancing the extracurricular experiences for our students, improving campus life and strengthening our academic core. As we move beyond The Campaign for Biola and consider the elements of our next comprehensive campaign, the Biola Fund is our fundraising priority. And we will need your help!

Thank you again for praying for Biola during this campaign. Thank you for donating. Thank you for reading! And thank you for continuing to believe in the importance of Biola University. Our mission is sacred, and the field is the world. The work continues, and we press on in faith.

Barry H. Corey is the president of Biola University.