The Best Books of All Time

Professors and alumni guide readers through the classics of Western thought 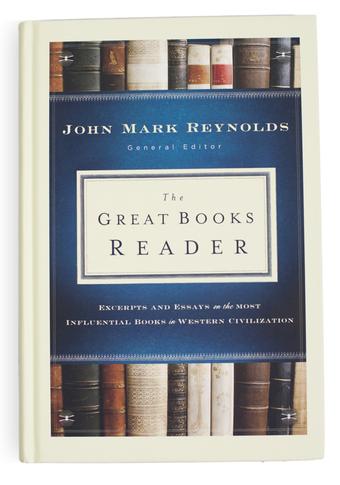 What can Christians learn from writers like Aquinas, Marx, Nietzsche and Erasmus? What about Chaucer, Locke, Dante and de Toqueville? A lot, according to The Great Books Reader, a substantial new volume of excerpts and essays on the most influential books of Western civilization.

The 656-page book — released in September — is edited by John Mark Reynolds, professor and director of the Torrey Honors Institute at Biola University, and features essay contributions from several other Torrey professors and Biola alumni.

The volume — likely to become a sought-after textbook for educators — consists of excerpts from major works of 29 famous thinkers, ranging from Homer’s The Odyssey to Jane Austen’s Pride and Prejudice. Each primary work is accompanied by a brief essay illuminating the excerpt and putting the work in context.

Reynolds believes the book is a useful first handbook for facilitating the “necessary and practical” virtue of being well-read. He hopes the Reader will help those raised on reading blogs learn to love reading books.

“Reading great books can be like going to the dentist: a task we know we should do, but put off for dread of the torture,” Reynolds said. “This reader tries to lessen the pain and increase the initial pleasure of taking one’s intellectual medicine.”

In addition to the numerous Biolans who contributed to the Reader, other prominent thinkers offering essays in the volume include William Dembski (writing on Isaac Newton), Hugh Hewitt (on Alexis de Toqueville), Philip Johnson (on Charles Darwin), Peter Kreeft (on Augustine) and Frederica Matthewes-Green (on John Milton).

Reynolds believes that for people coming to the canon of Western literature for the first time, The Great Books Reader will provide good questions and practical advice on how to read the texts. But it’s not “Wikipedia for Christians,” Reynolds notes in the introduction, where he describes the volume as an introduction to the Great Conversation, advising readers: “Don’t lose the flow of ideas through time by becoming overly focused on details.”

As a sort of Torrey Honors Institute in microcosm, The Great Books Reader serves as a helpful resource for schools or colleges looking to provide students with a great books education. It’s a collection intended not to save a Christian’s soul but to improve their mind — to help develop well-read Christians who read the sacred Scriptures but also the classic writings that have had the greatest influence on our civilization.

“Christians helped form the broader civilization of which America is a part and while any missional school knows this is not the whole world, it is still the world where many of us live,” said Reynolds. “As a result, we want to love it by learning about it: for good and bad.”

More than a dozen Biola professors and alumni contributed essays to accompany excerpts in The Great Books Reader. They include: