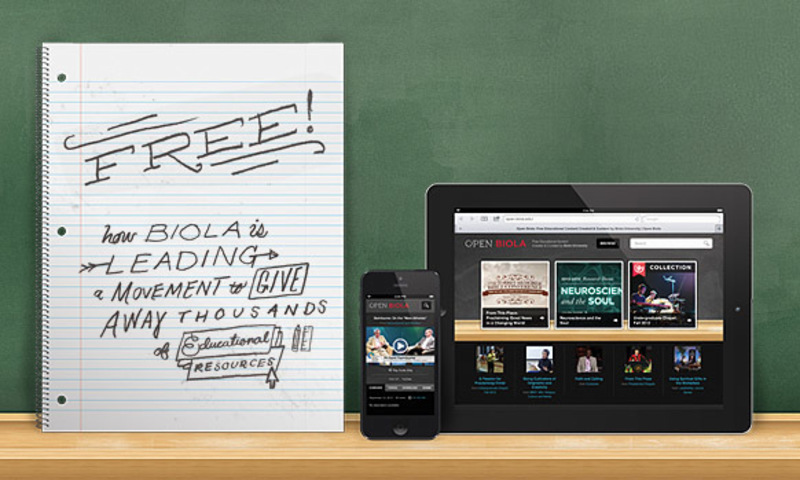 On a Wednesday back in August, professor Joanne Jung paced across a computer screen in Indonesia, leading a class discussion on personality types and spiritual formation. About 3,200 miles to the southeast, professor Doug Geivett delivered a video lecture about worldviews and movies to a viewer in Melbourne, Australia. And up in Belfast, Northern Ireland, someone with an apparent interest in creation care watched professor Garry DeWeese teach a class on environmental ethics.

Welcome the world of Open Biola, a groundbreaking new website that offers hundreds of prerecorded Biola classes, lectures, articles and other educational resources, without payment or registration. Found at open.biola.edu, the site allows visitors from anywhere in the world to easily search, stream, download and share videos and other learning materials that engage academic topics from a Christian perspective.

The site is a major milestone for Biola — the next step in a significant effort to serve the global learning community, particularly those who may not otherwise have access to such biblical resources, said Biola President Barry H. Corey.

“Open Biola represents Biola’s commitment to make our most beneficial educational resources widely available to anyone who has access to a computer or a mobile device,” Corey said when the site launched in August. “As a source of thoughtful Christian perspectives on topics ranging from business and science to philosophy and theology, it is our hope that Open Biola will serve the needs of Christian and secular audiences around the world by helping to articulate and foster a biblically centered worldview.”

Offering free resources is nothing new for Biola. Even from its earliest days, the Bible Institute of Los Angeles sought to equip believers with books and training for little or no charge (as professor Fred Sanders recounts in this issue).

In recent years, the university has made a push to get more of its offerings online, particularly as it has joined other universities in sharing hundreds of free class videos and audio files on both iTunes U and YouTube. Over the past few years, Biola has built up one of the 100 most-viewed university channels on YouTube, and until recently was also recognized as one of 42 “featured providers” on iTunes U, spotlighted alongside such schools as Cambridge, Cornell, Harvard, MIT and UCLA.

Now, Open Biola — an idea several years in the making — seeks to expand greatly on the impact of those resources. While the site offers much of the same content that has previously been available (and will continue to be available) on YouTube and iTunes U, it also includes several distinct features designed to enhance visitors’ experiences and simplify the search for information. Specifically, Open Biola allows visitors to:

All told, the site is one-of-a-kind in Christian higher education. As of November, Open Biola had more than 1,500 individual resources, including more than 829 hours of video and audio, from 470 different Biola professors and guest contributors. And more content is being added continually.

David Nystrom, Biola’s provost and senior vice president, said Open Biola can be thought of as the university’s tithe to the world — a way of giving from its resources to serve the global cause of Christ.

“We are doing this because we think that there’s material here that could be of benefit for God’s work worldwide,” he told Christianity Today in October, adding that the site embodies Jesus’ teaching of giving without expecting anything in return.

That’s not to say that all of Biola’s online resources will be free. The university continues to charge tuition for its numerous for-credit online degree programs and classes, and is working to expand the number and reach of these paid online programs in coming years. Open Biola, while offering the full recordings of dozens of classes, doesn’t involve enrolling or certification for those who view classes on the site.

But together, between the tuition-charging programs and the free resources, university leaders hope to help meet a growing need for theologically conservative thinking across the globe. This commitment is outlined prominently in Biola’s newly released University Plan (biola.edu/about/mission), which identifies seven aspirations that will guide Biola forward over the next decade — including a desire to extend Biola’s educational reach throughout the world.

Open Biola is one of the plan’s first major accomplishments, and so far, it appears to be making a significant impact.

Already, Open Biola has generated a strong following. Since its launch in August, the site has attracted more than 12,000 unique visitors from 128 countries. About 17 percent of the total traffic has been international, coming from such far-off countries as India, Brazil, China and Saudi Arabia.

And with more than 52 days of content viewed so far, the site’s analytics show that on average, someone in the world is now watching free content on Open Biola at any given moment of the day.

Chris Grace, Biola’s vice president for student development and university planning, said he’s been amazed by the impact of the courses, whether on Open Biola, iTunes U or YouTube. Grace, who is also a psychology professor, said he gets a new email at least once every few weeks from a viewer who has tracked down his contact information to thank him for his Intro to Psychology lectures. They come from all backgrounds: a 50-year-old man in Bahrain, a university professor in Switzerland, a young woman in Puerto Rico. Some of the most entertaining notes are from students at other universities.

“My prof is useless, but after watching your lecture, things just stuck more,” one read. “You presented it in a fun, engaging manner, and I just have to tip my hat to you.”

Professor Erik Thoennes — whose Theology 1 and Character of God classes are popular resource on iTunes U and who now has more than 50 videos on Open Biola — said it’s been encouraging to get notes from people around the world who have reported growing in their passion for Christ as a result of watching the online courses. It’s particularly touching to hear from those who aren’t able to enroll at Biola because of finances, location or other life circumstances.

“Thanks so much for your passion for Jesus,” one person wrote. “Thanks to the miracle of technology, I am being deeply affected by it, years after you recorded it. Awesome!”

And it isn’t just Christians who are viewing the content. Grace said he knows that many of the people who view his online lectures are not believers, and he hopes that the Christian perspectives that are integrated into Biola’s classes are able to plant seeds, however small.

One such example recently came in the form of an email from a professing atheist who had come across videos of a Biola art class, and admitted that he was expecting to be subjected to the “rantings of some preachy, benighted, Bible-thumping philistine.” Instead, he was pleased to find the stereotypes proven wrong by the course’s rigor and sophistication, he wrote.

“That person’s perception of a Christian institution and a Christian intellectual just changed,” Grace said. “That is just one more person who is now less likely to say, ‘Why would you go to a Christian university?’ That is awesome. I’m just continually amazed at the untold impact these courses are having.”

To explore Open Biola and its growing collection of more than 1,500 free educational resources, just visit http://open.biola.edu. Here are three popular ways to browse the site and find something that interests you.

Open Biola has more than 100 “collections” of content, which organize related videos into a single group. This option makes it easy to find all of the videos from a semester-long class, an academic conference or a chapel series.

Each item on Open Biola has been classified according to its subject matter, making it easy to find a resource you’re interested in. For example, clicking on “ethics” from the home page’s topic list leads to more than 100 resources. From there, you can search deeper within the results by clicking a second topic, such as “politics.”

Each of the 470 people who have contributed content to Open Biola — whether classes, conference lectures, chapel messages, articles or something else — has a profile page. There, you’ll find the author’s brief biography, social media accounts, links to published books and the full directory of the author’s Open Biola content.