What is Sacred Space? 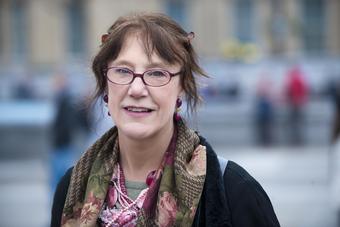 As part of Biola University’s Year of the Arts, philanthropist, art historian and collector Roberta Green Ahmanson was invited to be Biola’s 2011–12 “visionary in residence.” Last spring, environmental designer John Chan was the first visionary in residence, choosing the theme “The Future of Paradise,” an interdisciplinary exploration through the vantages of art, architecture, urban studies, theology and ecology.

As the second visionary in residence, Ahmanson — who chairs the board of New York’s Museum of Biblical Art (MOBIA) — has chosen the theme of “Sacred Space.” As part of this, Ahmanson has helped to organize and fund a yearlong series of exhibits, interdisciplinary lectures, concerts, readings, symposia and collaborative projects (see a calendar of this year’s events).

Biola Magazine recently sat down with Ahmanson — who along with her husband, Howard, was listed among the 25 “most influential U.S. evangelicals” by Time magazine in 2005 — to ask her about “sacred space” and the importance of art in the Christian life. The following is an edited transcript of the interview.

We’ve got so many strands of the arts that will be a part of this year. The goal is to emphasize the essential role that the arts play in being human, particularly in being a Christian human, because the arts are about our ability to create — which we get from being created in the image of the Great Creator.

You have selected “Sacred Space” as the theme for your yearlong collaboration with Biola’s “Year of the Arts.” What do you mean by “sacred space?”

A friend of mine who is Russian has done a lot of work on something he calls hierotopy, which is sacred space, and how hierotopy is an art form. Human beings create sacred spaces — spaces where they can worship, spaces that honor God. This is essential to being human.

All the arts play in to creating sacred spaces, because a space is both its architecture and its furnishings, its sounds, its smells, its touch, its taste. If you think about it, the Christian liturgy historically was in itself a dramatic form, with taste and touch and sight smell and sound. You had the architecture of the space, people moving in the space, people taking the Eucharist in the space, you heard singing and instruments, you smelled incense, you could touch the pews, the walls. All the arts, if you will, come to play in the liturgy, but when we take them out of the church and in to the world, they don’t lose that power.

One of the projects at Biola this year is going to be a charette, which is an architectural term for bringing a bunch of people together to figure something out. It will be led by architect Paul Bertelli and Danish artist Peter Brandes. They are going to lead a charette to design a sacred space at the Orange County Rescue Mission’s Double R Ranch. Paul and Peter are going to lead a group of Biola people and others to do this charette to plan this space, and it will eventually be built. There are also some plans for some Biola students and faculty to create some sacred spaces on the Biola campus.

The purpose of all this is to talk about how we understand space and our presence in space, the kinds of spaces we create and what we communicate by them.

What would you consider the “sacred spaces” in your life? 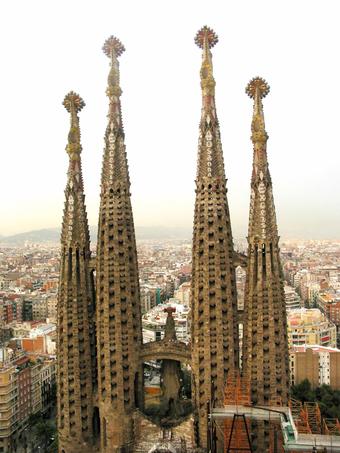 Two places come to my mind immediately, and then a couple more. One is a church I attended for many years in Toronto — little Trinity Anglican Church. It was a place where I could think and pray and worship, and where I felt at home. The same was true of the old St. James Episcopal Church in Newport Beach. It was built in the ’50s when people built churches like churches. One place on the planet that makes me feel overwhelmed with awe and wonder is La Sagrada Familia in Barcelona, Gaudi’s great church growing out of the ground. But also in Barcelona is Gaudi’s Park Guell, which is a place I love to go because I love to be there, sit and see his inventiveness. Places like Park Guell are places where you can contemplate.

In a culture that is so distracted, impatient and busy, how do you make the case for the importance of making space for the arts?

When you only do the utilitarian you become dry, you become cynical, you become dead. If you are overstimulated you become agitated and you can’t do anything. Augustine says our hearts are restless until they rest in God. We are restless because of the longing which is deep within us. No matter how busy you are, you need to make space.

What would you say to Christians who say that we shouldn’t waste money on buildings and aesthetics when we could be using it to serve the poor? Why is art important for the mission of the church?

The medieval church served the poor. They had alms houses all over Europe. But at the same time they were doing that they were building Chartes Cathedral. There was an understanding that that beauty, that grandeur, that extravagance of color, design, shape and space was something that human beings longed for and needed, even when they were sick and poor.

There’s a Catholic theologian philosopher named Dietrich von Hildebrand who wrote a book called The Nature of Love. In it, one of his examples is the Wedding at Cana, and he says that Christians need to understand that part of what Christ was teaching at Cana was how necessary to us celebration and extravagance is. It’s not that we shouldn’t be giving money to the poor and the suffering, but in that we are just meeting material needs. Human beings are more than that. We all have spiritual and emotional needs of our being. Needs for love, joy. The first miracle Jesus does is not to feed the hungry, give drink to the thirsty, or heal the sick. His first miracle is to make wine, and not just any wine, but fine wine for a party. Von Hildebrand says this is the extravagance of God. Why do we feed the hungry, give water to the thirsty, heal the sick? So they can enter into joy. Joy is the theme. The arts in all of their aspects bring us into joy, though sometimes the journey is difficult. Art isn’t easy, but it takes you somewhere beyond yourself and outside of your own little world. That’s the path to joy.

It’s always both/and. We need to be working to care for those in all sorts of need, but at the same time we can’t forget why. Those early Christians who had the heavenly Jerusalem on the arch over the altar were living in the present reality of the coming reality. And that’s what sacred space is all about, where you understand that it isn’t just now and it isn’t just material. We don’t live in a world that is merely material, but we live in a world that was created by someone who loved matter. God created this tension within us, but it’s also a wonderful unity.

As a lover and curator of the arts, do you have any recommendations for what a Christian evangelical university like Biola can do to improve the climate of appreciation and engagement with art?

The biggest thing I would say is that evangelical Christians need to look and look and look, and to understand. They need to engage artists who don’t agree with them theologically or morally, and to look at a lot of contemporary art. Some of it is good; some of it’s not. Like any age, there’s good art and bad art. Often though, what Christians have done is to retreat into surrounding themselves with what I would call sentimental images, which are pretty and sweet but are caricatures of reality.

You have to develop your taste. The more you see, the more you learn. A lot of evangelical Christians just haven’t looked enough. Los Angeles is a huge art city. It has one of the most important art schools in the world in Cal Arts. Then there’s Parsons, and the Art Center in Pasadena, and they’re all very good. Engage them. But also there’s MOCA, there’s LACMA, there’s lots of galleries in Los Angeles. It’s a matter of looking, and by looking you discern, trying to understand what’s the mind and spirit behind what’s going on. You develop taste by looking, by experiencing; you understand the world we live in, and then you’re able to communicate with it. But if you don’t speak the language, you can’t communicate.

Is there anything else you’d like to say about art, sacred space, or Biola’s Year of the Arts?

I think it’s exciting that Biola — with its heritage of wanting to uphold orthodoxy and share the gospel with the whole world, which is a thing to be very proud of — is taking on something that applies this important understanding to the contemporary world. I really admire Biola for its holding on to the essentials of the Christian faith while also applying it to all realms of life, including intellectual life and the arts. Biola understands that those essentials of the Christian faith have implications for all areas of life.

Roberta Green Ahmanson is a writer, philanthropist and art enthusiast who is serving as Biola’s visionary in residence for 2011–12. She and her husband, Howard, live in Corona Del Mar, Calif.