The Family That Sings Together 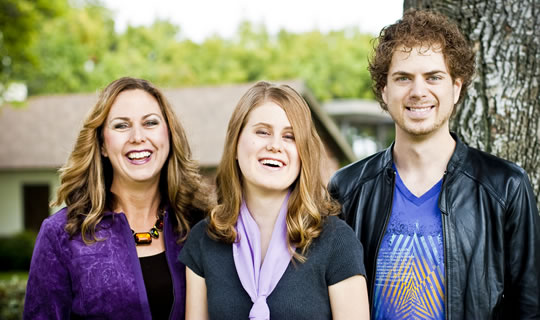 A year ago this Christmas, freshman Katelyn MacIntyre was rushed to the hospital with kidney failure. For her family, it was like a bad case of déjà vu.

The year before, the same thing happened to Katelyn’s older brother, Scott, with whom she also shares an undiagnosed visual impairment. The same week Katelyn got this news, Scott found out he had made the top 50 for American Idol season 8. For the MacIntyres, it was the best and worst of times.

But what a difference a year can make.

Today, Katelyn has a new kidney and just completed her first semester at Biola. In the spring, she cheered on Scott as he made it to the final eight on Idol. She was able to attend most of the live show tapings in Hollywood, as well as the finale and a few dates on the Idol summer tour, of which Scott was a part.

“It’s still hard to believe sometimes,” said Katelyn of her brother’s new worldwide fame. “But he’s still the same person he was. I’m so excited that he now has this platform to reach for everything he’s been wanting for so long.”

During the time that Scott was on the show, his mom, Carole (’82), moved to Los Angeles and lived in the Bel Air mansion that housed the Idol contestants. No other parent was allowed as much access as Carole, who worked with Scott — Idol’s first contestant with a visual impairment — on such things as choreography and knowing where and when to look at which camera.

The excitement of being thrust into the world’s biggest spotlight proved to be a happy distraction from the difficulties of Katelyn’s health, said Carole. And Katelyn agrees.

“It definitely was a blessing,” said Katelyn. “I’d be home in Arizona getting blood tests for the surgery, then I’d come out to L.A. and it’d be so fun to get dressed up and be in the audience and cheer for Scott.”

Before American Idol happened, Katelyn, Scott, their brother, Todd, and Carole performed and toured as the MacIntyre Family Singers. With a repertoire of a cappella jazz music, gospel, classical and Broadway tunes, they performed throughout California, Arizona, Toronto, and even at the Kennedy Center in Washington, D.C.

In the summer of 2008, the three siblings each auditioned for Idol and made it through a few rounds together, but only Scott made it to Hollywood week. Katelyn and Todd were disappointed at first but ultimately excited to support their brother as he moved on.

“Because we’ve done so much music as a family, we have this mindset that if any of us succeed we will just bring the others along,” Scott said. “So it’s definitely a family thing.”

Katelyn, who has sung soprano since age 7, is a vocal performance major at Biola and loves her classes so far, as well as dorm life in Horton Hall.

She sometimes gets recognized by people on campus who remember her as Scott’s sister and want to hear all the details about her Idol experience. She’s happy to oblige, even though she admits to being “a bit American Idol’d out.”

As to whether she will audition again for Idol, Katelyn responds with the same go-for-it spirit that has carried her through the ups and downs of the last year.

“If they’re still doing the show in a few years, who knows,” she says. “I will certainly know what to expect.”

ONLINE EXCLUSIVE: How did Scott’s faith influence his experience on American Idol? What were the best and worst parts of being on the world's biggest TV show? Read our full interview with the MacIntyre family.