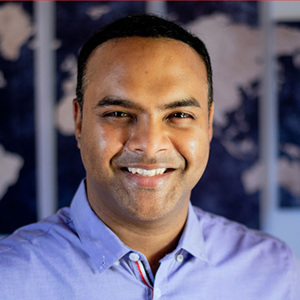 Prashan De Visser is Founder & President of Global Unites, a movement across 13 countries and counting that seeks to equip youth to transform societies by promoting hope, non-violence and reconciliation. He has received the Points of Light award from the queen of England for his exemplary volunteer service to his nation of Sri Lanka and his founding work with Sri Lanka Unites. He has been featured on NBC, BBC and Al Jazeera for his innovative peace-building approach. He is a justice of the peace in Sri Lanka and the former host of “Good Morning Sri Lanka” and many other television shows.

Prashan received his bachelor’s degree in international relations at Gordon College in Boston. Prashan went on to the University of Notre Dame, where he earned his master of arts in peace studies and public policy and was selected as a TEDx speaker. Prashan lives in Sri Lanka with his wife, Shruthi, and their two children.