Making a Career Out of Good Choices 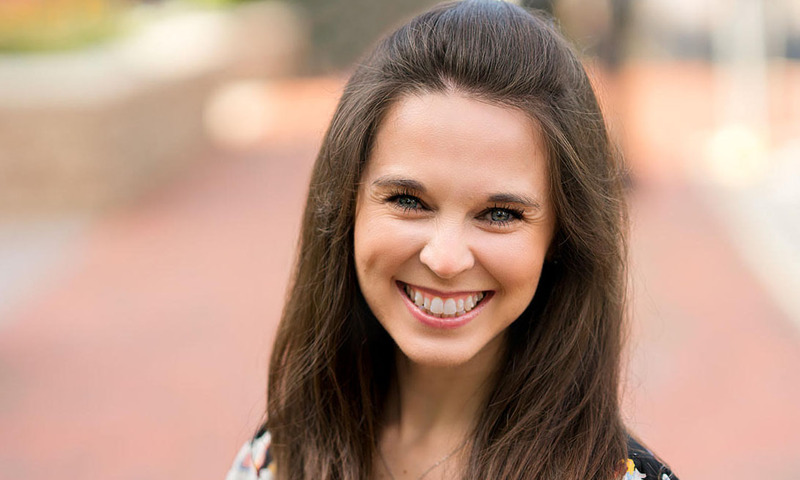 If anyone's life would — from the outside — seem like a straight, predictable path, it might be Crowell alumna Lizzie Neely Hedrick (’11). While at Biola, she was a Torrey student and served as Associated Students (AS) — now Student Government Association (SGA) — President, and she is now a respected member of Booz Allen, a multi-billion-dollar management and information technology consulting firm with offices around the globe.

But her career has been anything but a smooth road. Here, she talks about how life is less about building a single, grand plan and more about being wise across a whole series of decisions and opportunities.

I knew that I wanted to go to a Christian university.

I really liked that Biola required faculty and students to give a testimony of their faith — it felt more trustworthy in terms of the education I'd get and the relationships I'd make. Also, it was close to my parents in Apple Valley, about an hour and a half, so I could live on campus but not feel too far away. Third, I heard a lot about the Torrey program and I really wanted that. Fourth, I went to a small Christian school, and seven of the 23 students in my graduating class were heading to Biola. It was important to me to stay connected with them.

I have two brothers adopted from Asia and my family had the opportunity to go there when I was growing up, so I had a love for travel and impacting the world. So I went to Biola as an intercultural studies major. But after one semester I realized it wasn't the calling God had for me. I even signed up for a short-term mission to Asia, and the day I was accepted to go I had a deep sense that God was saying this isn't the direction I have for you right now. So I did a lot of praying and talking to others and soon felt confident that God was calling me away from that trip. I was not expecting that.

Then I found out about the international studies emphasis within business. I met some people in the business major, and I really connected with the teachers and students. Then I took a business class, and it was my favorite class of all time! I love working with numbers and thinking about overall strategic directions and how to make businesses better. I even did an international business study abroad, where I met my future husband. So I never abandoned my ministry passion, but I realized there's a lot of ways to make God known both right here and abroad by the way we do business.

I learned a lot about myself outside the classroom, too.

When I was AS [now SGA] president, that was my favorite job I've ever had! I learned so much about myself; I never saw myself as having the confidence or even the skillset to be AS president. I was surprised at how much I loved it and how much the role fit me, and that coincided with me becoming aware of the administrative gifts I never realized I had.

I found myself in a box and I had to work my way out of it.

I graduated and didn’t leave Biola; I worked there for two years as executive assistant for one of the vice-presidents. I worked with great people, but I don’t know that it was a great choice, career-wise. When I got that job immediately after graduation, it felt like a huge step up. But once I left it, it was difficult for me to step into the wider world and prove that I had these administrative qualities when the only thing on my resumé was being an executive assistant. To a lot of people, that translated as ‘Oh, you were somebody's secretary? So you’re applying here as a secretary, too, right?’ Nobody was willing to take a chance on me for anything more than that until I could prove myself.

I was married and my husband was accepted to law school, so we moved to the Washington, D.C. area. I had no connections, I didn’t know anyone, so I had to start at the bottom. I took a temporary position at ExxonMobil as a secretary, but I told them from the start, ‘This isn't really what I want to be doing; I'll take this job, but I also want to take all the extra tasks you can give me because I want to grow out of this role.” They were more than happy to oblige, and by the time I left — the company moved to Houston — I had a new title to put on my resumé.

Here in D.C., government consulting is a big thing, and one of the large consulting firms, Booz Allen Hamilton, liked my title and the experience behind it and hired me. I've been here for over six years now and for each project I have a totally different role; what they have in common is a lot of project management, which coincides with my administrative gifts and experiences.

But my current role is the one I’ve loved most here, a user success lead. I work between the users and our web application developers. I hear our users’ struggles and challenges and I translate those back to our development team: ‘What can we do to solve these challenges? Can we make their workflow easier?’ Then the developers explain to me what they can do, and I translate that back to the users. This has been so fun, working with people while still doing the administrative problem-solving part! I love it.

Graduates: You’ll be okay even if you don’t have it all mapped out.

It was pretty easy in school to feel either (a) I have a plan and I just need to follow it to the end, or (b) I don't have a plan so my life’s going to fall apart. But for me, I just kept following the opportunities and where they led and making the best and wisest decisions at each point. I could have never anticipated where it’s taken me. So it's okay if you don't know right now what you want to do; you'll figure it out, even if it takes 10 or 20 years. It's okay to do some trial and error. I wish I had been more comfortable with that when I was in college.