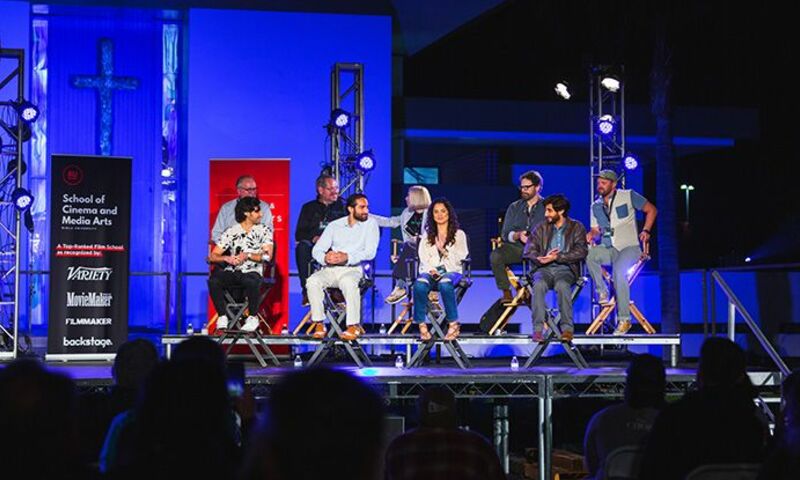 Nearly 2,000 fans of the The Chosen gathered at Biola in March for a screening and exclusive look behind the scenes of the wildly popular television show, which focuses on the life of Jesus Christ and his disciples. Producers, writers and cast members were hosted by Biola’s School of Cinema and Media Arts for an evening screening on Metzger Lawn, along with a Q-and-A, meet and greet, and other events for Biola students.

“As the first multi-episode series which focuses on the life of Jesus, known as the greatest story ever told, it reaches an audience passionate about their beliefs and faith,” said Tom Halleen, dean of Biola’s School of Cinema and Media Arts.

Episodes of The Chosen have received more than 400 million views, and the show’s popularity only continues to grow. The first two seasons of the crowdfunded show — which can be streamed for free on The Chosen app or purchased on DVD and Blu-ray — follow the beginning of Jesus’ ministry and the development of his relationship with his disciples. The show’s producers plan seven seasons in all.

Doug Huffman, associate dean of biblical and theological studies and professor of New Testament at Biola’s Talbot School of Theology, serves as a script consultant for the show. He also co-authored — with show creators Amanda Jenkins and Dallas Jenkins — a pair of companion Bible study guides tied into the show.

“The Chosen is particularly good because of its commitment to plausibility,” said Huffman, who helps to ensure that the show is historically and culturally accurate in its creative interpretation of biblical events.

Multiple events surrounding The Chosen were held on March 25 on Biola’s campus, beginning with an exclusive screening of a documentary titled Unfiltered: Gen Z Reacts to The Chosen, about Generation Z’s response to the show. Those who attended engaged in a discussion with producers of The Chosen.

That evening, the main event on Metzger Lawn gave fans the opportunity to experience a screening of an episode and a question-and-answer session with cast members Abe Martell, Noah James, Lara Silva and Luke Dimyan — who, respectively, play “Big James,” Andrew, Eden and Judas Iscariot — along with producers and writers.

The team described some of the unlikely twists and turns in the process of writing, funding, casting and distributing the show, and credited its surprise success to the miraculous leading of God.

“The reason it’s possible is because to the degree that we are each individually able, we have surrendered the work to God — it is not ours,” said executive producer Brad Pelo. “The team of us struggle every day to surrender ourselves in such a way to allow the impossible to happen, instead of making it happen on our own. I think that’s really the miracle of it, is that we every day show up and try to surrender it to God.”

The event was free for everyone and the School of Cinema and Media Arts opened the opportunity for prospective students to join. “Education at Biola occurs both inside and outside the classroom,” Halleen said. “Events like these open up new experiences for students and guests to hear about those making an imprint in the world around us.”