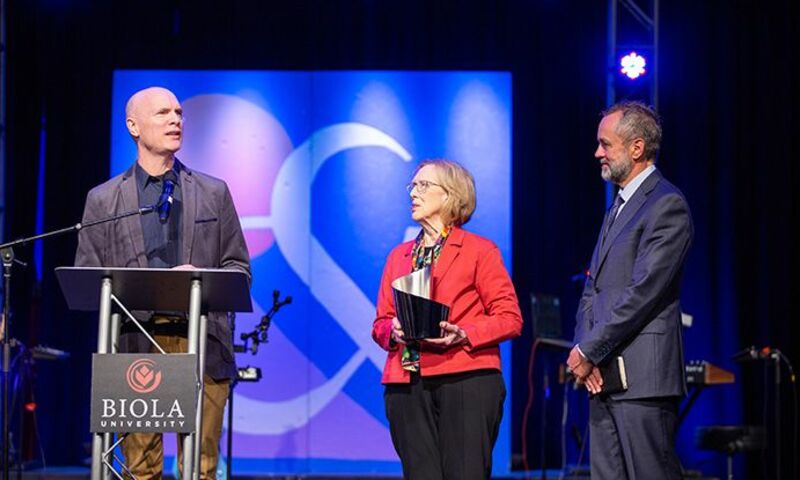 Evangelist Luis Palau — who proclaimed the gospel to hundreds of millions of people around the world throughout his lifetime of ministry — was recognized posthumously this spring with Biola University’s 2022 Charles W. Colson Conviction and Courage Award. Palau’s son, Kevin Palau, accepted the award on his late father’s behalf at Biola’s 92nd Missions Conference on March 16.

Biola President Barry H. Corey presented the award, which is given annually to an individual who demonstrates a commitment to advancing Christ’s kingdom through evangelism, discipleship and Christian worldview training and who defends religious freedom and advocates for the weak and defenseless.

“Luis Palau was a remarkable evangelist, a powerful speaker, teacher and author who impacted billions of people for the Lord Jesus Christ,” Corey said. “Paired with his courageous and obedient service to the Lord right up until his passing, he embodies what Biola’s Charles W. Colson Award represents.”

Palau was born in a small town just outside of Buenos Aires, Argentina, in 1934. He began to follow Christ at the age of 12 and soon began sharing the gospel with people both in person and through a radio broadcast.

It became clear that his calling in life was to reach people and introduce them to Jesus, a passion that grew during his early years of ministry as an intern with Billy Graham — for whom he occasionally served as a Spanish translator. Palau went on to launch his own evangelistic organization in 1978, with a focus on reaching the Spanish-speaking world through radio programs and festivals.

Over the years, his efforts expanded world-wide. All told, he held more than 500 campaigns and festivals in more than 80 nations — including communist countries such as the Soviet Union in 1989 and China in 2004 — and partnered with tens of thousands of churches in leading people to Christ. He passed away in March 2021 at the age of 86, after a three-year battle with lung cancer.

“I have no regret in pouring out my years, from the time I was a boy, for the sake of the Good News,” he once wrote. “If I was given a thousand lifetimes, I would dedicate them all to the same calling.”

Today, the Luis Palau Association continues to carry the Christian faith to all nations, led by Palau’s sons Kevin and Andrew.

The Colson Award was first established by Biola in 2014 in partnership with the family of the late Charles W. Colson, the founder of Prison Fellowship and the Colson Center for Christian Worldview. The award honors Colson’s legacy by recognizing individuals who exemplify a life of commitment to a biblical worldview and a willingness to act on biblical convictions, however risky or challenging. Past recipients include civil rights leader John M. Perkins, humanitarian Maggie Gobran and disability rights advocate Joni Eareckson Tada, among others.

A roundup of recent videos, podcasts and other resources on Christianity and culture