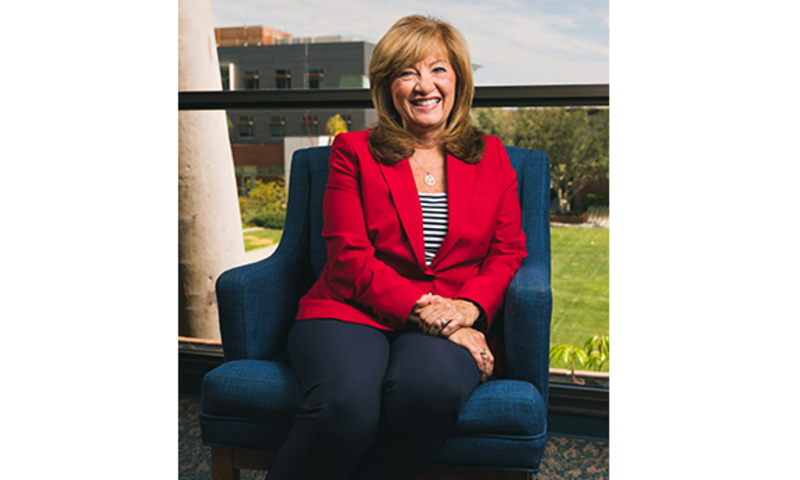 From the moment that Deborah Taylor first stepped foot onto Biola’s campus as a high school student, she knew she was in a special place.

“Something feels different here,” she remembers thinking. “I immediately felt this presence of the Holy Spirit. I hadn’t felt that on any of the other campuses I had visited. And that’s honestly what attracted me to Biola, is there’s something quite unique. I sensed the campus was prayed for and bathed in God’s presence.”

Nearly 50 years later, that distinct feeling has remained, said Taylor (B.S. ’93, M.A. ’01), reflecting back on a remarkable career that ultimately led her to the helm of Biola’s faculty. In June, she will officially retire from her role as the university’s provost and senior vice president, a position that she’s held for the past six years (and in an interim role for the year before that).

Over the course of a 21-year career at Biola, Taylor has built a lasting legacy, university leaders said. According to those who know her best, one of Taylor’s trademarks is her ability to listen — a gift for leaving people feeling heard and encouraged. This, combined with her attention to detail and administrative skill, are among the reasons why Taylor has been such an influential leader during her tenure as provost.

“I have said frequently and honestly over these six years that I have not worked with a more focused, perceptive and hardworking academic administrator than Deborah Taylor,” President Barry H. Corey said. “Her workload capabilities, her gracious spirit, her godly wisdom, her thoughtful decisions, her merciful spirit, her broad grasp, her kind heart, her prayerful discernment, her keen intuition — all of these traits and more have made Biola a stronger university and me a more effective president.”

As provost, Taylor has shouldered a wide range of duties. She has worked with academic administrators, deans and faculty on day-to-day academic issues, including faculty recruitment, promotion and tenure. She has approved new academic programs and initiatives. She has established processes that give faculty members a greater voice in how the university operates. And she has served on several leadership groups, including the President’s Administrative Council, President’s Cabinet, the Committee for Women’s Flourishing and the Faculty Senate.

Leading through one of the most challenging seasons Biola has ever faced during the pandemic, Taylor embraced her years of listening and vast experience in roles across Biola to provide a unique perspective at the decision-making table.

During her time at Biola, Taylor has seen the university from many different angles. She spent a few years as a biblical and theological studies major in the 1970s before returning to complete her undergraduate degree in organizational leadership in 1993. A few years later, she began work on a master’s degree in education, where June Hetzel, dean of the School of Education, remembers Taylor as a diligent student. Soon after Taylor graduated, Hetzel hired her as a staff member and advisor, then as an adjunct professor and eventually promoted her into the role of assistant professor and director of teacher education when Taylor was halfway through her Ph.D. studies at Claremont Graduate University.

“Deb’s ability to hear diverse viewpoints, navigate through difficult terrain, large capacity for complex assignments, and tender heart for the Lord has been a blessing to Biola University,” Hetzel said.

As a professor, Taylor received Biola research grants in 2005 and 2007 followed by the 2012 Fischer Award, the most prestigious award given annually to a faculty member. Eventually, she shifted from teaching to administration, moving into a role as associate provost of university effectiveness, where she led the university through an intense accreditation process that resulted in an outstanding accreditation review. The accreditation process provided valuable insight for Taylor to hit the ground running as provost.

“When I became the provost, I knew where we could make some immediate improvements,” she said. “Not too many people get the opportunity to say, ‘I learned all of this and now I get to be in a place where my voice can actually influence making it better and changing it.’”

As Taylor reflects on her career at Biola, she is struck by how God led her each step of the way. Even now, as she leaves Biola to spend more time with her grandchildren and family, her desire to still contribute professionally has been met with an offer to work part-time as a provost associate consultant with Credo, a higher education consulting firm, where she can support their network to develop women cabinet members.

“I would have never, ever expected this kind of opportunity and career trajectory,” she said. “But it felt really meaningful to have been able to create and improve some things that I think will make this institution stronger and better equipped to support faculty and students as a result of being in this role. The fully integrative education that we do at Biola is just priceless in terms of how it shapes people’s minds and hearts and develops students to go out in the world and live in their career in a way that displays the beauty of Jesus. I’m convinced that this is one of the most important things that we can continue doing.”