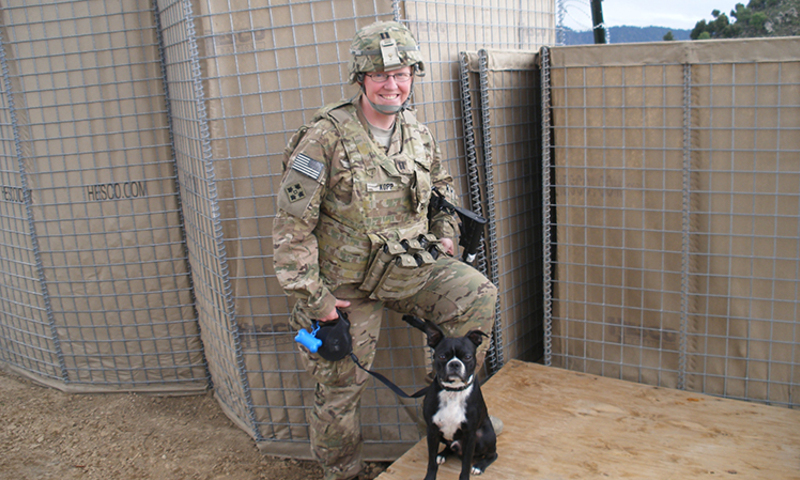 Capt. Katie Kopp (M.A. ’05, Ph.D. ’08) was drawn to the Southern California sun when applying for Rosemead School of Psychology in the middle of an Iowa winter. Not only that, but she was also interested in the unique integration of theology and psychology that Rosemead offers. Before she finished her time at Biola, Kopp was commissioned into the Army to provide psychological care to soldiers, and she never looked back, still working with veterans today. Here are five things you should know about Kopp’s experiences in the veteran mental health field.

1. She always wanted to work in the mental health field. Before enrolling in Rosemead to earn her doctorate in clinical psychology, Kopp thought she might end up going to medical school to become a psychiatrist. However, she veered toward clinical psychology in Rosemead. “Rosemead provides excellent clinical training, which can be used as a foundation to specialize in any field,” she said. “The unique aspects of Rosemead’s training, with classes in spiritual formation and theology, continue to influence my practice every day as I try to highlight the importance of purpose and meaning-making with my patients.”

2. She never saw herself serving in the Army. At Rosemead, Kopp saw many fellow students benefit from an Army scholarship for psychologists, and followed that path to an internship at Madigan Army Medical Center at Fort Lewis in Tacoma, Washington. She eventually became an Army psychologist and deployed to Afghanistan. “The most challenging aspect is losing people,” she said. “A big part of my job was meeting with soldiers after bad things happened, and while it’s an honor to meet people in those moments, it also got pretty heavy sometimes.” Kopp’s entire professional career has involved working with veterans, whether that was when she herself was actively serving in the Army or afterward.

3. She is an advocate for mental health services for veterans. “In the years since I left active duty, the hardest part is [seeing] the overwhelming need for mental health services for veterans,” she said. “I encourage Rosemead graduates to consider taking the steps to become culturally competent to work with veterans so that you can assist with meeting the need.” Right now, she is working as a psychologist at the Department of Veterans Affairs Outpatient Clinic in her hometown of Dubuque, Iowa.

4. She was recently portrayed as a character in the film The Outpost. Released in July 2020, The Outpost depicts the Battle of Kamdesh, one of the fiercest battles of the Afghanistan war. Kopp provided psychological services to soldiers involved in the battle, and the director included a character based on her. She was pleased to hear the film was going to touch on veteran mental health. “Sometimes films focus on the heroics and neglect to convey the reality of how difficult it can be to cope with the consequences of doing difficult things and losing comrades,” she said. “My role was to support them after the fact, and it’s been an honor to be even on the periphery while the rest of the world begins to understand how amazing their story is.”

5. She is most proud of her service in the Army. “There aren’t many things in my life that bring me more pride than to have served,” she said.