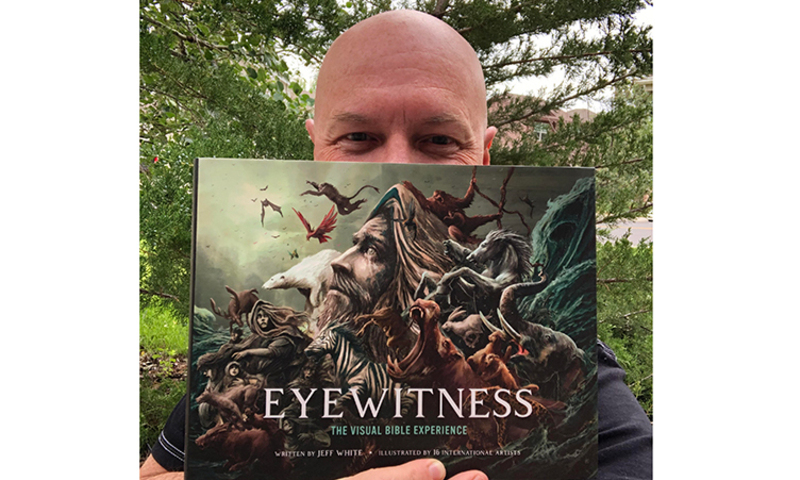 For those who have heard the stories of Abraham, David and Jesus their whole lives, it can be difficult to approach the Bible with a new set of eyes. Rather than hearing the voice of the Almighty, we hear the voice of our Sunday school teachers. But what if we could encounter these stories for the first time again as adults? This is exactly what Jeff White (’91) hopes you’ll experience when you read his new book, Eyewitness: The Visual Bible Experience.

Eyewitness is a first-of-its-kind story Bible designed specifically for adults. It takes classic Bible stories, retells them from a first-person perspective and pairs them with art by 16 international artists. The goal is not to replace Scripture, but rather to shake up the safe and sanitized versions of Scripture that we adopt as children and never grow out of — to encourage adult readers to return to Scripture with a fresh set of eyes.

The idea for Eyewitness emerged after White published a children’s Bible called Friends with God. At the time, White was a children’s author and creative director at Group Publishing, a Christian publishing agency where he served for 21 years until he was forced to leave due to Covid-19. They wanted to create a children’s Bible that was different, and decided to write each Bible story from the perspective of one of its characters.

“As we were talking with people about it and showing people the book, one of the comments that we heard a lot was, ‘Man, I wish they had something like this for adults,’” White said.

“One thing that we thought would be really appealing to people was if every story had a different type of illustration, a different artist’s version of that story,” he said.

White and his team contracted with 16 different artists from around the world: China, Columbia, Russia, Indonesia, Spain, Greece and more. They shared both the Scripture account, as well as White’s retellings, and told the artists to interpret the stories in a way that was meaningful to them. For many, it was their first time ever hearing these stories. The result is a stunning, diverse and unconventional set of artistic interpretations.

As for the writing, White wanted to offer readers a complete overview of the Bible from Genesis through Revelation. Even though each story would be a retelling infused with rich first-person emotion, he wanted to stay true to the Scripture accounts.

“We don’t add characters,” White said. “We don’t change the way things turned out. But we take the basic story and add all those layers of emotion to it.”

Because it’s written for grown-ups, the book doesn’t shy away from the harder realities of Scripture. It dives into the perspectives of Eve and Esther, Sarah and Satan, Joseph and Jesus, and aims to offer the reality of their experiences without sugarcoating what would be too intense for children.

“We have this perception of the Bible being this safe, clean, G-rated book when the opposite really is true,” White said. “There’s some really awful stuff in there. So when we created a story Bible for adults, we didn’t shy away from that. When we tell the story of Esther, we talk about the sex and about how rough her situation was. … The book is good, relevant and appropriate for teenagers, but we keep it honest.”

The result, for many readers, is a Bible that feels real and relatable — that subverts their Sunday school expectations and allows them to return to Scripture and see it as something meaningful and relevant.