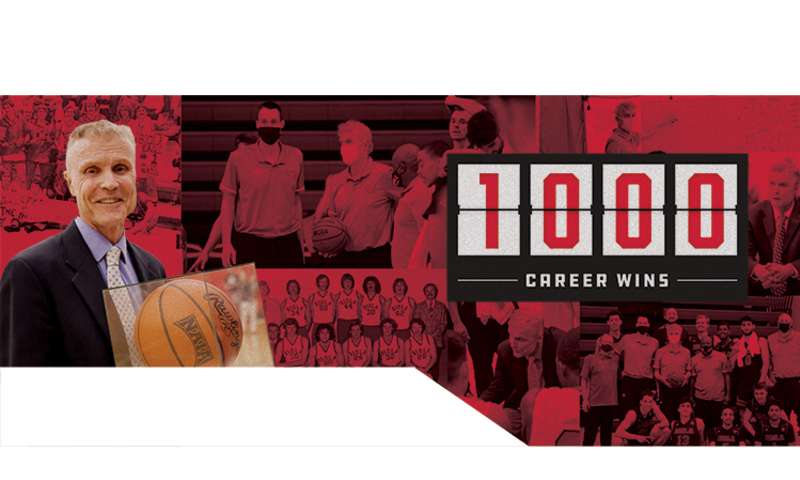 The achievement earned Holmquist a segment on ESPN’s “SportsCenter,” a feature article in the Los Angeles Times, an extended interview on CBS Los Angeles’ “Sports Central” and other recognitions. In March, he was named PacWest Coach of the Year — the ninth time in his 41 seasons at Biola that he has earned district or conference coach of the year honors.

“I just feel very blessed and thankful to have worked at Biola all these years,” Holmquist said. “To be able to have worked for the kind of people I’ve been able to work with — the players and the administrators and other faculty. It’s just been a great experience.”

During the 2020–21 season — which featured empty stands, masked sidelines and an abbreviated schedule, all due to Covid-19 — Holmquist led the Eagles to their first NCAA Division II postseason victory and a 10–4 overall record. The team advanced to the second round of the NCAA Division II West Region Championship before ultimately falling to the Colorado School of Mines.

He finished the season with a career record of 1,002–410, putting him in an elite club with only four other men’s college basketball coaches with more than 1,000 victories: Mike Krzyzewski (Duke University), Herb Magee (Thomas Jefferson University), Harry Statham (McKendree University) and Danny Miles (Oregon Institute of Technology).

“Coach Holmquist is the type of leader that sees and brings out the best in others,” said Bethany Miller, senior director of athletics. “He has done this since 1978 in the lives of countless students and staff members. This historic win mark is a reflection of both his intense competitiveness and coaching prowess as well as his deep relational care for people.”

Holmquist, a three-time Biola graduate, began his coaching career in 1975 at Fresno Pacific University, where he earned his first 36 victories over the course of three seasons. After taking the helm at Biola in 1978, he found early success, including a victory in the 1983–84 National Christian College Athletic Association championship.

Over the course of his 41 seasons at Biola, Holmquist has maintained a staggering .725 winning percentage, with only two losing seasons along the way — both of which came during the first year of transitioning to a new conference (the Golden State Athletic Conference in 1994–95 and the PacWest Conference in 2017–18). During that time, he coached Biola to 21 appearances at the NAIA National Championship tournament. He also spent 27 years as Biola’s athletic director. In addition to coaching, he devoted himself to education, earning five master’s degrees (physical education; marriage, family and child counseling; European history; theology; philosophy) and a Ph.D. in physical education from the University of Southern California.

Having crossed the 1,000-win threshold, Holmquist shows no signs of slowing down. “I still enjoy it,” he told the Los Angeles Times. “As long as I stay healthy and I feel like I have sufficient energy and still enjoy it, I want to keep doing it.”