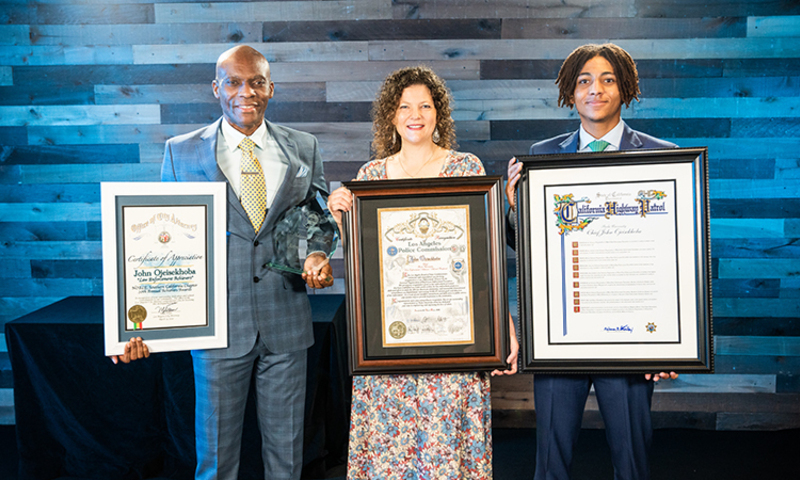 Biola’s top campus safety official was recognized by several law enforcement organizations this spring for his exemplary leadership and dedication to service.

“Chief John Ojeisekhoba is regarded on our campus not only as a paragon of campus safety professionalism but also as a man who embodies the grace and love of our shared faith community,” President Barry H. Corey said during an award presentation at Biola. “On Chief John’s watch, Biola has been recognized as one of the safest college campuses in the country, with outstanding officers and staff hired and developed under [his] leadership.”

In addition to leading Biola’s campus safety and emergency preparedness efforts, Ojeisekhoba is highly sought out for consulting work with universities and organizations across the nation. He has taught self-defense classes as a Biola adjunct professor since 2003. He also serves as a reserve police officer for the Garden Grove Police Department.

In 2015, he was named “Campus Safety Director of the Year” by Campus Safety magazine. And in 2019, he received the President’s Award from the International Association of Campus Law Enforcement Administrators (IACLEA), an organization for which he now serves as vice president for finance.

The latest accolades recognized him for valuable contributions to his communities and unselfish commitment and dedication to public service.

“Chief John Ojeisekhoba has garnered the respect of his employees, peers, allied agency leaders and members of the public for his dedication, expertise and professionalism in law enforcement,” the resolution from the California Highway Patrol read.