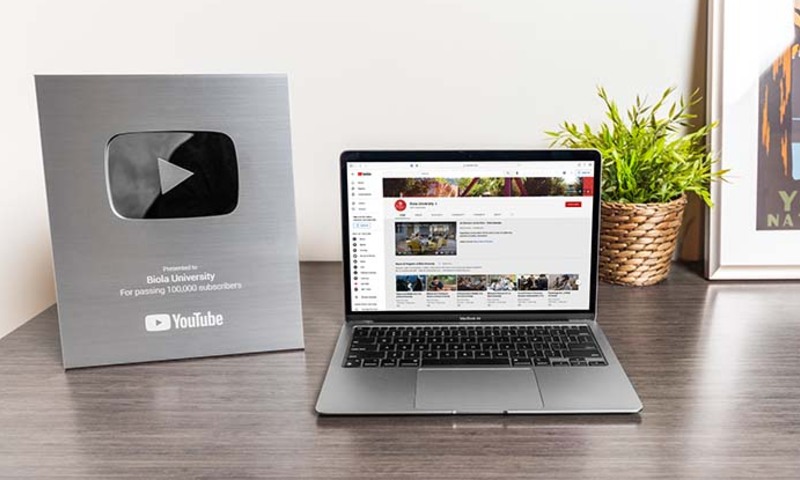 Biola has joined an exclusive group of colleges to achieve YouTube’s “Silver Creator Award” status, a designation given to accounts with 100,000 or more subscribers.

The university’s channel — which offers hundreds of resources, including lectures, debates, sermons, roundtable discussions and promotional videos — reached the milestone in November 2021, putting Biola in the company of a small number of American universities that have crossed the 100,000-subscriber threshold.

Among all universities in the United States, Biola ranked 15th in total subscribers in the most recent analysis from uniRank, an international higher education directory.

“We’re gratified to see Biola’s channel continue to be one of the most popular university-run channels on YouTube,” said Brian Miller, associate vice president for university marketing. “Ultimately, our aim is to reach people with educational content that will equip them to engage the culture from a biblical perspective — so it’s encouraging to see that there’s such a strong appetite for these resources.”

Among the most popular videos on Biola’s channel are a debate on “Does God Exist?” between Christian philosopher William Lane Craig and the late atheist Christopher Hitchens, with 5 million views; a series of lectures on apologetics to Islam by the late Nabeel Qureshi (M.A. ’08), with 2.6 million combined views, and a time-stopping illusion featuring social media star Zach King (B.A.’12) and President Barry H. Corey, with nearly 1 million views.

Explore Biola’s channel and join the ranks of subscribers at youtube.com/biolauniversity.