Isaac Peterson persisted as a remote international student during the pandemic 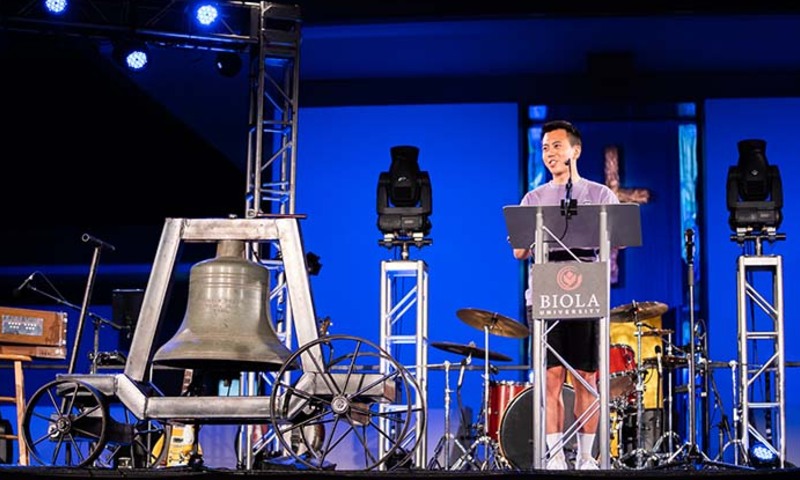 When Isaac Peterson applied to Biola, he didn’t expect to be taking classes from 5,000 miles away at strange hours of the night. But thanks to the pandemic, that’s how his journey as a student began — stuck studying halfway across the globe at his home in Manchester, England, due to government health restrictions.

Even so, despite the remote start, Peterson felt the warm and welcoming spirit that he says pervades Biola’s campus.

“Thanks to my professors, my room transformed from a dark cage where I felt forever doomed to Zoom to a hopeful place where I encountered caring professors during class time and office hours,” Peterson said.

One year later, the Torrey Honors College student made it to campus and found himself on stage at one of Biola’s treasured orientation traditions — the communion service on opening weekend — sharing his testimony and experience at Biola thus far. It wasn’t the easiest journey to get to Biola, though.

A rocky two-year experience in medical school years ago left Peterson broken, confused and without a degree. He was unsure of his next step and felt as if he was without guidance.

“Academically, the professors there were some of the best in their fields, but it felt as though they weren’t concerned about me at all beyond my grades, especially when I needed them the most,” Peterson said.

His two years in medical school may have left him feeling broken, but it also drove him down a new path to find purpose and a future career path. He discovered a deep desire for a biblically based education. Peterson attended a small church and Bible college in York, England, where he first heard about Biola. Many of his teachers or guest lecturers knew of Biola or had read or studied books written by Biola professors. As he continued to hear about Biola, he knew it was the place God was calling him to be. Though remote, his first year at Biola confirmed that for him.

“In every interaction with my professors, I could sense that they cared about and prayed for my development as an adopted child of God and that they would still show the same care and attention for me even if my grades weren’t up to scratch,” said Peterson.

When Biola announced campus was reopening, Peterson wasn’t sure if he’d make it to the United States. It wasn’t as easy as it would typically be pre-pandemic, and the financial aspect was a challenge for him.

“I come from a humble economic background, so there was no certainty that I would be allowed entry into the country,” he said. “However, through much prayer together with some of the staff and faculty, I believe God was moved to orchestrate some miraculous divine appointments with some incredibly generous Christians who contributed enough to satisfy the financial requirements of my student visa.” His U.S. student visa came through just in time. Now, Peterson is a pre-law minor and hopes to attend law school after Biola to defend the poor, the marginalized and the falsely accused. Until then, Peterson is enjoying his Torrey Honors courses and Biola community. He has settled into life at Biola and Southern California quite well, thankful to have swapped moonlight classes for sunlit studying.

“Being on campus is so refreshing,” he said. “I rotate around several favorite reading spots on campus, and I can enjoy the Southern Californian sun while doing my assignments.”