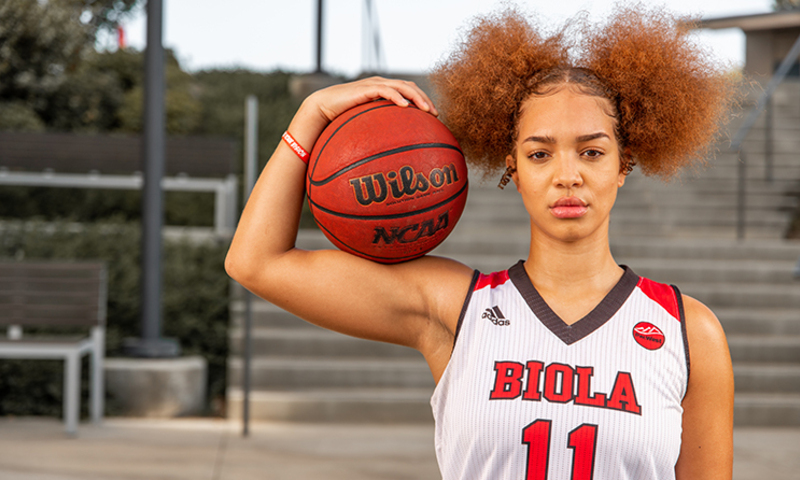 Jazmin Benn is a role model on campus, a beauty care model off campus, and one of the most successful women’s basketball players in Biola history. Her friends call her “Jazz.”

Benn grew up in Germany, and started playing basketball when she was 8. When she was 14, she was invited to try out for the national team, but she and her family moved to the United States. She continued playing varsity through high school; then, to get recruited for college, she joined the Cal Sparks, an Amateur Athletic Union (AAU) basketball team, which took her playing everywhere from Los Angeles to Chicago.

Initially, she wanted to play for Cal State Fullerton, but when she came to Biola she fell in love with its smaller, supportive community.

“I have a super close bond with every single person on my team,” she said. “My coach really cares about me — not just my basketball life but anything off the court, academically, anything I want to do career-wise. He has written I don’t know how many reference letters.”

In her time at Biola, Benn became the 25th person in Biola history to score over 1,000 career points. That’s in light of about 18 fewer games due to Covid-19, and an additional four that she missed due to an injury. Even still, her biggest highlight was seeing her teammate, Stephanie Lee, get awarded PacWest Freshman of the Year.

“I’m very much a supporter,” Benn said. “Wanting my teammates to be better makes me better.”

She is also a leader. After serving as a team representative, Benn became president of the Student-Athlete Advisory Committee (SAAC) at Biola. In this position, she serves as a liaison between student-athletes and Biola’s administration, making changes across campus and voting on legislation for the NCAA. As president, she helped ensure that all students at Biola — not just student-athletes — would have access to free tutoring, and has worked hard to ensure her team’s safety and success in the midst of Covid-19.

As a senior, she served as one of the team captains of the women’s basketball team. She strives, she said, to lead in a way where everything she does — on and off the court — helps her teammates grow.

When the pandemic struck, she and her fellow athletes did not know if they would play again. As SAAC president, she worked with Biola’s administration to help bring student-athletes back on campus, and found ways through Zoom, goodie bags and more to foster community in the midst of quarantine. When student-athletes were allowed back, she and her team had the longest preseason in history, not knowing if they would ever get to compete.

Really reminding the team that this is not the end, and we’re not just playing for these games, but this is a stepping stone into the next season, and just really making sure that we get everyone better every day.”

When they finally got to compete again, they won their first game.

During quarantine, Benn discovered new hobbies like roller skating, and even started modeling. For her, quarantine was an opportunity to grow closer to family. She worked out and played basketball with her brother almost every day.

After graduation, Benn plans to get her master’s in business administration, then return to Germany to play professional basketball and model on the side. She also hopes, at some point, to go to law school in the United States and become a sports agent.

“My relationship with God is what really drives me to do everything,” she said. “It’s not that I do things and I wiggle my faith into there. It’s really the more that I accomplish, that just shows how my relationship with him is growing and strengthening because I could not do anything without Jesus.”