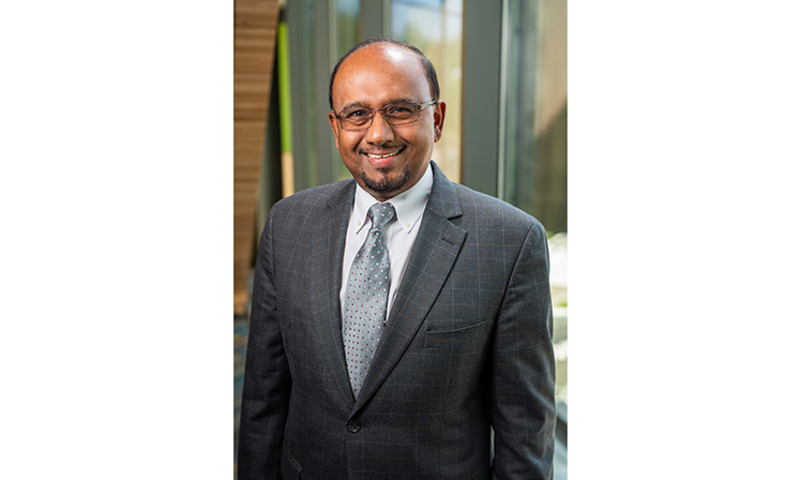 The Biola scientist is part of a team of researchers who are making advances in using “nanomachines” to drill holes into cancer cells and drug-resistant bacteria. Over the past few years, the researchers have successfully experimented with programming motorized molecules to target and destroy harmful cells in a laboratory setting — a discovery that could hold promise for eventual treatment in humans, he said.

“These little molecules can be activated to rotate at 2 to 3 million revolutions per second with a particular light, and we’re able to target specific types of cells,” explained Gunasekera, associate dean of academic and research affairs in Biola’s School of Science, Technology and Health.

The “machines” are actually organic molecules that are synthesized mainly from carbon, hydrogen and oxygen, and they’re so small that about 50,000 can fit across the diameter of a human hair, Gunasekera said. The original concepts for this technology was pioneered over a period of decades by a trio of scientists who won the 2016 Nobel Prize in Chemistry for their work. However, Gunasekera’s work — conducted in partnership with James Tour, a renowned chemist at Rice University who is inventing these nanomolecules — involves exploring the applications of the technology for biomedical uses for the first time.

In 2017, Tour and fellow team members published an initial study in Nature that detailed their work in killing various types of cancer cells and acknowledged Gunasekera’s work. Gunasekera co-authored a follow-up study in May 2019 in the American Chemical Society journal ACS Nano that reported further advances in the breast cancer-targeting research.

More recently, Gunasekera and colleague Don Galbadage, associate professor of public health at Biola, have been experimenting with the technology on “superbugs” that have grown resistant to antibiotic drugs. Compared to cancer cells, which only have a thin cell membrane that are easier to puncture, Klebsiella pneumoniae bacteria have a three-layer cell wall, making them more difficult to kill.

“We experimented on millions of cells, and we found that the nanomachines were not killing all of the bacteria — only about 40%,” Gunasekera said. “It’s great that they’re killing that many, but that’s not going to cure anybody. They’re still going to be sick. So at that point we said, ‘Let’s add the drug (Meropenem) and see what it’s able to do.’ And voila, 95% of them were killed. That was a big deal.”

In essence, the nanomachines had damaged the resistant bacteria walls enough for the previously ineffective antibiotics to get in and finish them off, Gunasekera said. The Biola professors’ research was published in ACS Nano in December 2019.

In February 2020, Gunasekera and Galbadage co-authored yet another paper in ACS Applied Materials & Interfaces, detailing use of the nanodrills in vivo for the first time in model experimental species such as worms, plankton and mice.

Part of the appeal of coming to Biola, he said, is his ability to openly integrate his faith with his scientific pursuits. He’s able to more openly talk about the scientific evidence that clearly points to the existence of a designer, he said.

“God was directing me to do science with the design component, where I could have the freedom to do it, rather than doing it at secular universities where I would have to be silent with the evidence of my observations,” he said. “This seemed to be where God really wanted me to be. It’s really a calling and it’s a privilege to be at Biola.”

In his role as associate dean, he provides leadership and support to faculty and works to develop greater research opportunities and partnerships. With the Lim Center — a new state-of-the-art facility — and professors with doctoral degrees from leading institutions such as UCLA, USC, Johns Hopkins, Yale and more, Biola is doing impressive and innovative work in the sciences, he said.

“We all want the community at large to know that Biola is playing hardball — with serious science,” he said. “We don’t want to be the best-kept secret.”